Razorbacks catch up with California wing 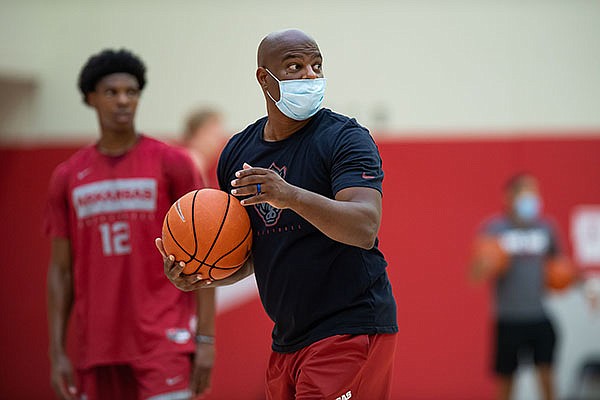 Patrick extended a scholarship offer to Mashack while at California-Riverside when Mashack was a sophomore. Communication with Patrick and Coach Eric Musselman is going well for Mashack.

“Trying to build a relationship since they kind of started recruiting me a little later than everyone else, but Coach Patrick knew me from California, so as soon as he got hired he made sure they knew about me,” Mashack said. “Coach Musselman is real cool and down to earth.”

Mashack, 6-4, 192 pounds, of Etiwanda, Calif., received an offer from the Hogs on July 27 to go along with ones from Arizona, Louisville, Oklahoma, Tennessee, Texas, Colorado, California and others.

Mashack said recently that Arkansas, California, Texas, Tennessee, Oklahoma, Arizona and Colorado were prioritizing him. Unfortunately, an injury and the coronavirus have kept him from visiting the campuses of the seven schools.

“I was hurt all last summer and you know what happened this spring, so haven’t taken any visits,” he said.

Mashack said Arkansas coming in late does present challenges for the Hogs in trying to land him, but admits the Razorbacks are working hard.

“It’s hard without the visits right now, but they’re doing what they can to make up for lost time,” Mashack said.

A recent virtual tour with Arkansas was well received by Mashack.

“All the facilities are top and it seems like it’s a college town,” Mashack said. “The campus is awesome.”

Mashack is impressed with Musselman and his staff’s NBA experience.

In addition to Musselman’s well-documented NBA background, Patrick was a scout for the Houston Rockets in 2010-12, assistant Corey Williams played with Michael Jordan and the Chicago Bulls in 1992-93 and the Minnesota Timberwolves in 1993-94, while assistant Clay Moser has a vast NBA resume with his previous stop being the Los Angeles Lakers.

Director of student-athlete development Earl Boykins played in the NBA for 13 years.

“Combined they have a lot,” said Mashack of NBA experience. “Also, that he [Musselman] knows how to get players to the next level because he’s coached at that level.”

“It’s definitely something to take seriously,” Mashack said. “Being around people who have been where you wanna go is important.”

Mashack plans to make his college decision at the end of September or October and signed during the early signing period on Nov. 11-18.

Not being able to make visits will make his decision a challenge.

“Just Zooms and calls,” Mashack said. “Try to talk to people in the program and players. It’s hard though.”

When Mashack does ink with a school, he’ll do so without his beloved grandmother Debbie Phillips at his side. She died from covid-19 on May 19.

“My Nani was the most loving person I have ever met in my life,” Mashack said. “Everyone loved her because she was kind and loving all day, everyday. She was at all my games with my granddad. We are all trying to keep moving forward [because] without her it’s tough especially for my mom and granddad. But I know she would be so happy for me. She would be filling out March Madness brackets saying I’ll be playing for one of the teams one day.”