State of the Hogs: LeBlanc has long had Arkansas ties 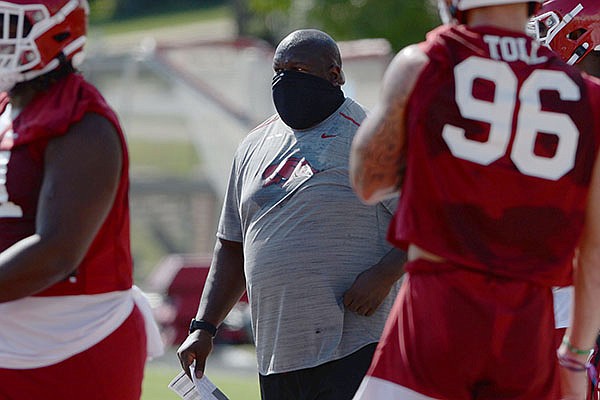 Earlier this spring in a Zoom one-on-one interview, Quinn Grovey raised his eyebrows as the word came there is a notable Frank Broyles tie with new Arkansas defensive line coach Derrick LeBlanc.

“That’s royalty in this state,” Grovey said as LeBlanc revealed that his first four years as a college assistant coach were under Jesse Branch at Henderson State.

Branch was an All-Southwest Conference halfback for Broyles in 1962. He later coached wide receivers for Broyles, and then was retained by Lou Holtz and Ken Hatfield before becoming a head coach at Missouri State. Branch is in the UA Hall of Honor and the Arkansas Sports Hall of Fame.

When Branch retired from coaching in 1994, Broyles hired him as an associate athletic director. Branch came out of coaching retirement to take a Henderson program that was at low tide.

LeBlanc got the call to join that Henderson staff in 2001 thanks to a good word from Henderson athletic director Sam Goodwin. LeBlanc, who played high school football at Breaux Bridge, La., played for Goodwin at Northwestern (La.) State.

It was time for “phone a friend” to get the LeBlanc scouting report. Branch, retired in Hot Springs Village, was excited to give it. He said he liked the hire of Sam Pittman as head coach, but even more when he learned LeBlanc would coach the defensive line.

“’Holy mackerel’ was what I thought,” Branch said. “What a hire Sam made, just wonderful. When I heard, I just thought, this is great. He’s the kind of guy who makes a difference in your program.

“What I’ll tell you is that he is the sharpest, smartest coach I’ve ever been around. Gee whiz, I couldn’t believe it.”

LeBlanc chuckled as the Branch interview was relayed.

“Wow, that’s big,” LeBlanc said. “I’ve never heard anyone say anything like that about me.”

LeBlanc is unique for a defensive line coach. Not many have a degree in business. Branch just said he gave LeBlanc the entire business when he got to Arkadelphia.

“I did, about everything,” Branch said. “He coached our defensive line, handled our strength and conditioning program and led our academic staff. We had him do everything.

“He was the first person in the building and the last to leave. He was a great assistant coach. He always worked hard at everything he did, too.”

LeBlanc said it was just a matter of soaking up knowledge.

“I was so happy to work for a man like Coach Branch,” LeBlanc said. “I learned so much from Coach Branch. It was how to be demanding to players without being demeaning, but it was also just how to carry yourself. He taught us the way you treated your wife and conducted yourself in the community.

“I worked for him for four years and they were four great years. My wife and family loved Arkadelphia and I owe a lot to Coach Branch.”

LeBlanc has lifelong friends from those Arkadelphia days.

“Niema and I were married by pastor Llewellyn Terry at Mount Olive Baptist,” LeBlanc said. “We still keep up with friends at that church.”

Branch hit on the key point about the Pittman hire. Most focus on the coordinators. They are solid with Kendal Briles on offense, Barry Odom on defense.

But if the key to winning in the SEC is what happens in line play, then the hires of Brad Davis in the offensive line and LeBlanc on defense might be more important.

“You win in the trenches,” Branch said. “Sam has got two good ones there from everything I’ve been told.”

Davis was probably the critical recommendation for LeBlanc in the move to Arkansas from Kentucky. Davis and LeBlanc coached together at North Texas in 2016.

“I reached out to Coach Pittman,” LeBlanc said. “He had hired Brad and I’ve been friends with Brad since 2006. We met at the (coaches) convention. Then, we worked together at North Texas.

“If you are coaching the defensive line, the working relationship with the O-line coach is really important. That’s the environment you are going to be in every day in practice. So that was part of why I called (Pittman).”

Then, there was the love of Arkansas.

“I had four years in Arkadelphia, then one year in Russellville (at Arkansas Tech),” LeBlanc said. “I knew Arkansas. I also had two years at Missouri State and I recruited Bentonville to Fort Smith. So that was seven years in a row of being in Arkansas.”

During much of that time, there were regular trips to Fayetteville.

“Our staff at Henderson came to clinics on campus when (Houston Nutt) was there,” LeBlanc said. “I always enjoyed the state and always knew the love for the Razorbacks that was everywhere.

“You saw it every day on our campus at Henderson. Everyone there – all the students – wore Arkansas Razorback gear.”

LeBlanc knew Davis, but he also wanted to work for Pittman. Competing against Pittman’s offensive lines at Georgia was motivation every day of the week.

“I started hearing about Coach Pittman when he was at North Carolina,” LeBlanc said. “I knew he had ability to coach and a great personality. When I got to Kentucky, you realized quickly that Georgia was at the top of our division and he was their O-line coach.

“So I began to tell our players that to compete in the league, we had to prepare for the best team we were going to play and that was Georgia. They were recruiting great offensive linemen at Georgia and we had to figure out a way to compete with them.

“It was our motivation throughout the summer. Players compete against players, but coaches compete, too. My motivation to work hard was (Pittman) at Georgia. You want to see how you stack up. We didn’t work in our offseason program because we were getting ready for Louisville. It was to be ready for Georgia.”

LeBlanc always stacked up with the best. His defensive lines were always top shelf at Kentucky. Tough is the word everyone used to describe his line.

“That would be what I’d say,” Branch said. “You have tough players because you work hard. I know he had that when I got him at Henderson. He just worked so hard.”

LeBlanc said those Georgia battles all three years were meaningful.

“You knew you were going against the best, both the players and the coach,” LeBlanc said. “The first year, they lit us up. The second year, it was competitive. You could say we were playing for the (SEC) East title. Last year, in the rain storm, we played pretty well.

“I wanted to work with (Pittman) here. I admired him, the standard he set. I didn’t know him personally, but when he got the job here, it was a no brainer to reach out.”

It was all about going big.

“What we want to do is play big-boy football,” LeBlanc said. “Big is important here. It’s important in recruiting and in development.”

LeBlanc said it’s not enough to be big to be dominant.

“You gotta be tough,” he said. “I really believe that the toughest position to play on the field is the defensive line and to play it well, you better be tough. You better be durable.

“When you go on the field, you have to be able to flip the switch and be angry. Our goal in recruiting is to find tough kids who want to grind it out. We are going to earn our pay check every day and that means work.”

It’s too early to know if the Hogs will have that this year, but LeBlanc said he likes his defensive line room.

“It’s exciting to be in there with them,” he said. “We are being demanding and they want to do everything.

“My room is hungry for knowledge. They have a desire to win. They want it.”

The most experienced player in the room is defensive tackle Jonathan Marshall.

“He is from the aspect of who was on the team last year,” LeBlanc said. “We also have Xavier Kelly, a big old boy. He’s got to prove it here, but does have the size.”

Kelly is a graduate transfer from Clemson. He’s got tree trunks for arms and a solid lower body.

The other key older players are Dorian Gerald and Julius Coates, both former junior college stars. Gerald played at Arkansas in 2018, then took a medical redshirt last season after straining a neck artery in the opener. Coates arrived this winter from East Mississippi Community College of Netflix fame.

“Coates is a good looking player with a lot of raw talent,” LeBlanc said. “He’s interesting in that he played wide receiver and corner in high school at 6-foot-4. He was skin and bones.”

After playing tight end his first year of junior college, Coates moved to defensive end as a sophomore.

“He’s up to 295 now and looks like a defensive end,” LeBlanc said. “His next two years are going to be interesting to see where he can go.

“Gerald is pretty athletic for that size. And, he’s got some experience at this level.”

No one else has much experience.

“Eric Gregory, Mataio Soli, Zach Williams and Taurean Carter are among those younger ones battling,” LeBlanc said. “We just have a few older players and all these young ones. There just isn’t much in between.”

The goal is to find some tough players to battle an awesome 10-game SEC schedule. It’s the toughest ever given an Arkansas team, or maybe any team anywhere. The assignment is to disrupt all the fancy spread offenses that have permeated the league.

“What I know is that there may be a lot of spread now, but the SEC is still a line of scrimmage league,” LeBlanc said. “Toughness is the most important factor in playing football.

“I learned that from Coach Branch. We inherited a team at Henderson with only 27 returning players. Coach Branch said, ‘Don’t ever forget you don’t have to be as good as the other team, just tougher.’ Toughness is going to factor into every game. Tough guys win.”

If Branch didn’t learn that from Broyles, then he might have learned it from Wilson Matthews, the Broyles assistant who ran a legendary offseason program.

It’s the kind of stuff that makes someone like Grovey raise his eyebrows.