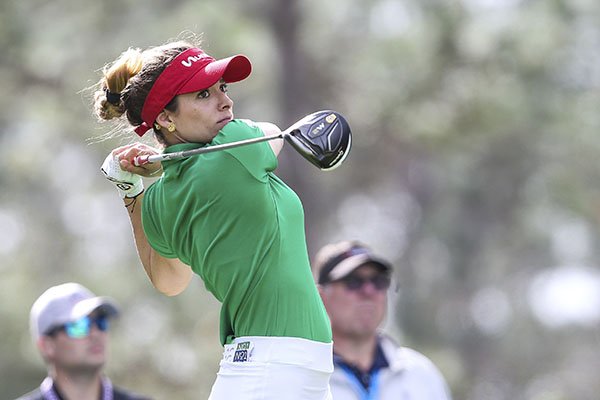 Gaby Lopez drives from the 2nd tee during during the final round of the Tournament of Champions LPGA golf tournament Sunday, Jan. 19, 2020, in Lake Buena Vista, Fla. (AP Photo/Gary McCullough)

Gaby Lopez thought she had done everything right.

She wore her facial covering in public. She practiced social distancing. She sanitized her hands multiple times a day.

After winning the second LPGA Tour event of her career in January, Lopez and the rest of the tour players were put on hiatus because of the coronavirus in March. A restart was planned for July, then later pushed back to late July.

Lopez, who had spent most of the pandemic at home in Mexico City, traveled to Toledo, Ohio, for the Drive On Championship. Lopez said she tested negative for covid-19 before she left for Ohio, but when she arrived at the Inverness Club, she was tested again and the result was positive.

"It was a little surprising, to be honest," Lopez said last week from Mexico City. "The Thursday before that Monday, I tested negative. So it had to be somewhere in my travel up to Ohio where I contracted it. I think it had to be that or maybe at the grocery store that I bought, and maybe I didn't clean it that well. I can't be sure, but I think it was from the travel."

After testing positive, Lopez was required to quarantine for 10 days before being retested. She missed both events in Ohio, then chose to remain in Mexico City when the tour moved to Scotland for the Scottish Open. She was able to compete in this weekend's British Open at historic Royal Troon, where she sits in a tie for 63rd place at 13 over.

Lopez said her symptoms were mild, with just a light headache and dry throat. She said she never ran a high fever and did not have the body ache that has been associated with the virus.

"I was a little tired for two or three days," she said. "But I mean, the max amount of days that I was sick was like three days. I've had no symptoms now for almost two weeks."

The former University of Arkansas star will be fired up to return to Rogers this week for the NW Arkansas Championship. Lopez, along with former Razorbacks Stacy Lewis and Maria Fassi, are always fan favorites, although that won't be the case this year as fans will not be permitted at Pinnacle Country Club because of the pandemic.

Fassi said she was shocked when she learned Lopez had tested positive for the virus.

"When I first heard it, I could not believe it," Fassi said last week as she prepared for the British Open. "But there is just so much about the virus we don't know. It's scary because I know that Gaby was very cautious. You just can't take anything for granted. I'm just trying to be as cautious as I can."

LPGA Commissioner Mike Wahn said there have been two players on the tour test positive, and two others on the Symetra Tour. Wahn said those positives came when the tour first restarted. He also said a couple of caddies had tested positive.

Because of those positives, others close to the players and caddies also had to be quarantined, Wahn said.

"We've dealt with our share of quarantines and challenges," he said. "Gaby's was a tough one. Literally she took the test before she left Texas to fly to northwest Ohio, and then when we tested on arrival, she tested positive. But she went through her 10 days, so she's had it, been through it, and come out the other side.

"Typical Gaby form. I've never met a tougher person and player. She went through it, she got over it and she's playing once again after three weeks. The good news is that she is back on form."

Lopez said she learned a lot after contracting covid-19, and she is using her platform as one of the world's top golfers to educate others about the virus and how they can return to a normal lifestyle.

"I believe that 99% of the people will recover," Lopez said. "Not because I did. People say, well, you're an athlete and you are strong. Yes, but I have friends who tested positive. We can't underestimate it, but we have to start going back to our lifestyle so that we can get everything back to where it was like jobs and sports.

"The fans are upset because they can't go to baseball games, or basketball games. We have to find a way, using all the precautions, to be able to be a little more fearless of this."

TICKETS There are no tickets available for this event. Fans will not be permitted under covid-19 guidelines.

Chip Souza can be reached at [email protected] or on Twitter @NWAChip.