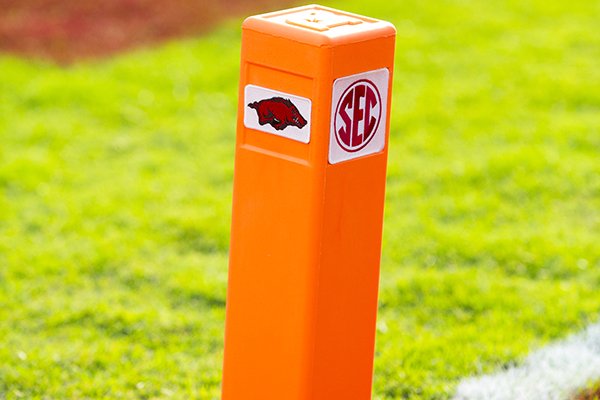 A pylon is shown prior to a game between Arkansas and San Jose State on Saturday, Sept. 21, 2019, in Fayetteville.

After two weeks of thinking about it, it could appear the University of Arkansas got a hand-engraved invitation to join the Big 12.

When the SEC announced it would go to a 10-game conference only schedule this fall, there was interest and excitement about who the Arkansas Razorbacks would get.

Surely, Vanderbilt would be one of the teams. The Commodores and the Hogs were last season’s cellar dwellers, winning one conference game between them, and it wasn’t the Razorbacks getting that win.

Without so much as a drum roll, it was announced the Razorbacks’ new opponents would be No. 4 Georgia and No. 8 Florida.

It was crushing news for a program that is on its fifth new head coach since 2008, is coming off back-to-back 2-10 seasons and has managed one winning conference record in the past eight years.

Maybe the SEC didn’t point at the doorknob and say don’t let it hit you the backside on the way out, but forcing the worst football team in the conference to play two of the best was more than a slap in the face.

It was a kick in the teeth.

It seems so obvious what the league was doing, and always has been accused of doing. It was taking care of the cream of the crop, even if it cost several programs dearly.

Admittedly, the Razorbacks’ fall has had nothing to do with the SEC.

The Hogs and their woes have become popular fodder on some sports websites, quoting unnamed coaches as saying the program has no identity and looks like a team on NCAA probation.

The Razorbacks have been through a weird transition.

Bret Bielema was a Big Ten coach through and through. A very successful one when he was up north.

Smash-mouth football no longer works in the SEC.

It was created in the SEC, but a few years ago the last semblance of it — other than the Hogs — was gone when Alabama’s Nick Saban hired Lane Kiffin as his offensive coordinator.

Bielema was fired, and Chad Morris was hired.

Morris tried to make a train become a plane.

He didn’t have the personnel for the offense he wanted to run. Some of his own transfers weren’t up to the speed he needed.

On paper, Morris looked like a good hire, although it remains a mystery whether Hunter Yurachek — who had zero input on the hire — would have hired him.

On the field, Morris looked more like an offensive coordinator than a field general demanding discipline from his troops.

Morris will do well as offensive coordinator at Auburn under Gus Malzahn’s leadership.

Just how bad it has become at Arkansas was never more apparent than when three of the coaches Yurachek interviewed ended up at other SEC schools.

Finally, Yurachek went with the guy who really wanted the job. He wanted a chance more than he wanted money. A coach who came to love Arkansas so much during his time as an assistant here that he bought land on which to build his retirement home.

Before the coronavirus pandemic, it appeared Pittman had a real shot to win at least three games this season — all the nonconference games other than Notre Dame.

Now, 0-10 seems possible. Las Vegas oddsmakers have an over-under bet that the Razorbacks will win 1.5 games.

Perhaps the biggest challenge Pittman and his staff face this season is keeping the team from getting frustrated and discouraged.

The Razorbacks will be better, but there is no sign that any team in the SEC is going backward.

It is the toughest schedule in football history, thanks to the SEC.