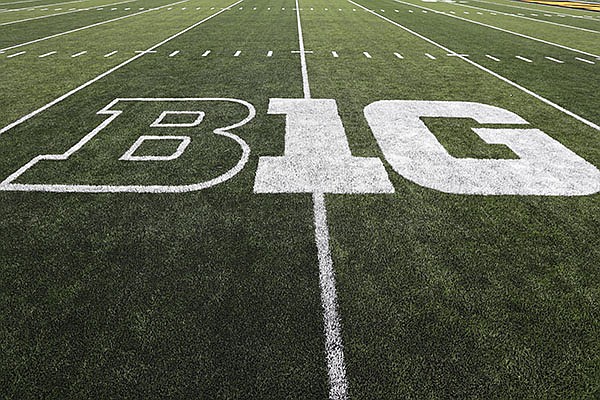 The Big Ten logo is seen on the field before an NCAA college football game between Iowa and Miami of Ohio, Saturday, Aug. 31, 2019, in Iowa City, Iowa. (AP Photo/Charlie Neibergall)

The SEC commissioner has led several steps toward college football being played this fall.

The first was gaining approval from the league’s presidents to move forward.

Then to have a 10-game, conference-only schedule.

Yet, he admits to being cautiously optimistic about playing this season.

If Monday’s annnouncement by College Football Playoff executive director Bill Hancock is any indication, college football took a big — but safe — step by announcing the dates of the CFP ranking shows.

They are this fall. None are slated for the spring.

That means the 2020 national champion will come from one of 76 BCS teams who are committed to playing this season.

The SEC, Big 12, ACC, American Athletic, Conference USA and Sun Belt — along with some independents — are playing this fall.

That likely means the Big 12 and ACC each get one team in the playoff, and the SEC will get two, which may have something to do with Georgia and Florida adding Arkansas to their schedules.

No decision has been made by the playoff committee that there won’t be a spring championship, but that’s the wrong year and would likely be between the Big Ten and Pac-12 only.

If they decide to have a second champion from the spring, how many people will actually recognize that accomplishment? Probably not many.

Of the past 15 national championships, 10 were won by SEC teams (Alabama has five of those), three by the ACC, and one apiece by the Big Ten and Big 12.

Does the playoff really need the Pac-12 or Big Ten as long as it has the SEC and ACC?

Speaking of Alabama, Nick Saban has a way of trying to say things that make him seem genuinely magnanimous if you don’t consider what he didn’t say.

This week, Saban said playing football this season is not about the money. It is all about the players.

Someone, somewhere may have believed him.

There have been dozens of stories on what not having a season would do financially to conferences and schools.

Ohio State and Penn State have both said they stand to lose up to $50 million.

Of course the money is important, but then think about what Saban didn’t say.

He didn’t say he was taking a cut in pay.

He may be forced to find a way to live on less than $8.8 million a year.

Last week, University of Arkansas Athletic Director Hunter Yurachek said he has cut about $3 million from the budget, mostly through salaries, including his own.

Every school is going to take a big hit with only about 30% capacity allowed to attend games.

More schools in the SEC than you might imagine have debt, mainly from facility expansions. It’s like some schools thought the TV money was endless.

It may have been until the coronavirus pandemic took out the goose that was laying the golden eggs.

In the next few weeks, schools from all over the country are going to ask their fans who can’t attend games to still pay for their tickets.

Some will, and of course some won’t.

The UA athletic department has some money in reserve, but it would be hard to imagine any school having enough to survive two years of lost millions.

Every school in America was affected when the NCAA Basketball Tournament was canceled, and for some losing some or all of their football revenue could be devastating.

Sorry, Nick. It is about the money, too.