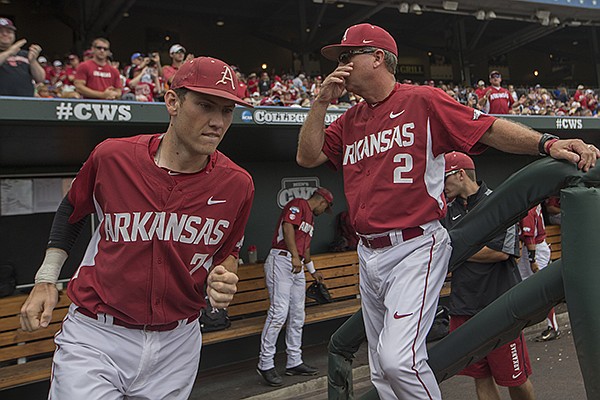 FAYETTEVILLE — As Arkansas’ starting third baseman, Bobby Wernes played a starring role in the Razorbacks’ run to the College World Series in 2015.

Last year Wernes had a less-heralded role for another Arkansas team that went to Omaha. He spent the fall of 2018 as a student assistant coach for the Razorbacks while he was finishing his undergraduate degree, but had graduated and left the program for a coaching job in the Philadelphia Phillies organization by the time the 2019 season began.

Still, his work with infielders that offseason was remembered by those who were on the 2019 team that went 46-20, won a share of the SEC West title and played in the College World Series.

“Just in that short time he was here, all the players jived with him really well,” said Jacob Nesbit, the Razorbacks’ starting third baseman in 2019 and a returner for the 2021 team. “He’s just a great guy, great coach and having him around the clubhouse is going to be huge for this team.”

Wernes hopes to have a more direct hand in Arkansas’ fortunes in 2021 and beyond. He was hired as the Razorbacks’ volunteer coach last week, replacing Taylor Smart, who spent two seasons with the program.

"We all knew he was going to be a great coach one day and he did a tremendous job in the Phillies organization," Arkansas coach Dave Van Horn said in a statement announcing Wernes’ hiring, "so much so that they made him the manager and wanted him to lead a team after one year.

“We feel Bobby has a bright future in coaching and are very fortunate to get him back here…He knows our program, our culture, our work ethic and will be a great addition to our staff and I know our players will like having him coaching them.”

The volunteer position is an influential, but often underrated role on a college baseball team. The volunteer has similar duties to full-time assistant coaches, minus off-campus recruiting. The job is unpaid, but volunteers have an opportunity to earn income through working on-campus camps.

Van Horn designates his volunteer coach to oversee catchers, and most volunteers have also served as base coaches during games. Wernes will also help coach infield and hitting.

Wernes will work with a catchers group that includes returners Casey Opitz and Cason Tollett, junior-college transfer Charlie Welch and freshman Dylan Leach. Opitz is a two-year starter who was projected to go pro this summer, but went undrafted when he didn’t come to terms with interested teams.

“Having my first year getting to work with Opitz is incredible and will make my job easier,” Wernes said.

While working with the Phillies’ Gulf Coast League team in Clearwater, Fla., Wernes gained experience coaching catchers. He played the position some through high school.

“(The Phillies) were good about letting you do anything, some experimental stuff that you weren’t really familiar with,” Wernes said. “I got an opportunity to work with some professional catchers and that will definitely help me here.”

Wernes, 26, said it was a relatively easy decision to return to Fayetteville. He and his wife, Kristina, are Arkansas graduates.

“My heart has always kind of been here,” Wernes said. “I was hoping down the road I would get a chance to come back. Fortunately for me that opportunity presented itself.

Wernes said Van Horn’s track record of advancing his volunteers’ careers was appealing, but he isn’t focused on any jobs past the one he has.

“Moving on after this, that’s something I’ve given virtually zero thought to,” Wernes said. “This is the place I want to be for the foreseeable future.”