For Pittman, no alarm clock needed 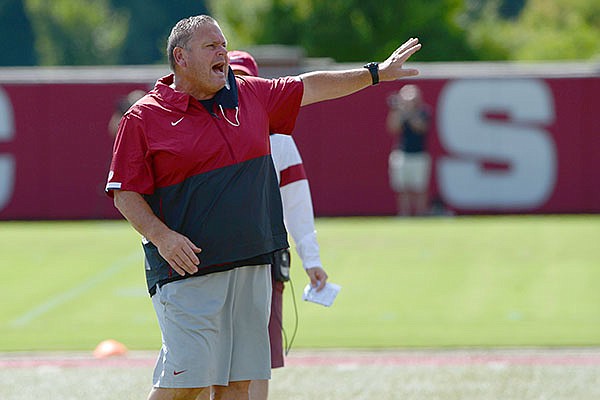 Even though he doesn’t need to, Sam Pittman does it every night.

He sets his alarm clock.

“My whole life, I’ve always woke up a minute or two before my alarm goes off,” he said. “I don’t know why it happens, but it just does.”

These days Pittman is more inspired than ever.

After 12 jobs as an assistant coach spanning four decades, he’s not about to waste his opportunity as a head coach.

Pittman is a humble man.

He’s a man of faith and prayer.

He adores his wife Jamie.

He loves every kid on his team and admires all of his coaches.

He has no baggage. The only knock on him is that he’s never been a head coach other than a short stint at a community college.

Actually, the same is true about every head coach in the country. They were an assistant until someone gave them a shot.

During Pittman’s short tenure as a head coach, there never has been a doubt he’s got what it takes to be a head coach.

Most fans look back now at when he left Arkansas for Georgia, where he became associate head coach, and see that’s when the Razorbacks began to slide.

That was not a pretty divorce, but Pittman never went public about the shouting match between him and Bret Bielema. He still won’t.

Some who heard it have talked a little.

Apparently, Pittman was embarrassed for his players when they were brought to his home in hopes of persuading him to stay. He felt the players were used.

When Pittman was cleaning out his office the next day, Bielema indicated that he had made Pittman by giving him his chance to coach at Arkansas.

If he had stayed at Arkansas with Bielema, he probably wouldn’t be the head coach today.

Pittman’s reputation is spotless, and he is known as a great recruiter, teacher and motivator.

And his transition to a head coach has been seamless.

Athletic Director Hunter Yurachek and his search committee of administrator Jon Fagg and Steve Cox — a former Razorback and NFL standout as well as a board of trustees member — probably didn’t have Pittman at the top of their list when the search began.

It took one interview in the Pittman home — the day after Georgia lost in the SEC Championship Game to LSU — for all three to quickly see they were looking at a golden opportunity.

Pittman was offered the Arkansas job as soon as the interview ended.

It doesn’t matter who else was or was not interviewed. The Razorbacks got their man.

Pittman has been a stablizing force during the pandemic for his players, staff and the program.

Nothing seems to rattle Pittman, who had given up on getting an interview for the UA job. He and his wife had prayed and given thanks for the job he had, but Fagg called to tell him they were coming for the interview.

He made the most of a shortened recruiting period and started focusing on the classes of 2021 and 2022.

He put together a top-shelf staff, including strength and conditioning coach Jamil Walker who was told, but already knew, that size matters in the SEC. Most of the players have added good weight without losing mobility.

Friday, the Razorbacks will have their first scrimmage. The first person in the stadium probably will be Sam Pittman.