Henry shines in scrimmage, but starting role at TE up for grabs 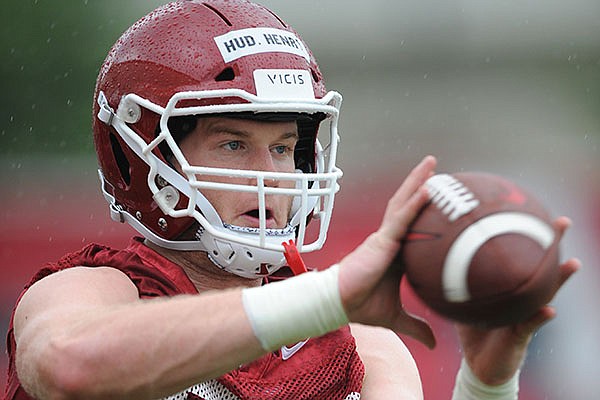 FAYETTEVILLE — Arkansas coach Sam Pittman is certain about one thing when it comes to his tight ends: He doesn't have a clue who will start in Week 1 against Georgia.

Following the departures of players such as Cheyenne O'Grady, Grayson Gunter and Chase Harrell, the Razorbacks are a young and largely inexperienced bunch at the position entering 2020.

Redshirt freshman Hudson Henry figures to be the starter if healthy, but even he has not been full-go for all of Arkansas' preseason practices through two weeks. Aside from Henry, the room is a bit of a mystery.

And the starting job is very much up for grabs.

"To be honest with you, we’re trying to find two really good tight ends," Pittman said Friday after the team's first scrimmage of the fall. "If we can get three and four, that’d be great. I’ll know a little bit more (about a potential starter) after I watch this film."

The tight ends group includes a senior in Blake Kern, but the Lamar native does not have a catch to his name since arriving on campus in 2016. And after him sit four players – Nathan Bax, Collin Sutherland, Jonas Higson, Blayne Toll – in their first season with the program.

Toll, the freshman from Hazen, has returned to the tight ends room for a second time since signing with the Razorbacks, Pittman said Friday. He began preseason practices as a defensive end.

While there is a great deal of uncertainty, Henry appears to have put his best foot forward in Friday's action. He caught a pair of red-zone touchdown passes from projected starting quarterback Feleipe Franks, according to a team spokesperson.

Pittman said it was nice to see that kind of play from the former Pulaski Academy standout.

"He broke a tackle and got in the end zone," he added. "It was good to see him have some success. I was proud of that tight end position today."

Prior to the start of preseason practices, Arkansas offensive coordinator Kendal Briles said he felt confident about the players in coach Jon Cooper's unit.

"I think we’ve got good tight ends," he noted. "Kern and Henry, those guys have done a good job. And then Bax is another player that we have that’s done a good job there. I think we have good depth at that position. We’ve got to continue to evaluate the physicality. That’s going to be the whole thing.

"All the walkthroughs you can see where guys fit and make sure they are executing, but really, really it targets once you put on pads and do it in a physical manner. That’s when you are going to be able to see who is going to hold gaps and move people. We’ll see who separates."

An opportunity for separation comes next week. Pittman added that the Razorbacks' second scrimmage, which is expected to be held Sept. 4, will be vitally important for the group.

"That’s a position where we’re still trying to figure out who’s 1-2-3 on the depth chart," Pittman said.