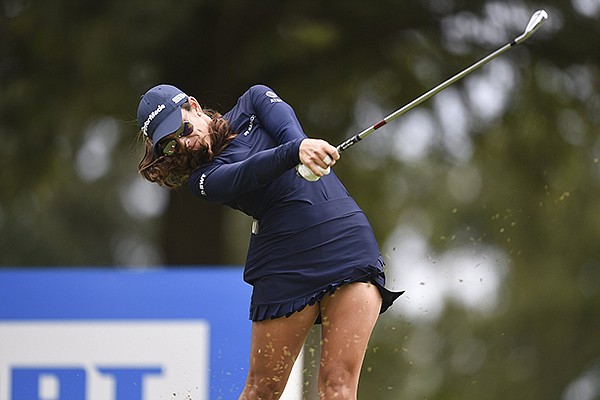 Maria Fassi tees off during the LPGA Northwest Arkansas Championship on Saturday, Aug. 29, 2020, at Pinnacle Country Club in Rogers.

ROGERS — Maria Fassi tapped in a short birdie putt at No. 9 to close out a solid second round at 4 under in the LPGA Northwest Arkansas Championship on Saturday.

Fassi is 8 under heading into today’s final round, eight strokes behind leader Anna Nordqvist. Fellow former University of Arkansas golfer Stacy Lewis is also 8 under after a 3-under 68 on Saturday.

In three previous tournaments at Pinnacle Country Club, Fassi did not make the cut in any. Playing in today’s final round will be a first for the former All-American.

“I’ve always wanted to have a good tournament out here. It just feels like home to me,” Fassi said after her round. “I’m kind of excited that I got that behind me now, and that I’m in good position for tomorrow.”

An almost one-hour weather delay did not stop Fassi’s momentum, and it may have been a benefit thanks to a little protein infusion from her former Arkansas Coach Shauna Taylor.

Taylor gave her former star golfer fresh fruit to keep her energy up, and Fassi promptly reeled off three consecutive birdies at Nos. 3-5 to move to 8 under before she gave a shot back with a bogey at No. 6. Fassi rebounded to close the round with a short tap-in putt for birdie at No. 9.

“We had a little bit of a wait on the third tee, and she gave me some strawberries,” Fassi said, “so now she’s calling them birdieberries. I had three birdies in a row after that, so I guess that’s what’s going to be for breakfast tomorrow.”

This week is Fassi’s fourth event since the LPGA restarted after the coronavirus shutdown. She has missed two cuts, including last week’s British Open. She finished tied for ninth at the Marathon Classic in mid-August.

After going more than five months without playing in an LPGA event, Fassi said the grind of playing in multiple tournaments since the restart has been a challenge.

“My body is not making me pay for it, but I can definitely feel it,” Fassi said. “Just not being as used to it as we were, with the big break that we had. But I’m just trying to stay healthy and being just very cautious with what I do.

“I’m practicing enough for me to be ready, but not overdoing anything. I’m really just trying to protect my lower back, which has been giving me a little bit of issues. But I feel good. If I play good, I don’t really think about my back, so I think that’s the way to go.”

Former Arkansas golfer Gaby Lopez shot an even-par 71 on Saturday to remain at 3 under heading into today’s final round.

The silence was almost deafening at No. 17 on Saturday. Normally the par-3 hole is rowdy and raucous, especially when former Arkansas golfers tee off. Players often toss stuffed animals into the No. 17 grandstand, and Razorbacks often wear a hog head to the delight of the crowd.

When Lewis hit her tee shot close on Saturday, there were no Hog calls, no loud cheers. Under covid-19 protocols, fans are not allowed at this year’s tournament.

“That’s when you think about the fans not being here, on those finishing holes,” said Lewis, who won this event in 2014 and has had multiple top 10 finishes. “And even on 18, people are making eagles like crazy and how much fun that would be for the fans to see.We were talking about how loud it would have been on a Friday afternoon, late in the day and hitting it close would have been pretty sweet.”

Today’s final round will be televised live on The Golf Channel starting at 4 p.m.