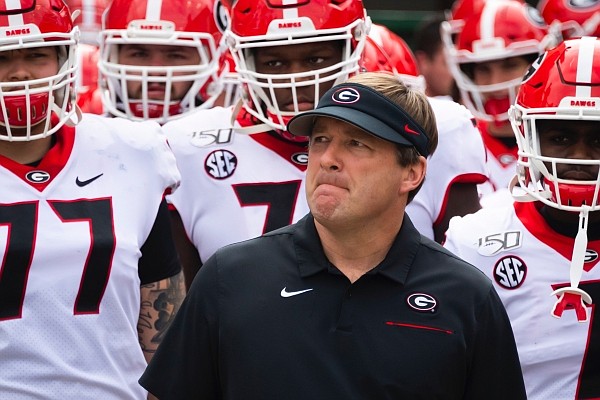 Ninth in a series previewing the 2020 SEC football season.

It didn’t take Kirby Smart long to turn Georgia football into a powerhouse.

The Georgia alum had the Bulldogs hoisting an SEC championship trophy and playing for the College Football Playoff championship in his second year.

In 2020, the Bulldogs are gunning for their fourth consecutive SEC East title, and the opener in this strange, covid-19 impacted season is at Arkansas on Sept. 26.

Smart has never faced a season with more rebuilding to do since his first year in Athens, Ga.

One of Monken’s first tasks will be to determine a quarterback starter between graduate transfer Jamie Newman (formerly of Wake Forest) and sophomore transfer JT Daniels, who was granted immediate eligibility after leaving Southern California.

“We’re behind,” Smart said, listing the coronavirus, social justice issues and injuries as factors in his team’s mindset. “I don’t know that I’ve ever come out of a first scrimmage and felt good.

Smart, one of nine FBS head coaches to be leading his alma mater, said Newman, Daniels, and freshmen D’Wan Mathis and Carson Beck all took snaps with the first offense on Saturday.

Smart said he has not been cleared to go through a whole game with live tackling yet.

“Cleared to me is, I can go out and play a full game of tackle football,” Smart said. “He gets to scrimmage, but he wouldn’t be cleared for a game in terms of contact yet.”

Smart said Zamir White, the likely starting tailback, and James Cook both had long touchdown runs in the scrimmage, but they came against a second-team defense that contributed with mistakes.

George Pickens, a 6-3 target who had 49 catches for 727 yards and 8 touchdowns in 2019, will lead a receiving unit that has already suffered adversity. The Bulldogs lost Dom Blaylock with a torn knee ligament.

The Bulldogs’ offensive front, a powerhouse under Pittman, is almost starting over. The unit lost three players to the NFL Draft, including first-round picks Andrew Thomas and Isaiah Wilson, and 6-6 guard Cade Mays transferred to Tennessee.

“It’s a challenge any time you come in, just building those relationships, because that’s what coaching is. It’s about building relationships,” Luke said. “I guess the Sugar Bowl really helped me, because you have no choice. You kind of get thrown in the fire. And you go in there and you coach and those guys have to develop that trust and belief in you. The only way you can do that is with time.”

Nose man Jordan Davis and end Malik Herring are back on the base 3-4 front, along with linebackers Monty Rice and Azeez Ojulari. The secondary abounds with experience, led by safety Richard LeCounte and cornerback Eric Stokes, but also including senior cover men DJ Daniel and Mark Webb, who will be pushed to retain their starting jobs.

“The biggest thing we’ve emphasized so far this offseason is the finish,” defensive coordinator Dan Lanning said. “You know, we’ve talked about havoc plays on here a lot in the past, and that is still definitely a big focus for us, but we want to get the ball out. We want to finish. We want to impact the game by having some game-changing plays that we can create, and our players have really embraced that so far.”

On special teams, Georgia must find a replacement for Lou Groza Award winning kicker Rodrigo Blankenship, while sophomore punter Jake Camarda, who finished strong in 2019, is a returning starter.

Georgia Bulldogs at a glance

SEC EAST TITLE SCENARIO Identifying a starting quarterback and getting him comfortable in a unit that is rebuilding almost its entire front is the first order of business. The defense should be among the nation’s best, which will make the Bulldogs tough to unseat from their fourth SEC East title in a row.