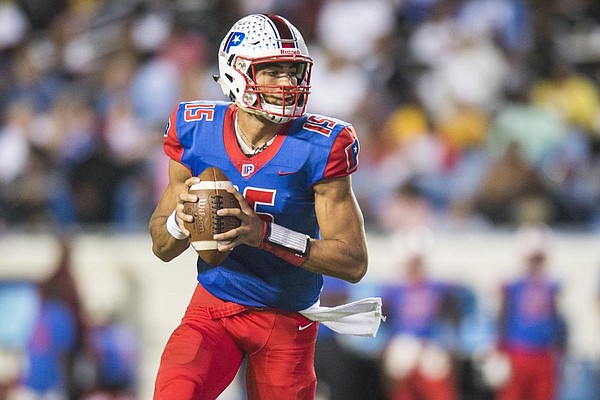 Arkansas Democrat-Gazette/Jeff Gammons - 10/10/19 - Parkviews Landon Rogers (15) looks for an open receiver during the game against the Watson Chapel Wildcats at War Memorial Stadium in Little Rock on Thursday, October 10th 2019. More photos are available at arkansasonline.com/1011parkview/

FAYETTEVILLE — Arkansas 2020 quarterback pledge Landon Rogers of Little Rock Parkview was envious of those who got their high school season underway last week, but he gets his shot in just a few more days.

“Getting to start the season at any point is a blessing because at one point we weren't supposed to have one,” said Rogers, noting fears of covid-19 could shelve the season. “Instead, we had four weeks of practice, a scrimmage and now we are getting ready for a big game.

“It truly is a great moment in time right now.”

Rogers is coming off a junior season in which he was 99 of 182 passing for 1,661 yards and 19 touchdowns against only two interceptions. He also rushed 93 times for 584 yards and 10 more scores for an injury-plagued team that finished 4-7.

He tuned up for this week’s opener by completing 7 of 12 passes for 139 yards and three touchdowns, and rushing for 45 yards and another score more in just two quarters of his team’s scrimmage with Jacksonville last week.

“My stats overall could have been better,” Rogers said. “As a team, we could also have done better. Yes, we are a great team with great athletes, but at the end of the day, we all have things we need to work on.

Rogers is happy to have Outley, who had 48 catches for 721 yards and 8 touchdowns as a junior, as a current and future teammate.

“He is my safety blanket,” Rogers said. “If I am in trouble, the first thing that comes to mind is to find 36. He is a monster.”

Rogers got the opportunity to work with a pair of NFL receivers in former Arkansas star Jarius Wright and former Ohio State wideout KJ Hill this spring and summer.

“As far as sharpening my skills, I worked out more than ever, even in quarantine,” Rogers said. “I got my bag and just went to work. We worked out with some ex-NFL players and current NFL players. It was great to get knowledge from those athletes and to work more like an elite athlete.”

Rogers wants to spread the ball around to his various weapons.

“I intend to be the player on the field that I need to be,” Rogers said. “I am not a guy who is stingy with the ball. If I have an asset that is open, I will get them the ball, whether it is a running back, tight end or wide receiver. My job is to deliver the ball, move the chains and put points on the board.”

Rogers is focused on what head coach Brad Bolding has told him.

“One thing Coach Bolding always says is it's not about how the other team plays, it is about how we play,” Rogers said. “At the end of the day, you are playing for your 10 brothers beside you and you have got to do your job.”

Little Rock Southwest, a first-year school that combined Little Rock McClellan and J.A. Fair, opened its season with a 36-16 loss at West Memphis.

“I have already watched their full game,” Rogers said. “We are expecting to be hitting on all cylinders against a good team.”

Rogers initially committed to Arkansas the same day he got his offer on April 16, but opened things back up on July 4 after feeling like he rushed the decision. He then re-committed to the Razorbacks on July 23.

“Now that my head is on straight, I’m full tilt and all on board,” Rogers said. “I’m ready to do what I need to do.”

He has always loved the Razorbacks and is especially fond of new head coach Sam Pittman and his staff, whose letter-writing campaign impressed him.

“As far as being a target, I am a pretty competitive dude, so good luck,” Rogers said. “I am just going to deal with it as good competition and respect the game.”