State of the Hogs: Todd Butler hard at work after hurricane wrecks hometown 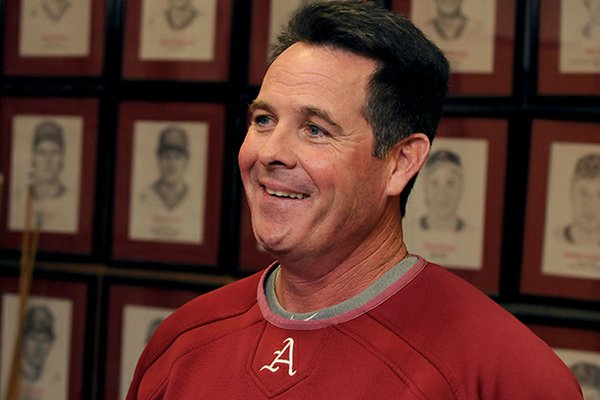 Coaches talk about what it takes to compete on the athletic field in the eye of the storm. They preach messages of toughness.

Todd Butler has learned there is another level of competition: survival.

“I sure have,” Butler said in a phone interview Monday during a break in survival tactics. “This isn’t about toughness. We are just trying to survive in Calcasieu Parish.”

“Lake Charles and Sulphur, sister cities, got the eye of the storm. That means that the winds that hit first were east to west. Then, it switched from west to east. I’ve learned that causes more devastation than if it stays from one direction. If the eye goes over you, it’s going to be both directions.”

Butler served as Dave Van Horn’s top assistant from 2006-13 to help the Hogs to three NCAA super regionals and two appearances in the College World Series. He had three more CWS trips in two stints in similar jobs at Alabama (1995-00, 2004-05).

Butler’s return to McNeese brings his career full circle. He played and coached for the Cowboys. His 1994 team won a school-record 41 games. The Cowboys won the Southland Conference tournament title in 1993 when they made a rare NCAA appearance.

It was time to return to McNeese after a bumpy professional stretch when Butler was fired twice inside of 10 months. He was terminated after six years as head coach at Wichita State. Then, after returning to the SEC as hitting coach and recruiting coordinator at Missouri, cost cuts because of covid-19 left him without a job again.

There were opportunities to stay in coaching — perhaps in pro baseball — but Butler said he thought it was time to return to his roots.

A native of Sulphur, the 54-year-old Butler said he walked into his living room with the news of his Missouri termination with a short statement to wife Melissa and daughters Caitlyn and Kendyll.

“I told my girls it was time to go home,” he said.

At that point, there was no job opening at McNeese. The Butlers moved in with his 73-year-old mother.

“I was fired April 29, and hired here on June 1,” Butler said. “We moved in with my mom and that was a blessing. I’m glad we were here for (Hurricane Laura). The Lord put me back home with my mom to help her through this hurricane. She’s 73 and we lost my dad three years ago (to pancreatic cancer).

“I know now the Lord brought me back for that reason. My faith is strong, but it’s stronger now. I know for sure I’m in the right place. I’m thankful for that.”

Butler has spent his life teaching college baseball players to hit a 90 mph fast ball. He learned you get out of the way at 140 mph.

"Yes, I did," he said. "We evacuated and we are all safe, back home putting things back together and helping neighbors."

Butler is tired, but happy. That came through when TV crews caught up to him for a Saturday interview carried live nationally by NBC's Today Show. He had the same message Monday morning via phone as for the national TV camera.

“I thought I knew how to work, but I didn’t,” he said. “The last four days, it’s been up before dawn and no rest until after dark. I’ve learned how to run a chain saw. The downed trees are unbelievable. I’m completely worn out.

“I’ve found out what a man’s work is like. And, I’ve learned about sewer systems, toilets, electrical systems, generators and gas rationing.

“You wait in line 45 minutes at a gas station to fill up 10 cans for my generator. You can get 50 gallons and the military is there to make sure everyone gets the same amount.

“Mom’s house lost the back patio cover, but the rest is OK. I’ve been cutting up trees that were in driveways for two widows across the street. I’ve about got that done.”

Work to restore power in the area may take another three to four weeks.

“We’ve got a generator,” he said. “A friend showed us how to hook it up to our home. We have power to two air conditioning units and the refrigerator.”

Keeping the refrigerator stocked is a problem.

“The grocery stores are open, but the shelves were wiped clean,” he said. “You kind of expected that.”

Butler said authorities say food is on the way. He’s been impressed by the massive wave of utility workers still arriving.

“You see trucks from all over the country,” he said. “It’s incredible the support we are getting, but we are going to need a lot more. The government is going to have to help us get going again. Our infrastructure is devastated. Our schools are wrecked. Of the elementary, middle and high schools, 97 percent are wrecked. You can't believe it.

“It’s going to take awhile. I’m not sure I was prepared for the devastation. It’s like the widest tornado you can imagine.

“If you have ever seen what a tornado can do, imagine that the swath we’ve got is 60 miles wide and 45 miles long. That’s partly in Louisiana and some in Texas.”

McNeese State isn’t playing sports this fall because of the covid-19 pandemic.

“We couldn’t now anyway,” Butler said. “Covid-19 and the hurricane is a double whammy. Our campus looks like a war zone. We have these giant oak trees all over town and campus. Imagine all those beautiful trees in Fayetteville and all of them are down, just uprooted. I’d say a high percentage of our biggest trees are down.

“Most of the buildings on campus lost roofs. Our football stadium was hit hard. So were the other stadiums. The light standards were snapped in half. We have a new $45 million basketball arena. There are holes on both ends. We lost most of the other facilities for the athletic department.”

His job is vastly different from his days as one of college baseball’s best recruiters. He’s no longer on the road for weeks at a time. Over his 30-year career — including 16 years in the SEC — Butler signed 145 players drafted by pro baseball. He’s always been well liked by players and coaches from coast to coast.

“I found out I have a lot of friends,” Butler said. “My phone has been going for four days. People want to know if I’m OK. It’s been texts and calls. I lay in bed at night and reply.”

The phone calls peaked after his appearance on national TV., but there is no way to hear a phone while running a chainsaw. That’s what he did all day Saturday.

“I’ve been very fortunate in 30 years of coaching to meet and work with a lot of great people and coach great people,” he said. “The messages have been fantastic. I’ve found out there are a lot of people who love me. I love them, too.

“But I’ve learned my message in coaching was all wrong. I thought the whole idea was to talk about toughness. I thought that’s what you focused on. These last four days, it wasn’t about being tough. No, it was just trying to figure out how to survive. It’s a stronger message than just ‘stay tough.’ Our people in southwest Louisiana are survivors."

Most evacuated and then returned to see homes leveled or badly damaged. Butler wanted to stay behind after sending family to safety.

“We told my mom to leave with (daughters) Caitlyn and Kendyll when the winds were at 75 mph,” he said. “Melissa and I were going to ride it out. Then, it came ashore 30 miles away and jumped to 150 mph. I told Melissa she had 30 minutes to pack. We left.”

And, they prayed. The Butlers have always been faith-based. His faith increased after surveying the damage at his new home site, although the time line for the build out is now pushed back. Construction crews have more pressing duties.

“We purchased a beautiful wooded lot,” he said. “The construction foreman had asked me to pick out some trees where we wanted the slab. There were eight huge oaks. Three had to go.

“So last week I pointed to the three that we wanted his crew to take out. They were marked just before the hurricane arrived.”

With the storm approaching Wednesday, Butler decided for some divine intervention.

“The day before the winds picked up we’d been to the lot to decide on which trees,” he said. “I just decided to pray about those trees. I said, ‘Lord, if this is where I’m supposed to be, take down those three trees.’

“We’d rolled back in town Friday and went back to the lot. You’d never seen such devastation. It was difficult to just get down the street because of the downed power lines and trees. We arrived at the lot and what I saw was a total shock. Those three trees were uprooted and gone!

“I’d wondered about leaving baseball, but thought this is where the Lord wanted me. I had it affirmed. My prayers have been answered. The Lord sent me home and I’m blessed.

“I’ve been in some great places. We loved Fayetteville. It’s one of my all-time favorite places. But I’m home.”

The pay isn’t the same as in SEC baseball.

“It’s hard for some to understand this,” Butler said, “but you can make less money and be happier. That’s where I am right now. I got to go home again.”