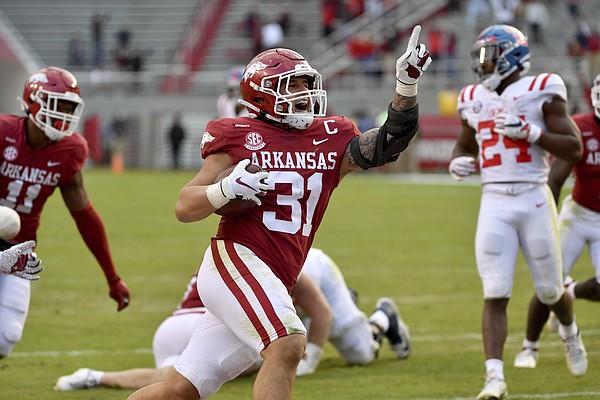 Arkansas defensive back Grant Morgan (31) celebrates as he returns an interception for a touchdown against Mississippi during the second half of an NCAA college football game Saturday, Oct. 17, 2020, in Fayetteville, Ark. (AP Photo/Michael Woods)

Morgan, a redshirt senior from Greenwood, was named one of 16 semifinalists for the Butkus Award, which has been given to the nation’s top linebacker since 1985 by the Butkus Award Foundation.

He is the only player in the country with 100-plus tackles, as his 104 stops and 13.0 tackles per game lead the nation. The 5-11, 222-pounder also has 6.5 tackles for loss, 2 sacks, 5 pass breakups, 2 quarterback hurries and 1 interception, which he returned 23 yards for a game-sealing touchdown against Ole Miss.

He also has four games with 15-plus tackles, including 19 against Ole Miss and LSU. He is the first SEC player to have two 19-tackle games in a season since LSU’s Kevin Minter (2012).

Morgan is one of eight SEC players who make up half of the Butkus Award semifinalists. The others are Alabama’s Christian Harris, Georgia’s Nakobe Dean and Monty Rice, LSU’s Jabril Cox, Missouri’s Nick Bolton, South Carolina’s Ernest Jones and Texas A&M’s Buddy Johnson.

Finalists for the Butkus Award are scheduled to be announced Dec. 7, and the winner on or before Dec. 22.

The Biletnikoff Award, administered by the Tallahassee (Fla.) Quarterback Club, has been given annually since 1994 to the nation’s most outstanding receiver, regardless of position. Treylon Burks was added to the award's watch list Monday.

Burks leads the Razorbacks with 39 catches for 598 yards and 6 touchdowns. He tied Boo Williams at becoming the fastest Razorbacks to reach 1,000 receiving yards, when he surpassed the milestone against LSU on Nov. 21, in his 18th game.

Burks is fifth in the SEC in receiving yards per game (85.4) and ninth with 5.6 catches per game. He is one of three FBS receivers with five games of 90-plus receiving yards.

“Obviously both of them have had good seasons to get on those lists,” Arkansas Coach Sam Pittman said. “The other thing about that is winning a little bit helps you get recognition to get on those lists, so every individual award, in my opinion, comes with a strong background of team involved with it, too.”

Because the normal bowl eligibility requirements have been waived, the Razorbacks could receive a postseason invitation even if they finish 3-7.

Unmentioned by Pittman: The officiating error at the end of the Auburn game which would have given the Razorbacks a 28-27 win on the Plains and a 4-4 record with two to play.

Coach Sam Pittman said the Arkansas roster would be close to full go for Saturday’s rescheduled game at Missouri after covid-19 testing and tracing combined with injuries dropped the Razorbacks below the threshold of 53 available scholarship players last week.

Offensive linemen Noah Gatlin and Beaux Limmer, who have combined for nine starts this season, are questionable in their rehabilitation from injuries. The redshirt freshman Limmer, who has four starts at right guard, missed the last three games. Gatlin, who has five starts, has been dealing with a concussion.

“I think Beaux’s doing well,” Pittman said. “We’ve still yet to find out on Noah. He’s getting some tests right now and we’ll see if he’ll be available or not. But we feel pretty good on Beaux.”

Coach Sam Pittman was asked on his Monday video conference whether he was concerned about the fitness of the players who missed most of the last two weeks due to covid-19 testing and quarantining.

“Not really,” he said. “You know quarantine now is a little bit different than what it was before, in that they can get some individualized workouts. Before, they weren’t able to do that and now they can.

“To be honest with you, we’ve been dealing with it all year … so just a few more now, obviously. But I think we’ll be OK. We’re going to do business as usual this week. If I feel like at the end of practice we haven’t had a spirited practice or that we need a little bit more conditioning, we’ll get that in early in the week.

The 11 a.m. kickoff time Saturday should give the Battle Line Rivalry a good shot at staying above the freezing mark throughout the contest if the five-day forecast is accurate.

The current projection for Saturday calls for a high of 48 degrees and a sunny day after an overnight low of 28 in Columbia, Mo. There’s a 10% chance of rain, and the wind is expected to be about 9 mph out of the west.

The Razorbacks will face a quarterback on a roll Saturday. Missouri redshirt freshman Connor Bazelak was named SEC freshman of the week for his performance in the Tigers’ 41-0 win over Vanderbilt on Saturday.

In his six starts, Bazelak is 134 for 183 (73.2%) for 1,416 yards with 5 touchdowns and 1 interception. Bazelak’s first start came in last year’s season finale, a 24-14 win over Arkansas in Little Rock. Bazelak went out in the first half with a torn knee ligament that required surgery.