Stretching the floor: Hogs give Smith go-ahead from 3 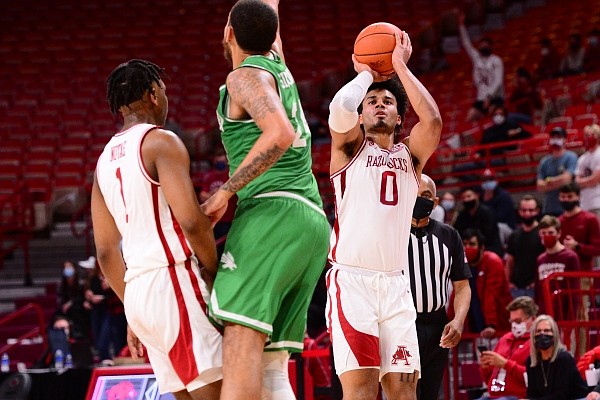 Arkansas forward Justin Smith attempts a 3-pointer during a game against North Texas on Nov. 28, 2020, in Bud Walton Arena in Fayetteville.

FAYETTEVILLE — Justin Smith isn’t going to replace Isaiah Joe when it comes to high volume three-point shooting for the University of Arkansas basketball team, but the 6-7 senior graduate transfer from Indiana hopes to get more perimeter baskets than he did for the Hoosiers.

Joe, a second-round pick by the Philadelphia 76ers in the NBA Draft, hit 207 of 548 three-pointers in two seasons at Arkansas.

By comparison, Smith hitting 2 of 3 three-pointers in the Razorbacks’ 69-54 victory over North Texas on Saturday is pretty modest. But it was only the fourth time in 100 college games that Smith has hit as many as two three-point baskets.

Smith did it once in each of his three seasons at Indiana when he was 2 of 2 against Minnesota as a freshman, 3 of 6 against Michigan State as a sophomore and 2 of 2 against Troy as a junior.

For Smith to get two three-pointers in his second game as a Razorback speaks to the work he put in during the offseason to improve as a shooter.

“I just really wanted to go out there and let the game come to me,” said Smith, who had a game-high 18 points against North Texas. “I wasn’t really trying to force anything.

“But I’ve been working on those threes, so I had to shoot them. Because there’s no point in working on something if you’re not going to use it in a game.”

Smith didn’t attempt a three-pointer in Arkansas’ 142-62 season-opening victory over Mississippi Valley State, but he also was 3 of 3 on three-pointers in the Red-White intrasquad game.

Without any exhibition games this season, that makes Smith 5 of 6 from beyond the arc the three times Arkansas has played in Walton Arena with fans in the stands.

“When I got here, that’s one of the things I knew I needed to work on and the coaching staff worked with me,” Smith said after the Red-White game. “We put a lot of work in this summer into fall and it’s good to see it paying off.

“I’ve got to do it a little more consistently, for sure.”

Razorbacks Coach Eric Musselman said that after Smith went into the transfer portal, Arkansas’ coaching staff stressed to him that he needed to work to improve his three-point shooting.

“We wanted him to have the freedom — at least in his mind — if he was wide open to take those shots,” Musselman said. “Which he’s done.”

Musselman said Smith is good enough athletically to get open three-pointers in transition, but the Razorbacks also run set plays for him.

“He’s the guy who [with] certain plays becomes really comfortable,” Musselman said. “And we can go to him and certainly the more three-balls he attempts and the more three-balls that he makes, it really, really opens up the floor for not only us as a team but for him individually.”

Adrio Bailey is an example of how a forward can improve his three-point shooting with a season of playing for Musselman.

The 6-6 Bailey hit 15 of 39 three-pointers as a senior for the Razorbacks last season after being 2 of 12 as a junior, and not attempting any during his freshman and sophomore seasons.

“Adrio made enough threes to keep the defense honest last year,” Musselman said. “It was because we encouraged him to shoot the three. We gave him the freedom when he thought he was open and could make a shot.”

Musselman wants Smith to take the same approach as part of his all-around game on offense.

“Some nights he’s going to hit the three,” Musselman said. “Other nights he might have seven or eight assists.”

“Justin is our most versatile guy,” junior guard JD Notae said. “He can guard the 1 through 5. He’s super athletic. He’s been working on his three-ball each and every day. Getting in the gym, getting up threes and just working his offensive game.

Musselman said Smith did a great job of converting perimeter shots against North Texas when he had open looks.

“He was selective in his three-point shots,” Musselman said. “He shot the ball when his feet were set.”