'Time to step up': Smith ready for lead role at tailback 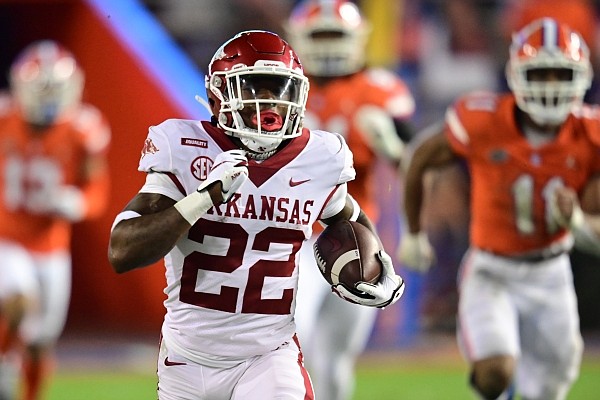 Arkansas running back Trelon Smith runs for an 83-yard touchdown during a game against Florida on Nov. 14, 2020, in Gainesville, Fla.

FAYETTEVILLE — Trelon Smith’s approach all season for Arkansas has been simple: Stay prepared so you don’t have to get prepared.

That mindset, now more than at any point this fall, will benefit the Razorbacks’ offense this week. The shifty 5-9 running back is expected to lead his position group in the final weeks of the season following Rakeem Boyd’s announcement Tuesday that he is opting out of the remainder of 2020 and preparing for the upcoming NFL draft.

Boyd and Smith, both natives of Houston, developed a close bond soon after Smith arrived at Arkansas from Arizona State ahead of the 2019 season. Smith understands Boyd’s decision. He did what was best for himself.

But all eyes are now on Smith, and it is his time to shine.

Creating his own path: Trelon Smith making most of his shot at Arkansas

“Me, personally, when I heard it, it was simple,” Smith said Tuesday during a Zoom conference with reporters. “I just told myself, ‘It’s time to step up to the plate.’ I’ve been preparing for this moment for the longest.

“I’ll be ready, most definitely.”

Smith leads the Razorbacks with 469 rushing yards and is second on the team with two touchdown runs, which he scored in his last two games. He finished with a career-high 118 yards and an 83-yard score in the loss to Florida on Nov. 14.

On seven fewer carries (82), Boyd, who did not play in losses to Auburn and LSU, totaled 309 yards and three touchdowns this season.

Smith filled in admirably for an injured Boyd at Auburn, racking up 159 yards of offense — 81 rushing, 78 receiving. Smith was not as effective in the Razorbacks’ home loss to LSU (47 total yards), but he did find the end zone on a 1-yard run.

He is confident not only in his ability as a runner but the rapport he has developed with quarterback Feleipe Franks throughout the season.

“I feel like when it’s time for me and Feleipe to step out there on the field this coming Saturday, we’ll be clicking on all levels,” said Smith, who caught two passes on six targets against LSU. “We do a good job of communicating in the backfield. I feel like it should be smooth.

“It should be a smooth game for me and Feleipe.”

Even with Boyd in the equation, Smith showed to be an effective back and playmaker. Smith has averaged 3.28 yards per carry before contact and broken 23 tackles, nine more than Boyd, according to SECStatCat, a website dedicated to SEC football analytics.

He is averaging 7.03 yards per touch on carries left of center and has tallied four explosive plays when bouncing runs off left tackle. In the passing game, he has brought in 20 of 29 targets.

"He's a great player. He's shown it all year,” Franks said Tuesday. “He's shown he can come in and step up and do what he has to do and not complain. His production backs that up. He's a good player. I'm excited always just to watch him go out there and compete.

“He's a competitor, and I love playing around guys that love to compete. Same with Rakeem. But, Trelon's always ready to step in and play that role, and he's done an excellent job so far this year."

While his numbers in a shared role have been solid, Smith is most proud of his growth in an area of the game that may go unnoticed to some.

“Pass blocking,” he said. “My pass protection (has improved). I'm picking up on blitzes, picking up on cornerback blitzes. I’m just noticing where it’s coming from.”

Like his always-ready attitude, his pass protection will come in handy at Missouri on Saturday. Missouri is tied for eighth in the SEC in sacks with 14, but sophomore defensive lineman Trajan Jeffcoat has four — two off the league lead.

Linebackers Tre Williams and Nick Bolton each have two sacks as well.

“I feel like coming into this next game we’ll do a better job of adjusting and just (being more physical than) these guys,” Smith said. “I feel like we weren’t as physical as LSU was and that (was) a major role in it. We’ve just got to out-physical these guys this coming weekend.”