Boyd opts out: UA down to 3 scholarship backs 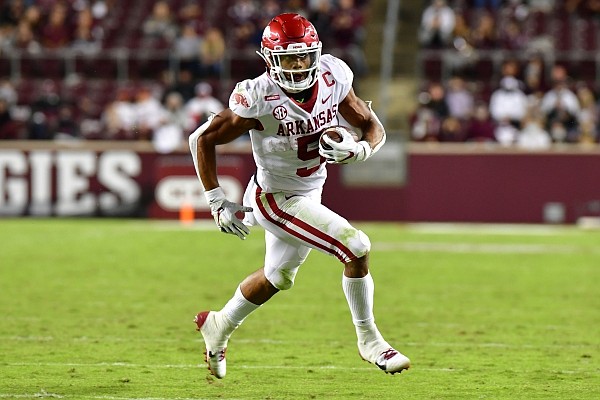 FAYETTEVILLE — University of Arkansas tailback Rakeem Boyd announced Tuesday he has opted out of the final two games of the season.

Multiple sources told the Arkansas Democrat-Gazette that Boyd, who has been sidelined twice this season, cleared out his locker and did not participate in Monday’s practice.

“I will be preparing for the 2021 NFL Draft,” Boyd wrote on his Twitter account. “I want to thank both staffs previous and present for [their] knowledge and guidance in my football life and in my personal life. I want to thank my teammates for being in the trenches with me.

“I want to give a special thanks to the Razorback fans. You have made the last three years the best of my life.”

Boyd, an 1,133-yard rusher in 2019, has not had a big follow-up senior season. Voted by teammates as an offensive captain along with quarterback Feleipe Franks, he ranks second on the team with 309 rushing yards on 82 carries, and leads the team with 3 rushing touchdowns.

The 6-foot, 206-pounder missed the Razorbacks’ last game, a 27-24 loss to LSU on Nov. 21, after being caught up in a outbreak of covid-19 testing and tracing along with many of his teammates. The Razorbacks’ low roster numbers caused a postponement of last week’s road game at Missouri, which has been rescheduled for Saturday.

Boyd, who made six starts at tailback, also suffered an ankle injury in the first half of a 21-14 victory at Mississippi State that caused him to miss the road game at Auburn the following week.

Junior Trelon Smith has held the team rushing lead throughout the season. He has 469 rushing yards on 89 carries and 2 touchdowns. Smith averages 5.3 yards per carry, while Boyd is at 3.8 ypc.

Boyd leaves the Razorbacks in a pinch at running back, which has suffered with injuries and attrition since the start of preseason practice.

Smith, T.J. Hammonds — who had been with the receivers through the first half of the season — and true freshman Dominique Johnson are the lone healthy scholarship tailbacks. When Boyd and Johnson missed the LSU game Nov. 21, walk-on Donte Buckner was the third-team tailback.

Boyd told the Democrat-Gazette during the summer he returned this season to help the Razorbacks win more games in the SEC and improve his draft stock.

Prior to the season opener against Georgia, Boyd said opting out this season wasn’t in his thoughts.

“I can’t do that to my team,” Boyd said Sept. 22. “I owe so much to my team. I feel like this is my team. I came back to establish something, so opting out wasn’t even in the talk.”

Coach Sam Pittman, who had no media access Tuesday, was asked about Boyd’s subpar season Monday.

“There’s still three games left, you know,” Pittman said. “So he can certainly improve his numbers in the next three games if he goes out and plays well and they block well for him.

“We talk to him and all the other guys quite often. He knows that he can do something about that, as well, himself. We can certainly block better and do some things of that nature. But, sometimes as a back you have to go make your own way. He was getting better at that.”

Pittman pointed out Boyd’s strong game at Texas A&M, when he had 18 carries for 100 yards, his ninth 100-yard game as a Razorback. He also scored a touchdown.

Since then, Boyd had rushed for 65 yards in a win over Tennessee and 56 yards with a touchdown run in a loss at Florida. He averaged 4.5 ypc (49 carries for 221 yards) in his final three games after managing just 2.7 ypc (33 for 88) in his first three games.

Boyd became the fifth opt out for the Razorbacks. Receiver Shamar Nash, cornerback Jarques McClellion and offensive lineman Chibueze Nwanna made the decision prior to the season, and cornerback Jerry Jacobs opted out after four games.