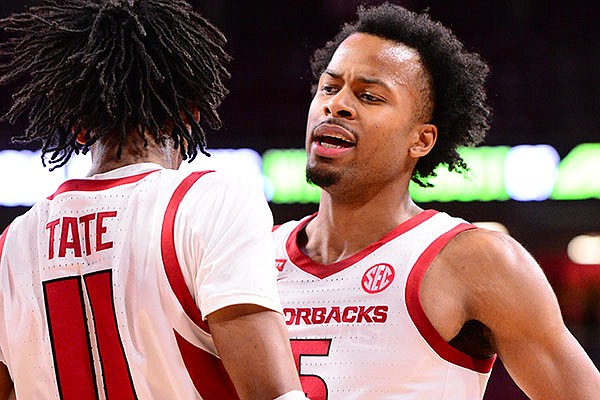 Arkansas' Moses Moody (5) celebrates with teammate Jalen Tate (11) during a game against Texas-Arlington on Wednesday, Dec. 2, 2020, in Fayetteville.

Moody, a 6-foot-6 freshman from Little Rock, Arkansas, was 7-of-12 shooting and made two of the Razorbacks' seven 3-pointers.

Connor Vanover and Jalen Tate added 12 points apiece for Arkansas (3-0), which has won all three games by double digits but shot just 39% (24 of 61) from the floor against the Mavericks. Justin Smith had 11 points and nine rebounds.

Smith scored on a dunk and Moody followed with five straight points and the Razorbacks built a 20-point lead midway through the second half.

Tate made 3-pointer to stretch the Arkansas lead 69-51 with about seven minutes left, but the Razorbacks didn't make another field goal until Tate's jumper with 39 seconds to play.

Moses Moody scored a game-high 24 points and the Razorbacks notched their third win of the season. He shot 7 of 12 from the floor and was 8 of 10 at the foul line.

Jalen Tate was really solid as well, adding 14 points, six rebounds and four assists against one turnover. Connor Vanover chipped in 12 points in 12 minutes and Justin Smith finished with 11 points and nine rebounds.

The Mavericks were led by 17 points from Shahada Wells, but turned the ball over 14 times and shot 38.9% from the floor in the loss.

Arkansas returns to Bud Walton Arena on Saturday for a 5 p.m. tip against Lipscomb.

We will have more from tonight's game a little bit later on WholeHogSports.com.

A Jalen Tate 3 is the Razorbacks' only bucket since the 10:01 mark, but they have been very solid on the defensive end minus some cheap fouls.

Tate became the fourth Arkansas player in double figures following his triple. He has 12 points to go with five rebounds and four assists against one turnover. Justin Smith is one rebound shy of a double-double with 10 points and nine boards.

Can't say enough about how well Moses Moody has played tonight, pushing a pair of fairly inefficient scoring games to open the season behind him. He has a game-high 23 points on 7 of 8 from the floor and 7 of 8 at the line.

Moody knocked down all three free throws coming out of the last break, then he got maybe his easiest bucket of the night on a backdoor feed from Vance Jackson.

The Razorbacks' run extended to 13-0 before a Mavericks jumper snapped it. Arkansas has led by as many as 21 tonight, but UTA has added a couple of tough 3s to trim the lead a bit as we hit the under-12 timeout.

Three Razorbacks - Justin Smith, Moses Moody, Connor Vanover - are in double figures, and Moody leads all scorers with 18. He has been so, so good tonight, but he just took his first bad shot of the night - an acrobatic layup after spinning off a defender. He will be at the line for three shots when play resumes.

Arkansas is 7 of 12 from the floor in the second half, and Desi Sills has assisted on two of those scores.

Moses Moody is having a terrific night. He is up to 16 points and has added four points in an 8-0 run to open the second half.

Connor Vanover, who has 12 points, added a jumper and a dunk and a pair of blocks, and Jalen Tate hit a tough midrange jumper. Chris Ogden called for time to slow the Razorbacks' run. The Mavericks then could not get a shot off on their next possession.

Desi Sills has a pair of steals in the opening minutes of the second half. He has not had a great offensive night, but he is up to four steals, tying a career high.

Update: Moses Moody leads Arkansas with 12 points on 4 of 4 from the floor. Also has 4 boards. Connor Vanover added 8 points and Justin Smith has 7 + 5. Jalen Tate (+13) finished the half with 7 points + 4 assists.

Moody turned in his best half as a Razorback. He hit a pair of 3s - one from the corner, one from the right wing - and finished strong at the rim a couple of times. You knew he was going to break out of an early shooting funk soon, and he's done that it seems.

Tate had a decent half, too, adding seven points and four assists. Smith grabbed five rebounds and scored five points as well. It was good to see KK Robinson come in late in the half and lend a hand defensively and knock down a corner 3. His stroke is so smooth.

Arkansas outrebounded UTA 23-15 in the first half and shot 6 of 14 from deep. If the Razorbacks' shot selection improves in the second half and their defensive intensity picks up a bit, this should be a comfortable win. But Chris Ogden's group isn't going to lay down.

Justin Smith caught a pass at the right elbow with his defender daring him to go left. He did and missed a shot near the restricted, but Jalen Tate was there for a backside rebound and putback plus the foul. Tate will be at the line when play resumes.

UTA is shooting 45.8 percent from the floor but it seems like the Mavericks have been much better than that. Their guards have hit some tough jumpers, which has frustrated Eric Musselman on the sideline.

The Razorbacks began to build steam offensively and opened up an 11-point lead before former Arkansas forward Jordan Phillips buried a corner 3.

JD Notae and Connor Vanover have each hit 3s in the last few minutes. They both have five points tonight, and Jalen Tate has all four of Arkansas' assists to this point.

Moses Moody has seven points and is set to check back in, and Justin Smith has six.

The Razorbacks hold a three-point lead, but Eric Musselman is not happy with his group's shot selection and sloppiness with the basketball. Five different players already have a turnover, and the Mavericks have turned those into four points.

Fredelin De La Cruz has the last four points for UTA after Arkansas pushed its lead to seven. He has six points so far to lead the Mavericks.

Arkansas is 8 of 14 from the floor but 1 of 4 from 3. The Razorbacks will resume play with one second to get a shot off.

The Mavericks have taken advantage a bit of Connor Vanover's mobility and scored a few times around the rim. UTA also buried a 3 prior to the media timeout. Mavericks are 4 of their first 5 from the floor.

For Arkansas, Vanover has a bucket off an offensive rebound following a Desi Sills missed 3 from the left wing. Moses Moody also atoned for his early travel and dunked on a UTA player on a baseline out of bounds play. Good to see him finish strong at the rim.

Justin Smith has four points for the Razorbacks. Both of his scores have come at the rim.

The Mavericks were forced to call for time after it could not inbound the ball following a Moses Moody traveling violation.

Arkansas got on the board first thanks to a Justin Smith layup. Razorbacks opened the game again with a play designed for him and he converted.

This group played 18 offensive possessions together in Saturday’s win over North Texas and 17 defensive possessions. Defensively, it was dominant, allowing .24 points per possession. The Mean Green turned the ball over seven times, shot 22.2% inside the arc and did not make a 3-pointer.

Sills leads the Razorbacks in scoring at 16.5 points per game on 70.6% shooting, and Smith is second at 15.5. Vanover has added 14.5 points on 73.3% from the floor to go with nine blocked shots. Through two games, Arkansas’ average offensive possession has lasted 14.5 seconds, which ranks 20th nationally, according to KenPom analytics.

The Razorbacks finished 39 of 58 shots at the rim in their first two games, leaving Eric Musselman frustrated earlier in the week. Converting close-in looks and taking care of the ball (16 turnovers vs. UNT) are two keys to tonight’s game.

The Mavericks opened the season with a 75-68 home loss to Oklahoma State then lost at Louisiana Tech, 76-71. Their first win came Saturday against Northwestern State. UT-Arlington placed five players in double figures and six wound up with nine-plus points. Wells led the way with 15 points on 6 of 15 shooting.

In their three games, the Mavericks have valued the basketball, turning the ball over on 11.5% of possessions, which ranks fifth nationally, per KenPom. And defensively, they are turning opponents over on one-fifth of their possessions.

Wells, Azore and Sam Griffin, a 6-3 guard, appear to be UTA’s top scoring threats. Each player has hit at least four 3s and hold a usage rate above 24 percent, according to KenPom. Azore also grabbed 12 rebounds in the loss at Louisiana Tech.