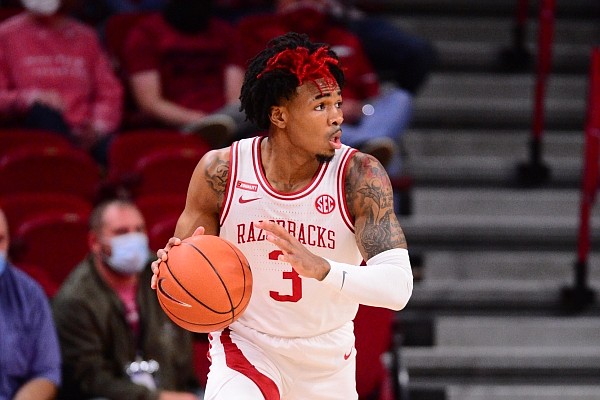 Arkansas guard Desi Sills looks to make a play during a game against North Texas on Nov. 28, 2020, in Bud Walton Arena in Fayetteville.

FAYETTEVILLE — Texas-Arlington gave itself a chance to upset Oklahoma State and freshman guard Cade Cunningham — a preseason first-team All-American and projected NBA lottery draft pick — in the season opener last week because of how the Mavericks forced turnovers.

UTA had 12 steals and outscored Oklahoma State 29-2 in points off turnovers.

“When you turn over somebody like we did against Oklahoma State, you plan to win the game,” Mavericks Coach Chris Ogden said. “But unfortunately, we couldn’t make a shot that game, and we gave up some timely rebounds.”

But UTA keeps taking the ball away.

“We haven’t been pressing,” Ogden said. “We just try to emphasize on-ball defense and active hands.”

UTA’s ability to force turnovers is worrisome for Arkansas Coach Eric Musselman after the Razorbacks had 16 turnovers in a 69-54 victory over North Texas on Saturday.

“They rely on changing defenses to try to create steals,” Musselman said. “So we’re going to have to be alert.

Arkansas had as many as 16 turnovers in only six of 32 games last season, but it happened in four of the first 11 games. The Razorbacks’ 21 turnovers in a 91-43 victory in last season’s opener against Rice turned out to be their season high.

“Early in the year last year, we didn’t take care of the ball like I had hoped,” Musselman said. “We’ll get better at it, because we’ll keep talking about it. Certainly against UTA, taking care of the ball is important to us.”

Shahada Wells, a transfer from Tyler (Texas) Junior College, is leading the Mavericks on offense and defense. The 6-0 junior is averaging 18.0 points and has 10 steals. He scored 21 points against Oklahoma State.

“He creates a lot of problems,” Ogden said. “He can score at three levels. He’s got a high, high basketball IQ and some long arms. He’s been a very good addition for us.”

“I’ve got three guards that have a midrange game,” Ogden said. “That’s very rare in basketball these days. All three of them get their points in a variety of ways from creating for themselves to coming off screens, to a couple of spot-ups here and there.”

“Their point guard does a great job getting into the teeth of the defense, and then their two wings can really, really score the ball,” Musselman said. “All three guards do a great job rebounding. The guards all can draw free throws attempted.

The eight Razorbacks who have played in both games this season are junior guard Desi Sills, a returnee from last year, and seven newcomers in senior graduate transfers Justin Smith, Jalen Tate and Vance Jackson; redshirt transfers Connor Vanover and JD Notae; and freshmen Moses Moody and Khalen Robinson.

“Arkansas is a really, really good team,” Ogden said. “Eric does such a good job. He plays his best players a lot of minutes. He gets them shots.

“They look like a team that’s connected. They know what they’re trying to get, which is paint touches and kick-out threes and fouls.”

Ogden said the Razorbacks don’t look like a team with players who weren’t together until this season.

“I think they look like an Eric Musselman-coached basketball team,” Ogden said. “In my opinion, they’re simple in what they do, but they’re well coached. They look like a well-oiled machine to me.”

Ogden said he hopes the Mavericks can win the turnover battle again.

“We’re going to do what we do and play how we play,” he said. “So it’d be nice if we could turn them over, there’s no question about it.”