Malvern freshman O-lineman one to watch 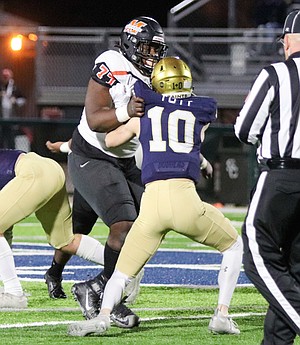 Malvern freshman offensive lineman Vinnie Winters has the attention of two Power 5 programs, and the number will grow.

Leopards coach J.D. Plumlee wanted to move Winters up to varsity at the beginning of the season, but Winters requested to remain with the junior high squad that eventually won the 7-4A conference title.

“In junior high, he was never challenged,” Plumlee said. “It was man amongst boys.”

Winters, 6-4, 288 pounds, is already on Arkansas and Kansas’ radars. Because the varsity roster was depleted because of covid-19 issues, Plumlee moved him up during Week 7.

“We moved him up and he got to play against Arkadelphia, Nashville and Trumann and Shiloh Christian obviously Friday night,” Winters said. “He held his own.”

“I’ll be sending out his highlight film this week,” Plumlee said. “The future is whatever he wants it to be.”

Winters also plays basketball and is competing for the junior high team but could be moved to the varsity level later.

“He’s just going to physically dominate people,” Plumlee said. “He gets up the floor well. Last year he started as an eighth grader and he’ll bring the ball down the floor. It all starts with his feet. He hasn’t gone through puberty all the way yet. He’s got great hips.”

Plumlee expects Winters to be 300-plus pounds as a sophomore after going through the offseason.

“In August around fall camp he needs to be sitting around 305-310 and carrying it well,” Plumlee said.

Winters, who is 14 years old, has a good work ethic and football IQ.

“He’s a kid that will come in three days a week during basketball season and lift with us in the mornings,” Plumlee said. “He’s one of those type of high-character kids. Grades won’t be an issue with him.”

Malvern also has promising sophomore quarterback Cedric Simmons, who has an offer from Kansas.

“We’ll probably have a lot of foot traffic over the next 3-4 years at Malvern for sure,” Plumlee said.