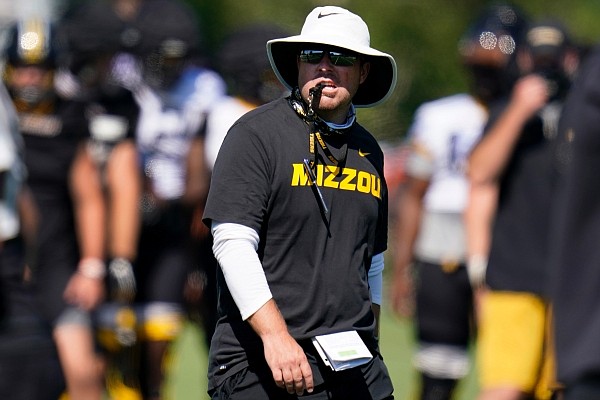 Yet the pair are forging a bond as their teams prepare to meet for the first time in the Battle Line Rivalry game on Saturday in Columbia, Mo.

Pittman, the first-year University of Arkansas head coach who has a background in the high school ranks in Missouri, turned 59 Saturday.

Drinkwitz, the Alma native who got his start on the Arkansas prep scene, is one of the youngest coaches in the FBS at 37.

When coronavirus issues and injuries at Arkansas led the SEC on Nov. 23 to postpone the Battle Line game, Drinkwitz thought he’d give Pittman a little poke. He sent Pittman a text at 11:45 p.m. that night saying he had better be awake since Drinkwitz and the Tigers were having to stay up late to install a new game plan for Vanderbilt.

“He just wanted to make sure that I was up since he had to be, and I thought it was funny,” Pittman said Monday. “But I have a lot of respect for him. I didn’t know him until obviously this year, and being head coaches we get a chance to talk to a lot of head coaches during the season, and he’s one that I’ve certainly taken a liking to and a friendship with.”

Drinkwitz was asked Tuesday about his growing friendship with Pittman.

“When you’re new into this league, you kind of try to figure out who … you might be able to talk to, and Coach Pittman and I have been able to share a couple of texts and whatnot throughout the year,” Drinkwitz said. “And he seems like the type of guy who can handle a joke. So that’s what I thought I’d do since they were taking a week off getting healthy. You know it was fun.

"I wish him all the success in the world except Saturday at 11.”

Arkansas tailback Trelon Smith, who already has started two games in Rakeem Boyd’s absence, said he’s ready for whatever comes now that Boyd has elected to opt out for the last two games of the regular season.

“I felt he made the best decision for himself,” Smith said. “But me personally, when I heard, it was simple. I just told myself, ‘It’s time to step up to the plate.’ I’ve been preparing for this moment for the longest, and I’ll be ready most definitely.”

“That’s kind of his decision,” Franks said. “And … I think we have guys on the team who are leaders as well. Even when it was just four getting voted captains, that’s not the only leaders that we have on the team by no means. That’s a continual thing throughout the season that more and more leaders emerge.”

“Coach Drinkwitz is a good guy, too. I met him a couple times growing up when he was at A-State and when he would come and recruit. I remember when he’d come and meet with Coach Jones. So they’re great guys.

“I look forward to talking to them after the game. Hopefully, I’ll be the one smiling.”

The return of former Missouri linebacker and head football coach Barry Odom to campus this weekend as the defensive coordinator for Arkansas is among the top storylines for the Battle Line Rivalry.

Missouri Coach Eli Drinkwitz said the Tigers will be certain to “take all precautions” in terms of signals and to assure “we’re not compromised with anything we’re doing on the defensive side of the ball” because of Odom and others on the Arkansas staff who were with the Tigers last year.

“I love him,” Manuel said. “He gave me a shot. The best way to respect him is to prepare for the Razorbacks like I’m playing the Super Bowl.”

Now he can tell himself to do it from the comfort of his own office whenever he wants. That is if he can get his new jukebox plugged in and operational.

Pittman posted a picture of a jukebox Tuesday morning with a caption thanking his agent and her firm: “Have to get this thing turned on!! Thank you to Judy Henry and Wright, Lindsey, Jennings.”

Coach Sam Pittman’s weekly radio show “Sam Pittman Live” will not take place this week due to a scheduling conflict. The Razorback men’s basketball team is scheduled to host Texas-Arlington at 8 p.m. on Wednesday.

The final regular-season show is scheduled for next Wednesday at the Catfish Hole restaurant in Fayetteville.

Missouri Coach Eli Drinkwitz talked about being part of the early stages of the rivalry game with Arkansas, which got its annual pairing and Thanksgiving weekend status in 2014.

But his thoughts on rivalries wound back around to an earlier time.

“That’s what college football is all about,” said Drinkwitz, referencing big rivalry games. “I mean, you ask me the biggest game I’ve ever coached in, I’m going to tell you Alma-Greenwood all day long, you know. Twelve thousand people, I mean it was something serious growing up and playing and coaching in that.”