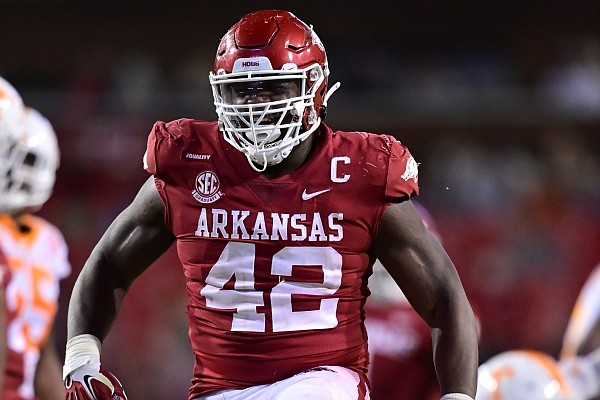 Arkansas defensive tackle Jonathan Marshall celebrates after making a tackle during a game against Tennessee on Nov. 7, 2020 in Fayetteville.

FAYETTEVILLE — The legend of big Jonathan Marshall has continued to grow during his career as an Arkansas Razorback.

The strongest player on the University of Arkansas roster virtually from the moment he stepped on campus in 2016, the 6-3, 317-pound defensive tackle has put together a highlight reel of man-handling 300-pound blockers and dropping smaller ball carriers in a special senior season.

“What’s impressive about him is he is literally the strongest person I’ve laid my eyes on,” fifth-year senior classmate Grant Morgan said.

Marshall’s brawn has drawn double-team blocks to aid free ranging for linebackers such as Morgan and Bumper Pool.

“He’s definitely made me and Grant’s job easier this year,” Pool said. “He’s a stud.”

Marshall, a defensive captain along with Morgan, is also a bit of an anomaly as a hulking football player. He balances his mighty muscles with being among the most soft-spoken and gentle giants on the roster.

Over the Thanksgiving weekend, a family friend in Shepherd, Texas, posted a picture of Marshall holding a newborn baby while sitting in an arm chair and smiling. The picture showed the tender side of the guy she referred to as “Uncle Jon.”

That snapshot came just a few days after Marshall played with about eight stitches in his thumb in the Razorbacks’ home loss to LSU. Six of his fellow defensive linemen were out due to coronavirus issues, so not only did Marshall play with the injured thumb, he took every snap on defense and played a few more on special teams.

“That was my first time playing that many snaps, to be honest with you,” Marshall said. “It was a good experience for me to step up and be a leader for the people on the D-line.”

Marshall was the only starter available for position coach Derrick LeBlanc in that game.

“I told my coach I wanted to stay out there with the young bucks to give them their experience,” Marshall said. “So, everybody else, they were stepping up.

“I mean, you get tired, but when your adrenaline is running out there on the field [and] that takes over in the middle of the play, you forget how tired you are.”

First-year Arkansas Coach Sam Pittman would like to have a D-line full of Marshalls.

“He’s wonderful,” Pittman said. “The guy plays his tail off. He’s a fighter.”

Marshall’s attitude and work ethic have been winning admiration since he got into sports.

“He is as unique a young man as I have ever coached,” David Benbow, his defensive coordinator at Shepherd High School, told the Arkansas Democrat-Gazette after Marshall signed with the Razorbacks. “What I mean by that is this: His skill set with his attitude with just his general happy-go-lucky outlook on life is very rare.

“You get kids that are a level above their competition like Jonathan was, you start dealing with certain types of attitudes that come with it. Jonathan never missed a summer strength and conditioning workout. He never missed an open gym workout to play basketball.”

For an Arkansas defense that is built to have its linemen tie up blockers to free up linebackers and safeties for tackles, Marshall leads the front and ranks seventh on the team with 30 tackles.

Marshall and Morgan are tied for the team lead with 6.5 tackles for loss. Several times this year he has bull-rushed centers straight back into their quarterbacks.

“He just causes havoc,” safety Jalen Catalon said. “Running backs have to cut back and do things because he’s just such a weapon and such a distraction up there. J-Marsh is doing his thing.”

After Week 5, Pro Football Focus ranked Marshall second in the SEC with 22 quarterback pressures, a statistic that is not kept by SEC stat crews.

Pittman said recently he has spoken to several NFL scouts about Marshall and that he expects his model defensive tackle to get a look in the professional ranks.

“He’s played his way into being a [draft-worthy] player, I believe,” Pittman said. “And you’re not going to get a whole lot better kid than him if you take him on your football team.”

Marshall said after the LSU game that the Razorbacks’ culture will help the team rally.

“You know, blue-collar team as Coach Pitt always says, so we just keep grinding and working to see how far we can take this program,” Marshall said. “Everybody here loves playing for Arkansas, so it’s like you play for somebody you love playing for.”