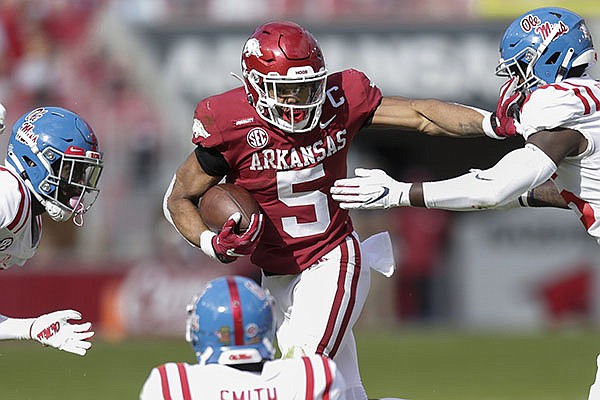 Arkansas running back Rakeem Boyd carries the ball during a game against Ole Miss on Saturday, Oct. 17, 2020, in Fayetteville.

FAYETTEVILLE — University of Arkansas Coach Sam Pittman kept his comments to a minimum Wednesday regarding tailback Rakeem Boyd’s decision to opt out of the final two games of the regular season.

Boyd, a 1,133-yard rusher in 2019 when he averaged a healthy 6.1 yards per carry, has not had a successful season. The senior suffered an ankle injury in a Week 2 win at Mississippi State that kept him out of the Auburn game, and he also missed the LSU game Nov. 21 due to coronavirus issues.

He’s second on the team to Trelon Smith with 309 rushing yards, and he averages 3.8 ypc. Boyd announced he was opting out Tuesday.

“The thoughts on Rakeem, he opted out,” Pittman said on the SEC teleconference. “So opting out means that you’re concerned about the covid virus and because of those concerns he opted out.”

Pittman also talked about what the tailback situation looks like now.

“The tailback situation looks exactly like it did last [game] against LSU, with adding Dominique Johnson,” Pittman said. “So, Trelon Smith will be our starting tailback, and you have T.J. Hammonds and you have Dominque and you have [Donte] Buckner.”

Missouri Coach Eli Drinkwitz, asked about the loss of Boyd, said he thinks offensive coordinator Kendal Briles has done a good job structuring the Arkansas run game for all the tailbacks.

“I think Coach Briles does a good job of mixing it up utilizing his RPOs as well as his called runs to set up some of his explosive passing game,” Drinkwitz said. “I think they’re very capable at that position.

“[Smith] has been an outstanding back for them all season, so I mean he had an 80-yard run against Florida. So I think they’ll be just fine.”

Feleipe Franks came to the Razorbacks with the reputation of having a huge and accurate right arm that was ideal for connecting on deep throws.

With two games remaining in the regular season, Franks’ body of work confirms the hype.

Pro Football Focus College ranked Franks the No. 3 deep passer in the country, determined by throws that travel 20-plus yards beyond the line scrimmage.

BYU quarterback Zach Wilson and Oklahoma’s Spencer Rattler were the only two players with higher grades in that department. No grades were passed along in the rankings, and PFF’s methodology was not listed.

Arkansas linebacker Grant Morgan befriended Missouri tailback Larry Rountree via their standing on an SEC leadership committee, but on Saturday Morgan would like to apply some hits on his buddy.

“He’s a good guy, really good running back, runs super hard,” Morgan said. “They have a dynamic with him and No. 1 [Tyler Badie]. They change it out a bit. But Rountree is one of those guys that’s going to be playing on Sundays. He runs super hard between the tackles. He has good enough speed and a really good jump cut to be able get out and make you miss.

The SEC lost one of its bowl tie-ins Wednesday when ESPN Events announced the 2020 Las Vegas Bowl would be canceled due to the pandemic.

The first bowl game at Las Vegas’ new Allegiant Stadium, home of the Las Vegas Raiders, was scheduled to match an SEC team against a Pac-12 opponent. The bowl was set up with a unique rotating cycle that also includes the Big Ten.

Tuesday marked the 25th anniversary of two college events with ties to the Razorbacks.

Arkansas played in its first SEC Championship Game on Dec. 2, 1995, in its fourth season in the SEC. No. 2 Florida won that game 34-3 over the No. 23 Razorbacks at the Georgia Dome in Atlanta.

Powerful Arkansas defensive tackle Jonathan Marshall showed his low-key sense of humor after LSU center Liam Shanahan dragged him to the ground on a pass play to draw a holding penalty.

Marshall was asked about the verbal exchange he had with Shanahan after the play.

“It was just him trying to say that he didn’t hold, but I was like, ‘Bro, you tackled me,’ and that was honestly the whole conversation,” Marshall said. “It was just kind of funny out there on the field.”