Barry's back, but this time on opposite side of Faurot Field 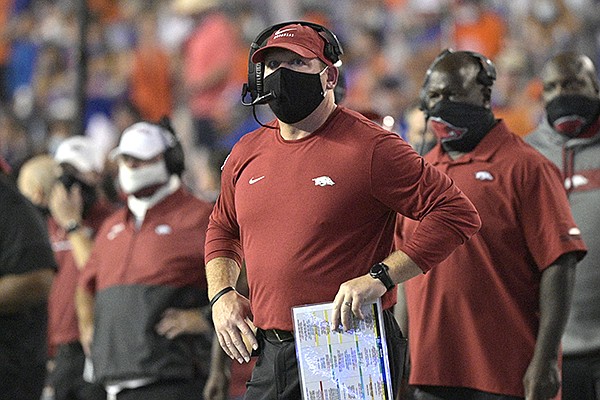 “Coach Odom was incredible to me,” said Banister, a redshirt junior from Fayetteville who has 51 career catches for 480 yards. “He was the one that gave me a shot to come walk on here at Mizzou. He was the one that ended up giving me a scholarship.

“I loved him as a coach, love him as a person, and I’m appreciative for what he did. He’s a good man.”

Banister is among many Missouri players recruited and coached by Odom, who was the Tigers’ coach the previous four seasons.

Today, Odom will return to Faurot Field as defensive coordinator at the University of Arkansas, which plays Missouri at 11 a.m. He played linebacker for the Tigers from 1996-99 and had a variety of roles in two stints on Coach Gary Pinkel’s staff, including defensive coordinator, before replacing Pinkel when he retired.

How the Hogs and Tigers compare at each position

“I think we want to go out there and play as hard as we can for Coach Odom because we know how much this means to him,” Razorbacks junior linebacker Bumper Pool said. “But his approach to every week is the exact same.”

Missouri defensive lineman Markett Utsey, a senior from Little Rock Parkview, said he’s glad he got to play for Odom.

“I feel like it helped mold me off the field as well as on the field,” Utsey said. “Going through a lot of adversity with him and seeing how he fought through a lot of stuff, it’s driving me to want to do the same things in life.

“I just really appreciate him, because I wasn’t really a big recruit coming out of high school. I had, like, two or three offers. He came and got me when he got the head coaching job a couple of weeks before signing date.

Odom was fired at Missouri the day after the Tigers ended last season with a 24-14 victory over the Razorbacks in Little Rock to finish 6-6. He had a 25-25 record as the Tigers’ coach, including 4-0 against Arkansas.

The Razorbacks hope Odom can extend his winning streak in the series to five games.

“He’s a secret weapon,” Arkansas senior linebacker Grant Morgan said. “He’s definitely on our side, and we’re glad to have him no matter what happens.”

Odom was the first staff hire for Sam Pittman after he became the Arkansas coach in December after four years at Georgia as offensive line coach.

“I think he has a lot of love for his former players,” Pittman said. “At the same time, the University of Arkansas is paying him. He wants to do a great job for Arkansas.

“I’m sure there’s a little bit of mixed feelings, just as I had playing against Georgia. But the bottom line is that Barry’s a competitor, and he will certainly have our football team ready to play.”

Odom is one of three former Missouri coaches now at Arkansas along with Brad Davis (offensive line) and Sam Carter (cornerbacks). Michael Sherrer, a former Missouri linebacker, is a quality control coach on defense for the Razorbacks.

“We want to go win the game for them,” Morgan said. “It means the world to them.”

“I’m excited to see Coach Odom,” Bolton said. “He took a chance on me and gave me the opportunity to play at the University of Missouri when nobody wanted to or thought I’d be able to.

“I’m as humble as it gets, just thankful for him taking the opportunity to come into my living room and have a conversation with my parents … A great coach that got me to come to this campus and play football.”

Missouri redshirt freshman quarterback Connor Bazelak made his first career last season at Arkansas but had to leave the game after tearing the anterior cruciate ligament in his right knee. He’s come back this season to win the starting job.

“Coach Odom was awesome,” Bazelak said. “I loved him. He was very personable, easy to talk to anytime and he cared about the players.

“I think his calm demeanor — kind of similar to me personally — is what drew me here. It’s going to be weird, I guess, playing against him since he was my first college coach.”

Odom has put together a game plan to try to stop Bazelak and the Missouri offense, and he’ll be calling the defense from the press box.

“Yeah, he’s coaching them. He’s the defensive coordinator. But this offense and myself are playing against Arkansas’ players.”

Banister said the Tigers are looking forward to talking with Odom after today’s game.

Utsey understands the added interest of Odom and other former Missouri coaches facing the Tigers.

“I know there’s a lot of rah-rah going on with our whole coaching staff being over there,” Utsey said. “But for me, I’m just trying to have the same focus as every game. Being mentally and physically ready and just doing what I can do to help my team get ready.

“I love Coach Odom, and I thank him for giving me the opportunity to play here, but it’s business. It’s nothing personal with me. It’s just playing football on my end.”