Jefferson played 'one heck of a football game' at Missouri 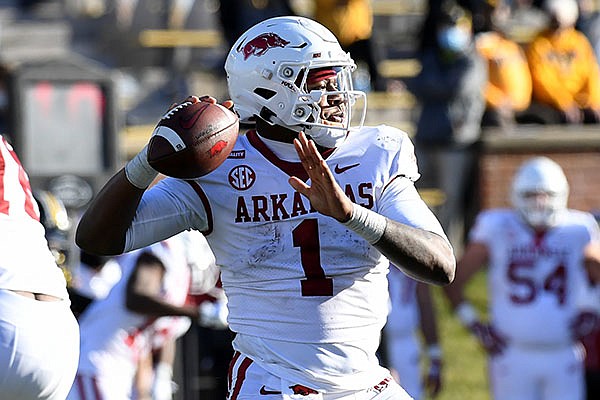 Arkansas coach Sam Pittman knew earlier in the week that quarterback Feleipe Franks was banged up. He didn’t know, though, if Franks would be able to play Saturday at Missouri.

Franks — who Tigers coach Eli Drinkwitz on Tuesday said was playing as well as any quarterback in the SEC aside from Mac Jones at Alabama and Kyle Trask at Florida — tried to give practice a go Tuesday, but he was experiencing too much discomfort in his ribs.

In his absence against the Tigers, redshirt freshman KJ Jefferson filled in admirably and performed well after some early jitters, nearly leading the Razorbacks to a thrilling road win at Faurot Field.

But Arkansas’ defense folded down the stretch and Missouri was able to win its fifth consecutive game in the series, 50-48, behind a 32-yard field goal as time expired.

“He had a really good week,” Pittman said. “We came out here today and we asked (Franks) to throw some balls to see if he could play. But obviously we knew KJ was ready. He had practiced.

“More importantly the coaching staff and the team believes in him. We certainly should, you know, with that performance.”

In his second career start, Jefferson guided the Razorbacks’ offense to its best day in terms of total yardage (556 yards) since a 661-yard output in a 58-42 win at Mississippi State in November 2016.

Jefferson completed 18 of his 33 attempts for 274 yards and three touchdowns against zero interceptions. Missouri, which owned the SEC's top pass defense entering the weekend, had allowed 272 passing yards combined in its previous two games against South Carolina and Vanderbilt.

Jefferson added 32 yards and a touchdown on the ground. Pittman said Saturday’s game, despite the loss, had to be a confidence builder for Jefferson and the entire offense.

Five of Jefferson’s completions went for explosive plays (15-plus yards) that gained 167 yards. His second touchdown pass went 68 yards to Treylon Burks, the Razorbacks’ 10th pass play of the season resulting in a gain of 50-plus yards.

Following Missouri running back Tyler Badie’s go-ahead 25-yard touchdown run with 4:47 to play, Jefferson — with help from the running game — guided the offense into the red zone behind completions of 13, 4, 9 and 8 yards. He then threw a strike to receiver Mike Woods for a 14-yard touchdown, bringing Arkansas within 47-46 with 43 seconds remaining.

It was Woods’ second catch of the day and the series. His best grab was yet to come.

On Arkansas’ 2-point conversion attempt, Jefferson rolled left and threw an interceptable pass into the end zone in Woods’ direction. But it bounced off the hands of Missouri linebacker Jamal Brooks, and Woods swooped in to make the catch, giving the Razorbacks a 48-47 edge.

“Coming into this game, I believed in KJ 100%,” running back Trelon Smith said. “He prepared all week. Me, personally, he did an outstanding job stepping up for Feleipe and just coming in and playing his butt off. We put up 48 points on offense and I feel like he just did a great job overall today.

“He’s always been a hell of an athlete. When you prepare, you’ve got to be ready. KJ, I felt like he did an excellent job preparing for this moment, and when his opportunity came, he took full advantage of it. He came out here today and he balled out.”

"It's heartbreaking,” Pool said. “The offense played amazing. Seeing KJ have that confidence today was unbelievable. He took command of that offense. When we got down, he didn't flinch, went to work, and led those guys so well.

“He made some great throws. I was so impressed with him and looking forward to seeing him continue to grow as a Razorback."