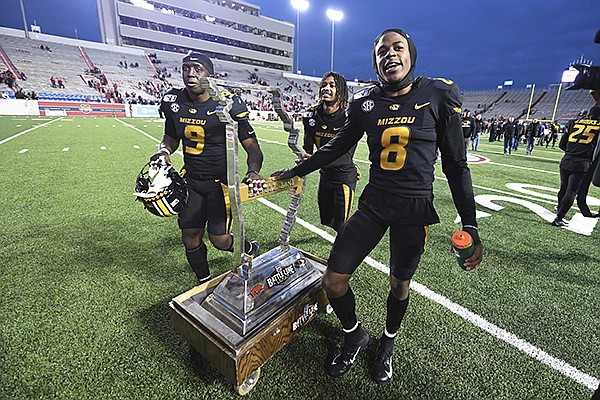 It has been for some time.

First-year University of Arkansas Coach Sam Pittman has delivered toughness, enthusiasm, hope and some thrilling streak-snapping wins to the Hill during this coronavirus-dominated fall, but he and the Razorbacks have not delivered a trophy.

Arkansas (3-5) will take its last shot of the year at claiming a piece of hardware today at Faurot Field in Columbia, Mo. The Battle Line Trophy, still in its relative infancy, is at stake for today’s 11 a.m. game with Missouri (4-3).

The Razorbacks haven’t won any of their Texas A&M, LSU or Missouri trophy games since thumping the Tigers 28-3 at Reynolds Razorback Stadium on Nov. 27, 2015.

How the Hogs and Tigers compare at each position

Pittman was the Hogs’ offensive line coach on that cold, rainy day in Fayetteville. Since then, 1,834 days have passed and Arkansas has dropped 14 consecutive trophy games.

“Missouri is our crossover game, so obviously we play them every single year, and they’ve gotten the best of us, at least for the past four years,” Pittman said. “So we’re going to try our best, like we would each and every game, to try to stop that.”

Arkansas fans probably saw their program as having an edge on the Tigers when Missouri was added as the Hogs’ permanent crossover opponent in 2014, two years after joining the SEC. It hasn’t worked out that way.

The Tigers have won five of six games since the Battle Line Rivalry began to lead the all-time series 8-3, and the Razorbacks haven’t done much to make the rivalry come alive. Even after Missouri linebacker Eric Beisel called the Razorbacks “Ar-Kansas” in 2016 — causing then-Missouri coach Barry Odom to apologize to Arkansas coach Bret Bielema — the favored Razorbacks couldn’t respond with a win. Odom had a lot to do with that by calling a successful fake punt on fourth and 7 from his own 7 in the third quarter in his first Battle Line game.

The Tigers rallied for a 28-24 victory. Missouri rallied from a 28-14 deficit the next year to win 48-45 on Tucker McCann’s 19-yard field goal with five seconds remaining. Interim athletic director Julie Cromer fired Bielema not 15 minutes after the loss.

Arkansas players understand they have to do their part to put a spark into the matchup.

“We haven’t won since 2015, so we have to earn respect,” linebacker Grant Morgan said. “Any rivalry, if a team gets beat so many times in a row, no one is going to think it’s a rivalry, even the team that’s losing. So you have to be able to go have those close games, you have to have those games where you just earn the respect of that opponent.”

“I think it’s a game for respect, and whenever you have a game like that it becomes a rivalry,” he said. “This is a big game for us and getting any trophy is huge. So yes, we’re taking it like it’s a rivalry game for sure.”

There are dueling incentives on each sideline at Faurot Field today. Odom was fired in November 2019 with a 25-25 record at his alma mater and is now the Arkansas defensive coordinator.

Missouri Coach Eli Drinkwitz is an Alma native who graduated from Arkansas Tech, and Pittman coached high school ball in Missouri and served on the Tigers’ staff in 2000.

Drinkwitz, a candidate for the Arkansas job last winter, did his part to play up the potential for the infant series this week.

“I mean, I think it’d be a lot better if we were able to play with the full crowd,” he said. “But, you know, at the end of the day there’s a trophy on the line. They’re standing in our way from accomplishing what we want to accomplish this year and we’re standing in their way. So that’s rivalry enough.

“There’s plenty of story lines however you want to create them. But the bottom line is it’s a players game and on Saturday at 11 o’clock whichever team is ready to play the most is going to win.”

Drinkwitz has instituted singing after victories and lighting up Missouri’s famous Columns to signal a win, both to create a spirit of togetherness and achievement.

“He’s trying to create his own team, his own culture, and I think he’s done a very good job of that,” said Missouri receiver Barrett Banister, a Fayetteville native. “You see it all over Twitter and all over the marketing campaigns: The new Zou.”

Pittman this season has started the catchphrase, “Turn that damn jukebox on!” to punctuate winning locker room celebrations. His agent Judy Henry had a Rock-ola jukebox delivered to Pittman’s office this week to commemorate his early successes.

Both coaches did an admirable job of complimenting their opponent this week.

Missouri enters with more relative momentum, having won four of five games with only one loss in the last eight weeks.

The Razorbacks had their first schedule disruption related to the coronavirus last week after playing their first eight games on the schedule. Arkansas was down in numbers, particularly on the defensive front in its last game, a 27-24 loss to defending College Football Playoff champion LSU on Nov. 21.

Drinkwitz and his staff began preparations for the Razorbacks the next day before the game was postponed, so he’s seen plenty of Pittman’s work in his debut season.

“They did a great job hiring same Sam Pittman,” Drinkwitz said. “He’s done an outstanding job. He’s a perfect fit for what that program needs at the time they needed it.

“He’s done a great job of providing pride in that program. Those guys are playing as hard as anybody in the country and you can see it. It starts with their head coach and oozes all the way through their coaching staff to the players.”

The Missouri players grasp the extra incentive provided for this game.

“It’s rivalry week,” linebacker Nick Bolton said. “There’s just a little bit more just because our old head coach is over there. But other than that, it’s still a player’s game.

“We still have to play at a high level. We’re not playing the coaches. We’re playing the players on the football field, and just takes all 11 guys doing the job every play.”

Missouri defensive tackle Markell Utsey, a Little Rock native who played at Parkview, was not offered a scholarship by the Bret Bielema staff. He hasn’t lost to the Razorbacks in his four seasons with the Tigers.

“It’s a great motivation for me,” he said. “I know Arkansas is coming to play. They come to play every year. Every time we play them, they compete. You’re not going to go out there and just roll the helmet out and they’re going to lay down.”

Tailback Trelon Smith is abreast of the Razorbacks’ bad run in the series.

“We haven’t beaten those guys,” he said. “There’s a chip on our shoulder, you know, for the coaches who were there. They want to win just as bad as we do. That’s our goal. We’re going to go out there and give it our all and we should do good.”

Pittman admitted the Razorbacks haven’t been doing their part in turning the Battle Line game into a legitimate rivalry.

A bus ride back to Fayetteville with a long-awaited trophy could make an even stronger statement.