State of the Hogs: Injury proved too costly 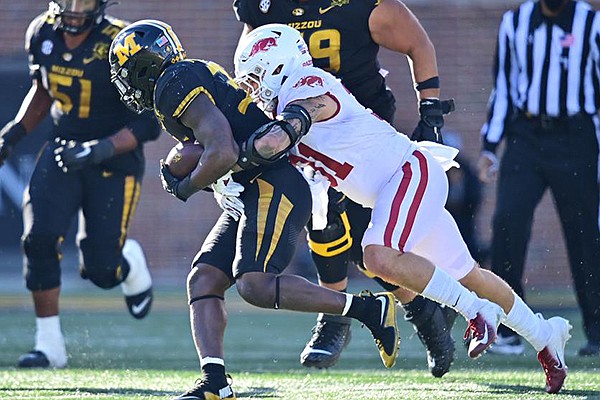 COLUMBIA, Mo. — Who is the most valuable player on the Arkansas football team?

The discussion of late has centered on Jalen Catalon, Grant Morgan or Feleipe Franks.

After Missouri’s incredible rally for a 50-48 victory, the answer seemed certain. With Morgan leaning on crutches with his former high school coach Rick Jones searching for consolation words, that’s the man the Razorbacks can’t lose.

Jones, who met Morgan at midfield after the game, won eight state titles at Greenwood and now works as an analyst for Mizzou head coach Eli Drinkwitz, an Alma native.

No doubt, the Hogs missed Catalon in the first half while the redshirt freshman safety served a suspension for targeting in the previous game, but they rallied from a 10-0 deficit to lead 27-20 at intermission. Freshman Myles Slusher and sophomore Simeon Blair filled in nicely for Catalon.

With MC Hammer’s "Too Legit to Quit" blaring in the speakers at Faurot Field, the Tigers made 297 yards on 22 snaps in a 27-point fourth quarter capped by Harrison Mevis’ 32-yard field goal as time expired.

That followed what the Hogs thought was the game-winning drive, 13 plays for 75 yards. Jefferson threw a 14-yard touchdown pass to Mike Woods, then got a lucky bounce on a 2-point pass to Woods for a 48-47 lead with 43 seconds left.

Mizzou linebacker Jamal Brooks had the 2-point pass in both hands in the middle of the end zone, but it bounced away and was scooped by Woods to set up a wild celebration in front of the small cluster of Arkansas fans.

At that point it appeared Arkansas' Sam Pittman would go 3-0 against the SEC's other first-year head coaches. The Razorbacks beat Mississippi State and Mike Leach 21-14, and Ole Miss and Lane Kiffin 33-21.

But Mizzou quarterback Connor Bazelak, also a redshirt freshman, completed all four of his pass attempts in the final minute to lead the Tigers to the Arkansas 15-yard line. Fayetteville product Barrett Banister had two of his six catches in the drive. Mevis hit his fifth field goal of the day. His earlier makes were from 51, 29, 37 and 40 yards.

The Tigers totaled 653 yards with that terrific finish. They went 75, 82, 80 and 60 yards to score on their final four possessions. It was announced as the top fourth-quarter comeback in school history.

It left the Hogs heartbroken as they fought for their fourth win in this 10-game SEC season.

“It hurts, I’m not going to lie,” said running back Trelon Smith, who was brilliant with three touchdown runs on a 26-carry, 172-yard day.

“We played this game with passion. But we came up short. It hurts.”

It hurts to play without Morgan, the nation’s leading tackler through the Hogs’ first eight games with 104. He left at the two-minute mark of the third quarter with seven tackles. The run defense was not the same after his exit. The front seven gave way in all areas.

“He’s one of our best, a captain,” Pittman said. “He’s one of our leaders and gets us lined up. He’s made a lot of tackles for us, but more than anything else, we missed his leadership.”

The Hogs did seem to get valuable leadership from their backup quarterback. He handled the Kendal Briles hurry-up system when asked and executed intricate fakes and pitches in the run-pass options. It was smooth sailing for much of the game despite his limited experience.

Jefferson completed 18 of 33 for 274 yards and three touchdowns. Except on the 2-point play when there were no options at the end of a scramble, Jefferson did not throw into coverage and stayed cool.

Pittman said Franks sat out most of the last two weeks after injuries sustained against LSU. He tried to practice Tuesday, but they put him on the shelf until two warm-up attempts with Briles before the game.

Jefferson had sparkled in practice and was locked in for most of the game. He hit sophomore Treylon Burks 10 times for 206 yards. It was a 68-yard touchdown strike to Burks — on the next play after missing an uncovered TJ Hammonds — that ignited the Arkansas offense in the second quarter.

Pittman said Franks, the Florida transfer, has mentored Jefferson since arriving in January. He and others tried to build confidence in Jefferson this week when it became obvious Franks was doubtful.

“We knew KJ was ready,” Pittman said. “The team and coaches believed in him.

“Our guys tried to build his confidence.”

On the Franks impact on that area, Pittman said, “It was big. KJ wanted to make Feleipe proud. (Jefferson) learned from (Franks) and by golly, he made me proud, too.”

The Hogs took advantage of a key loss in the Missouri defense. Linebacker Nick Bolton, like Morgan an All-America candidate, was injured in the first quarter. He sat out most of the second quarter, then was ejected for targeting three plays after returning.

That penalty came at the 1:40 mark of the second quarter and helped fuel a 70-yard touchdown march. The Hogs took a 27-20 lead just 20 seconds before halftime. The big play was a 20-yard run to the 5-yard line by holder Jack Lindsey on a fake field goal.

That play was one of the highlights in the Arkansas kicking game, sub par again with two botched extra points by A.J. Reed. One try bounced off an upright, and another resulted in a block when he kicked low into the linemen.

The Hogs had other self-inflicted issues. They kept drives alive with penalties, including offside penalties and an unsportsmanlike call against Joe Foucha for posing after a hit that should resulted in an incomplete pass.

Asked about losing 95 yards on 11 penalties, Pittman said, “That’s unacceptable. I have to coach better. Their first two drives (for a 10-0 lead) we gave them penalties. We are not good enough to help teams down the field.”

The offense was good enough, but the defense did not produce any takeaways, their key weapon for most of the season.

“Our problem was not offense,” Pittman said. “Anytime you score 48 points with 566 yards, you would be pleased. But today was a day that you had to score every time you had it and we certainly did not do that.”

Defensively, Pittman said the issues were multiple and there were several ways to stop the Tigers at the end.

“You’d like to get (an interception), or cover the guys or get a sack,” he said. “But we got no pressure and we couldn’t cover them. You can’t play man-to-man if you don’t pressure.

“But I do know what to do, but we have to do it. We have to cover and pressure. There is such a thing as winning one-on-one.

“We will work hard to figure out the defense. We played hard (on defense) all year.”

Pittman said there was no doubt what was needed after Missouri scored 21 unanswered points to take the lead with 4:47 left. The Hogs needed to score and then go for the 2-point conversion.

“I told Kendal, 'I’m going for two and end this thing,'" Pittman said. "We had a timeout and I told him, 'Let’s get the 2-point play and go home.' It was a wild play and we got it. We just couldn’t stop them.”

The Hogs said the pregame plan was to get the running game started again after LSU stuffed the Hogs two weeks ago.

“Today, we were clicking on all (cylinders),” Smith said. “The offensive line put faith in me and I put faith in them. It worked out to be one of our best games all year in the run. KJ was excellent and TJ (Hammonds) stepped up. I felt I stepped up.”

Hammonds was heavily in the game plan after running back Rakeem Boyd quit the team earlier in the week after a trip home during the covid-19-induced off week that fell on Thanksgiving.

Of course, Burks has been terrific all season.

But in the end, it was like every trip the Hogs have made to Faurot Field.

It was another “show me” day for the Tigers.