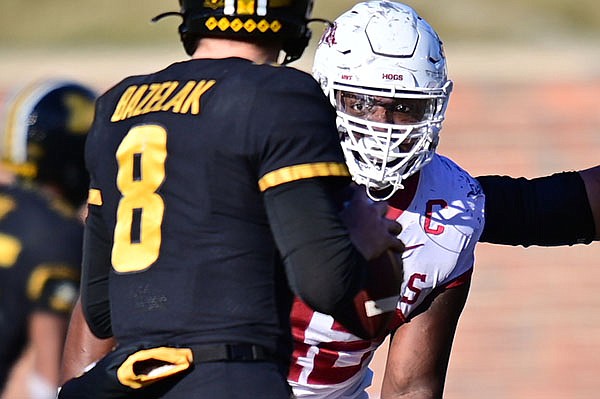 The highest-scoring game in the history of the series was full of big plays, and Missouri notched a bunch of them after the Razorbacks had to play the entire fourth quarter without Morgan.

Quarterback Feleipe Franks was unable to play as he continued recovering from an injury to his ribs. Franks suited up and went through warmups, but he was not in shape to play.

“We knew early in the week that Feleipe was beat up, and we didn’t know if he’d be able to play or not,” Coach Sam Pittman said. “He certainly tried on … Tuesday, and he just wasn’t ready.

“We came out here today and we asked him to throw some balls to see if he could play.”

Redshirt freshman KJ Jefferson got his second career start at quarterback and delivered a stirring performance with 18 of 33 completions for 3 touchdowns, no interceptions and a 154.3 efficiency rating.

Morgan’s left leg got tangled up during a short Larry Rountree run with about two minutes left in the third quarter and he did not get up. Team trainers helped Morgan off the field with what looked like a left leg injury.

Morgan came back out to the field later with a brace on his left knee, but he was unable to play and had crutches with him at game’s end as he met up with his former Greenwood High School Coach Rick Jones, who is now a special assistant to Missouri Coach Eli Drinkwitz.

“He’s our leader. He’s a captain. He gets everybody lined up,” Pittman said. “Obviously that hurt us, you know. I mean, he’s a guy that we plan on being out there.”

The Tigers scored three touchdowns and two field goals on the final five drives with Morgan off the field, and racked up 297 yards on 21 plays during their fourth-quarter comeback from a 40-26 deficit.

“Grant’s an ultra competitor,” linebacker Bumper Pool said. “Even though he got hurt and couldn’t be out there, he wished he could do everything in his power to get back out there and help us win. So, he was obviously feeling the same way we were, disappointed.”

The Razorbacks grabbed the momentum and then the lead with a fourth-down gamble late in the first half that brought a little sparkle to the Battle Line game.

With A.J. Reed lined up to try a 42-yard field goal, holder Jack Lindsey took the snap and raced 20 yards through a gap at right guard to reach the Missouri 5 on the fourth-and-5 play.

“We knew it was there,” Arkansas Coach Sam Pittman told the SEC Network at halftime. “Sometimes you know it’s there and you don’t get it. But we’d seen enough extra points to think it was there.”

Ty Clary and Jonathan Marshall both provided key blocks on the right side to spring Lindsey.

Quarterback KJ Jefferson pushed into the end zone on a 1-yard sneak two plays later to give Arkansas a 27-20 halftime lead.

Linebacker Nick Bolton, Missouri’s top defensive player, was ejected for targeting with 1:48 left in the second quarter after he made a high hit on receiver John David White on an incomplete pass over the middle.

Missouri fans booed when the targeting call was announced, and they were even more upset when the replay review confirmed targeting.

Missouri Coach Eli Drinkwitz did not object to the call.

“I think it’s the right call, based on what the definition of targeting is, upward motion, that head and neck area,” Drinkwitz said. “There was no intent to harm by Nick. He just got caught in that scenario.”

Bolton, a junior, is projected as a late first-round NFL Draft pick in some mock drafts. He came into Saturday’s game with 76 tackles, then added four before his ejection.

Razorbacks defensive coordinator Barry Odom was on the losing side of the Arkansas-Missouri game for the first time in five seasons.

Odom was 4-0 against the Razorbacks as the Tigers’ head coach the previous four seasons.

Missouri receiver Barrett Banister, a junior from Fayetteville, was a Hog killer for the second consecutive season.

Banister had six catches for 60 yards — including two key receptions to set up the field goal that lifted Missouri to a 50-48 victory.

Quarterback Connor Bazelak hit Banister for gains of 18 and 10 yards as Missouri went 60 yards in seven plays on its last series after taking possession at its 25 with 43 seconds left.

Banister, who went to Missouri as a walk-on and then was put on scholarship, also had six catches for 60 yards in the Tigers’ 24-14 victory in Little Rock last season.

Going into Saturday’s game, Arkansas senior kicker A.J. Reed had hit 94 of 95 extra-point attempts that featured clean snaps and holds, including 23 of 23 this season and 71 of 72 at Duke.

Then he failed to convert on two attempts Saturday.

After Blake Kern scored on a 2-yard touchdown pass from KJ Jefferson, Reed’s extra point try hit the left upright and bounced away.

Reed made his next three attempts, then had a kick blocked in the third quarter after Arkansas scored a touchdown to extend its lead to 33-23.

Arkansas failed to convert an extra point at Auburn earlier this season, but that was because holder George Caratan mishandled the snap and Reed couldn’t kick it.

KJ Jefferson’s 2-yard pass to Blake Kern with 1:48 left in the first quarter was the first career scoring pass for Jefferson, and the Razorbacks’ first touchdown at Missouri since the second quarter of their 28-24 loss in 2016.

Austin Allen and tight end Austin Cantrell connected on a 5-yard touchdown pass with 8:05 left in the second quarter of the game four years ago that helped the Razorbacks take a 24-7 halftime lead.

The Razorbacks went nearly 110 minutes of game time between touchdowns at Missouri.

Missouri improved to 9-3 against Arkansas with a fifth consecutive victory over the Razorbacks.

The Tigers are 4-1 against Arkansas in Columbia, where the Razorbacks’ lone victory was 7-6 in 1944.

Arkansas wore white pants, jerseys and helmets for the first time since the second game last season when the Razorbacks lost 31-17 at Ole Miss.

The Razorbacks also wore all-white uniforms at Missouri in 2018 when the Tigers won 38-0.

Arkansas fell to 2-12 in white helmets since 2012. The Razorbacks beat Texas Tech in 2014 and Eastern Illinois in 2018 while wearing white helmets.

It’s possible both could return to Missouri in 2021 with the NCAA granting all players an additional year of eligibility.

Utsey told reporters last week he hasn’t made a decision yet about next season. Utsey and Byers each had three tackles on Saturday.