Kick in the gut: After rally, Hogs lose at the buzzer 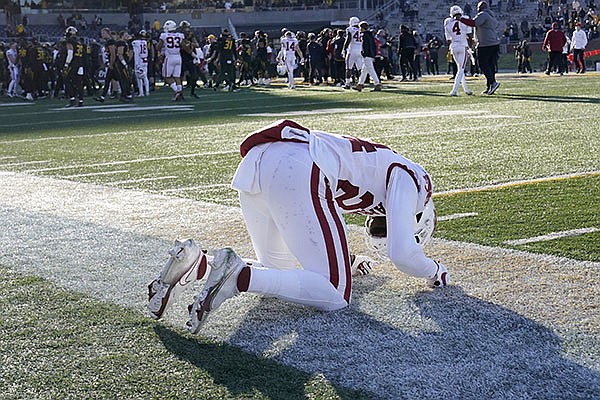 COLUMBIA, Mo. — When Mike Woods caught a two-point conversion pass on a ricochet from what looked like a sure interception, it appeared the football gods had provided the University of Arkansas the break it needed to win a wild shootout in a rivalry game.

Missouri, eager to hang on to the Battle Line Rivalry trophy, had just enough time to deal a heartbreaking response.

With 43 seconds remaining, Connor Bazelak calmly drove the Tigers 60 yards, then Harrison Mevis kicked a 32-yard field goal on the final play to give Missouri a 50-48 victory before a crowd of 11,738 at Faurot Field on Saturday.

The Tigers scored the fateful blow to cap the 98-point, 1,219-yard extravaganza.

“What a great game,” first-year Missouri Coach Eli Drinkwitz said. “What a tribute to our seniors on senior day, to the toughness and tenacity that our program shows.”

On the other sideline, the pain ran deep.

“I’m not going to lie, it hurt me,” tailback Trelon Smith said. “I played this game with a passion. I wanted to get this W.”

Added linebacker Bumper Pool: “When you lose a game like this, it just irritates you, it frustrates you, it fires you up in so many ways that you want to get back out there and go to work and get another shot.”

The Razorbacks (3-6) dropped their 15th consecutive trophy game and their fifth in a row to the Tigers (5-3) after taking a 40-26 lead early in the fourth quarter behind stellar play from freshman quarterback KJ Jefferson and big-time performances from receiver Treylon Burks and Smith.

Arkansas defensive coordinator Barry Odom, who had been 4-0 in the rivalry as head coach at Missouri, lost his first game in the series as the Razorbacks gave up 653 yards to the balanced Missouri attack.

“The offense wasn’t the problem,” Pittman said. “We have to stop them. But I’m proud of the guys, how they played on offense, and we’ll work hard and get the defense figured out. We will. They’ve played well all year, and we’ll get them figured out. We’ve got a great defensive coordinator.”

Jefferson got the start in place of senior Feleipe Franks, who has been slowed by a rib injury suffered late in the loss to LSU two weeks ago.

Drinkwitz, the Arkansas native, improved to 2-0 in trophy games as the Tigers won for the fifth time in six games.

“I told them at halftime, no great story is fun unless you have a little adversity,” Drinkwitz said, after Arkansas rallied from a 10-0 deficit to take a 27-20 lead at the half.

Drinkwitz had an interesting perspective on Mevis’ field goal as time ran out.

“Honestly, I looked across the field, and I was on about the 50 and Sam was on the 50, so I just watched him,” Drinkwitz said. “When the ball was kicked, he put his head down and I knew we won.

“I feel bad for them. They played a really, really good game, to play as well as they did without their starting quarterback. KJ Jefferson was unbelievable today.”

The Razorbacks and Tigers traded huge plays and big drives all game long, and saved plenty of drama for the end.

The Razorbacks took over with 4:47 remaining facing a 47-40 deficit after Tyler Badie’s 25-yard scoring run gave the Missouri offense its third touchdown in just 8:28 of game time.

Jefferson was calm and confident as the trigger man. He converted a third-and-10 play with a 13-yard strike to Burks. A 13-yard run from T.J. Hammonds got Arkansas into Missouri territory. Three plays later, the Razorbacks were at the Tigers’ 24 when Burks converted a fourth and 1 by stretching just over the line to gain.

On the next snap, Woods ran uncovered down the left sideline, and Jefferson hit him with a 14-yard touchdown pass with 43 seconds left.

Pittman already had let offensive coordinator Kendal Briles and the offense know the Razorbacks — who had missed one point after touchdown and had another blocked — were going for a two-point conversion trailing 47-46.

“Yeah, no doubt,” Pittman said. “They had scored 21 in a row, and they went up seven on us. In that last drive, I told Kendal, ‘I’m going for two. I’m going to end this thing. We’re having a hard time stopping them, we’re going to seal this game and go home.’ ”

Jefferson rolled to his left on the two-point pass, and it looked doomed when Missouri linebacker Jamal Brooks had it in his hands as he was falling to the turf. Woods came along and plucked it out of the air after Brooks let it slip away for a conversion.

“It was a wild play, but we did get it, Pittman said. “And then we couldn’t stop them.”

Bazelak completed 4 of 4 passes for 54 yards, working the left sideline early to save time, then finding Fayetteville native Barrett Banister over the middle twice for 28 yards as the Tigers roared into scoring position.

Bazelak completed 32 of 49 passes for 380 yards with no touchdowns or interceptions. Larry Rountree ran for 185 yards and 3 touchdowns, while Badie provided 79 yards and 2 scores on 6 carries.

The teams traded offensive blows in a turnover-free game. Each team also lost the heart of its defense when Missouri linebacker Nick Bolton was ejected for targeting in the second quarter, and Arkansas linebacker Grant Morgan injured his left leg late in the third quarter and did not return.

Arkansas racked up 566 yards, a season high by more than 100 yards, with Jefferson completing 18 of 33 passes for 274 yards and 3 touchdowns.

Burks and Smith also had career days. Burks caught 10 passes for 206 yards and posted 220 all-purpose yards, including a 68-yard touchdown that pulled Arkansas into a 13-13 tie early in the second period.

The Razorbacks got out to a slow start offensively with a three and out on their first possession and fell behind 10-0.

Jefferson found his rhythm late in the first quarter by directing a 75-yard touchdown drive to get Arkansas back in contention.

A defensive holding penalty on Joshuah Bledsoe on a third-and-10 incompletion triggered the drive. Jefferson converted a fourth and 1 with a 3-yard quarterback sneak, then found Burks for 15 yards to the Missouri 28. Jefferson helped himself with a 16-yard scramble over the left side to reach the 9, then cornerback Jarvis Ware drew a pass interference on Mike Woods. Jefferson threw a play-action pass to tight end Blake Kern on the next play for a 2-yard touchdown.

Yet because A.J. Reed missed the extra point off the left upright, Burks’ 68-yard deep ball touchdown created only a 13-13 tie in the second quarter.

Arkansas scored the final two touchdowns in the opening half on Smith’s 8-yard burst through the middle and Jefferson’s 1-yard sneak with 20 seconds left in the half to move ahead 27-20.