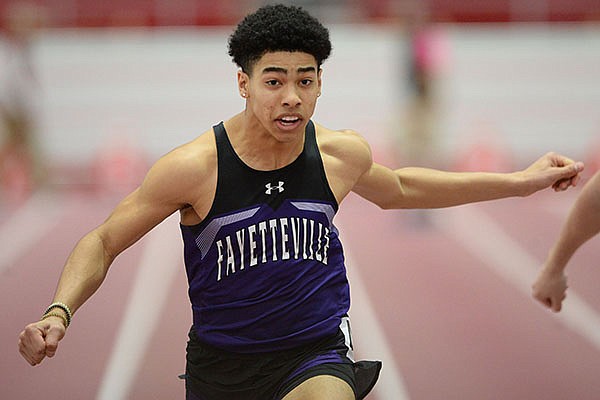 Isaiah Sategna of Fayetteville leans in at the finish Saturday, Feb. 29, 2020, of the 60 meters during the 5A/6A State Indoor Track and Field Championships in the Randal Tyson Track Center in Fayetteville.

Fayetteville junior Isaiah Sategna is a sought-after wide receiver in football, but he’s also one of the top track and field prospects in the nation.

Sategna, who was named the Northwest Arkansas Democrat-Gazette Newcomer of the Year in track as a freshman, is MileSplit’s No. 4 prospect for the 2022 class.

Despite missing his sophomore outdoor season because of the coronavirus pandemic, Sategna’s resume as a freshman is something the state hadn’t seen from such a young athlete.

According to MileSplit, his 37.67 in the 300 hurdles is the fifth fastest freshman performance at the distance since 2000. The national freshman record is 37.22 by Thomas Burns of Miami Northwestern in 2015.

“In the past, my best events have been the hurdles and the long jump, and then last year I got faster,” said Sategna, who was voted the Class 7A Offensive Newcomer of the Year by the league’s coaches.

Sategna, whose father is Arkansas track assistant Mario Sategna, set a state indoor record in the long jump with a leap of 24 feet, 1 1/2 inches. The jump was No. 7 overall nationally, and was just shy of the national freshman record set by Mike Newell in 1996 with a leap of 24-5.

His 7.88 seconds in the 60 hurdles as a sophomore was rated by MileSplit the fifth best time in the nation.

The indoor long jump was near perfection for Sategna, but it was also a source of frustration.

“That one jump I just put everything together and did the right thing on all of my phases,” Sategna said. “I couldn’t replicate it outdoors, which I was kind of mad about.”

The state overall record for the long jump of 24-5 3/4 outdoors was set by Joseph Wright of Conway in 1986. The Class 7A state record of 24-3 1/2 was set by Pine Bluff’s Basil Shabazz, who’s considered one of the best athletes and football prospects in state history.

In his first meet for the Bulldogs as a freshman, Sategna broke a 17-year-old school record in the 300 hurdles with a time of 38.32.

“As a ninth-grader, he came out the first time and broke our record by almost a second and it’s been there for 17 years,” Fayetteville track Coach Drew Yoakum said. “You knew right at that point at the 300-meter hurdles, he was something special.”

Karl Koonce coached track and field for 46 years, including 38 years at Lake Hamilton before retiring in 2019. His teams have won 29 state championships.

“I wouldn’t rule out a state record for any of those six, but his best chances are the long jump and the 300 hurdles,” Koonce said. “He’s closer to those state records as a freshman.”

Koonce hasn’t seen an athlete who excels in as many events as Sategna.

“I’ve seen kids that have a great range of abilities in a lot of things, particularly decathletes, but again it wasn’t at this level,” Koonce said.