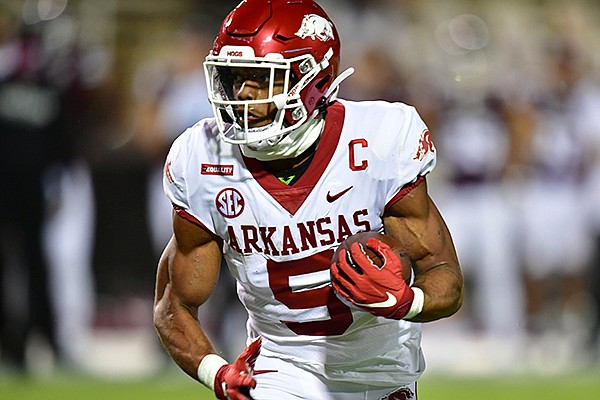 Arkansas running back Rakeem Boyd carries the ball during a game against Mississippi State on Saturday, Oct. 3, 2020, in Fayetteville.

The annual all-star game will not be played as scheduled in January due to the coronavirus pandemic, but game organizers are announcing selections to recognize players who would otherwise participate in the game. Those selected to this year's roster will be eligible to participate in virtual training and informational sessions with NFL coaches and executives prior to the 2021 NFL Draft.

In eight games this season, Franks has passed for 2,017 yards and 17 touchdowns against four interceptions. He has completed 68% of his passes and connected on 21 of 36 throws 16-plus yards at depth for 851 yards and eight scores.

Franks, who did not play at Missouri because of a rib injury, has rushed for 229 yards and a touchdown.

Boyd left the Razorbacks' football team last week with two games remaining in the season. Arkansas coach Sam Pittman characterized Boyd's decision as an opt out due to concerns over the virus.

Boyd said he would use the time to prepare for next year's draft.

Boyd rushed 82 times for 309 yards and three touchdowns in seven games this season. He rushed for 1,173 yards and eight touchdowns as a junior.