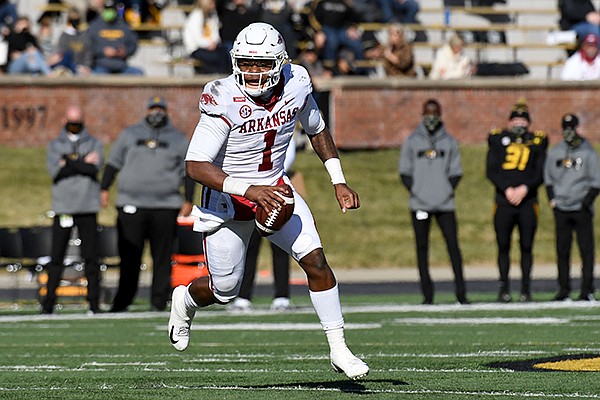 FAYETTEVILLE — Below is an analysis of Arkansas quarterback KJ Jefferson's second career start after a re-watch of the Missouri game:

Best throw: There were several to pick from, but I thought Jefferson’s 41-yard completion to Treylon Burks on third-and-15 early in the third quarter was above the rest. He showed off great arm strength and got the ball to Burks 19 yards downfield on a rope. The touchdown pass to Mike Woods to pull Arkansas within 47-46 was great, too, as was the throw to Burks for the 68-yard score.

Worst throw: Jefferson’s interceptable pass intended for running back Trelon Smith on the Razorbacks’ final series. He attempted to squeeze the ball into a tight window. Two Missouri defenders were in the area. It turned out to be the first of two dropped interceptions for Tigers linebacker Jamal Brooks in the final five minutes.

Analysis: Many suspected the Razorbacks were in for a long day offensively at Missouri when word came in that quarterback Feleipe Franks would be unable to play due to a rib cage injury. After shaking off some early jitters, redshirt freshman KJ Jefferson filled in and did so admirably in his second career start. He finished with 278 passing yards and accounted for four total touchdowns, including three through the air. Jefferson picked up 32 yards on the ground, too, with a long run of 16 yards that set up a touchdown.

Entering the game, the Tigers owned the SEC’s No. 1 pass defense, allowing fewer than 240 yards per game to opposing quarterbacks. But, as the game wore on, Jefferson showcased tremendous poise and potential, leading the Razorbacks to their best output in terms of total yards and points in a road game since 2016. If not for a defensive letdown in the game’s final minute, Jefferson would have been the hero in win No. 4.

“He ran the offense incredibly fast,” Sam Pittman said Monday. “I mean, anybody could see he had a great football game. He took care of the ball, he ran the offense, and certainly I’m really, really proud of him. After the game he was very emotional. I certainly can appreciate that. I loved everything about him on Saturday. I really did.”

Jefferson, like Franks in recent games, found a good bit of success on throws 16-plus yards downfield. He hit 3 of 7 against Missouri for 130 yards and a touchdown, and 6 of 11 passes that traveled 11-plus yards. According to Pro Football Focus, Jefferson had the second-highest passer rating in the country on 20-plus yards attempts last week (143.8).

Burks was on the receiving end of all three completed deep balls. I thought Jefferson did a terrific job targeting and getting his top target involved. Burks, who had eight catches in the previous two games combined, saw 15 passes come his way in the loss. He finished with 10 catches for a career-high 202 yards.

I credited Jefferson with six inaccurate passes, one more than Franks’ season high in games against Georgia, Mississippi State and Auburn. He also threw an interceptable pass on the Razorbacks’ final series that could have been costly, but it was the only ball he put in serious jeopardy. On Arkansas’ last drive, he shook off a pair of incompletions on first and second down and went on to complete five of his next six passes to three different receivers for 48 yards and a touchdown. He showed a lot of guts in that sequence and handled adversity as well as he could have.

It is unclear if Jefferson will see the field full-time again Saturday against No. 1 Alabama. If Franks does not progress in a positive manner with his injury this week, Pittman said he has “no problem at all” giving the keys to the offense back to Jefferson. Should Jefferson start, it would be his second against an Associated Press No. 1 team in three starts.