Finding her way: Marquesha Davis settling in with Razorbacks 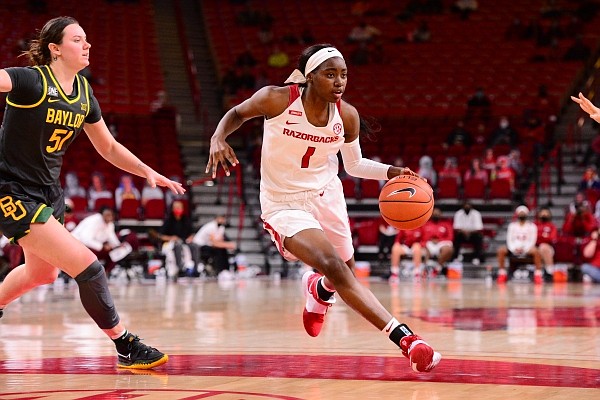 Arkansas guard Marquesha Davis dribbles into the lane during a game against No. 4 Baylor on Dec. 6, 2020, in Bud Walton Arena in Fayetteville.

FAYETTEVILLE — Arkansas coach Mike Neighbors and his coaching staff have watched Marquesha Davis do things and make plays in practices that make them, in a positive way, collectively shake their heads.

The Razorbacks’ fourth-year head coach and followers of Arkansas women’s basketball are now seeing those flashes in games under the bright lights. Davis, a 6-0 sophomore guard from Springdale, oozes length and athleticism.

She used those tools and a growing love for the defensive end of the floor to help the Razorbacks pull off one of the biggest wins in program history on Sunday against then-No. 4 Baylor. Off the bench, Davis added eight points on 4 of 7 shooting, grabbed four rebounds and finished with four steals, her second most in a game this season. Two steals came in her five fourth-quarter minutes.

Arkansas, in her 15 minutes in the lineup, outscored the defending national champions by nine points (36-27).

“It’s not just Marquesha, it’s her teammates have confidence in her,” Neighbors said Sunday. “Like, I heard (Destiny) Slocum say something to her, like, ‘Hey, can you give us a lift right here?’ She immediately tipped two balls away. I credit her in this manner, and the people around her, her high school coach Heather Hunsucker and her family: She sat there last year and she watched a lot. She learned a lot.

“And now she can settle in and play basketball.”

Amber Ramirez, who led Arkansas with 23 points against Baylor, has seen Davis begin to come out of her shell in recent games. In the Razorbacks’ finale in the Gulf Coast Showcase, she scored 15 points and tallied three steals. Four days later, Davis added 14 points and three more steals in a win over Louisiana-Monroe.

She then confidently provided a key spark off the bench on Sunday.

“She’s going to be big for us down the stretch in some of the other games that we play,” Ramirez said. “(Against Baylor), she was huge for us.”

Davis and Hunsucker, the girls basketball coach at Springdale High, caught up at dinner last Tuesday, and the sophomore spoke excitedly about Arkansas’ upcoming games. Sunday, Hunsucker watched with a great mixture of emotions as her former standout starred in her role.

She isn’t so sure that Davis wasn’t the best athlete on the floor in the game.

“My heart was ready to come out of my chest,” Hunsucker told WholeHogSports. “I was so proud of her for the way she contributed to her team in crunch time. It was all about her finding her way. She’s found how she can contribute to this team in a positive manner. I was so dang proud. Dang covid, I can’t get on the floor anymore.

“I texted her and said I wished I could give her a big hug. I can’t really put it into words. Her teammates were so happy for her. They just swallowed her, and that maybe means more to me that her teammates wanted to see her succeed. That means to me she’s being a good teammate.”

Hunsucker, too, has seen Davis, who moved to Springdale from McGhee as a ninth grader, make more than a handful of head-shaking plays on the floor. With the Lady Red’Dogs, she showcased a knack for chase-down blocks and pinning layups to the backboard, sometimes with her left hand.

And often times she corralled her own blocked shots and initiated a one-man break, finishing on the other end after dribbling through and around multiple defenders. Davis’ play against Baylor reminded Hunsucker of many of those moments in her prep career.

“She’s just kind of figuring out that’s an area she can specialize in. To see the confidence grow, that came from her work and being on campus for a year. I just really do see a whole different maturity.”

The success Davis found last weekend also made the coach reminisce on what she and Davis have gone through since she arrived from southeast Arkansas.

As a freshman, Davis moved into an apartment with her mother and sister across the street from George Junior High. That year, she led the program to its first regional championship and was named regional MVP.

The following year, some of her siblings moved to Springdale and she changed addresses again, this time to one close to the high school. Davis was putting together a strong sophomore season, then, near the end of the schedule, her life took another turn. Her family opted to return to McGhee.

“I’ll never forget her having these inner struggles about whether she was going to stay here or go back,” Hunsucker said. “I just told her, ‘You have to do what is best for you. Selfishly, I want you here, not because of wins and losses, but because I really do believe we can help you get to the next level.’ She decided to stay here.”

Davis moved in with her uncle and her aunt near Lakeside Junior High to start her junior year. She grew roughly another inch and started to fill out her wiry frame. But more heartbreak was on the way.

Hunsucker received a phone call at dinner one night during Springdale’s conference season. The Lady Red’Dogs were gearing up to play Rogers High the next day, but Davis’ mother informed the coach that Marquesha would not be able to play in the game. Davis’ father was in the hospital in Jonesboro, and the outlook was bleak.

Davis was on the road, near Jonesboro, when her father passed away. She was unable to say goodbye.

Going into her senior season at Springdale, she moved in with her oldest brother, who lived in town. They are very close, Hunsucker said, but he worked nights. Some days they had to brainstorm ways to get her to school, and several nights she completed homework at the school and in the gym rather than returning to an empty home.

“I knew that’s when she was serious about being good,” Hunsucker said. “She would have left if she wasn’t serious about her future, and she could have easily taken advantage of that situation. Instead, she turned it into something positive. I’m so happy she chose to stay at Springdale, not because of the wins and losses, but getting to watch her go from a kid in ninth grade who we thought could be a D-I kid to watching her do what she did the other night.

“In Springdale, kids look to her as a role model. Everything wasn’t easy for her and she’s still making it.”

Prior to enrolling at Arkansas at just 17 years old, Davis averaged 21.3 points and 10 rebounds per game as a senior. She also eclipsed 1,000 career points during her junior season and broke Springdale’s single-season scoring and rebounding records.

It is likely that Razorbacks fans have not seen the last of her 'wow' moments. Her next opportunity in that regard comes tonight at SMU.

“I don’t think she’s done with those,” Hunsucker said. “And it means a lot to me just in the way that she represents Springdale. I know a lot of Springdale fans are proud of the way she played the other day. She has a humongous heart.

“She doesn’t have a silver spoon in her mouth, and it makes her appreciate success so much more.”