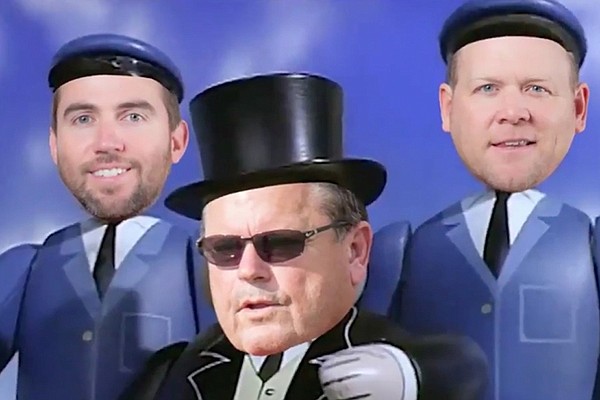 Arkansas head coach Sam Pittman, defensive coordinator Barry Odom and offensive coordinator Kendal Briles are depicted as train conductors in a video put out by the Arkansas football account after the Razorbacks 33-21 win over Ole Miss.

"A lot of it is dictated by results," said Rachael Harris, assistant director of digital strategy for the Arkansas Razorbacks. "We're kind of in a position now when you win games you get to have fun."

Arkansas' social media team has drawn attention this year for their after-win antics. From Lane Kiffin to Tennessee, no program has escaped poking from the Razorbacks social media team, but these aren't just hastily put together thoughts posted on social media. Some of these ideas take weeks or even years to finally reach a fan's screen.

When Harris first decided to download Twitter she was in college at the University of Arkansas. She remembers taking out her Blackberry, browsing her new Twitter homepage and being unimpressed.

"I was like Twitter is the stupidest app. Why would you do anything on this and I deleted it," Harris said. "So that was my first experience with Twitter."

Her start with Facebook didn't make a great first impression either.

"I wasn't allowed to have Facebook until the eighth grade, and even then my mom had my login and would go in and check my page to make sure I wasn't doing anything fishy as an eighth grader," she said. "So it's not like I grew up a digital savant or anything."

Brooks Cockrell, Arkansas' assistant director of football video and creative media, didn't even know a job like his existed when he was in college. He started as a coaches' film student assistant at Arkansas State, but started paying attention to the social media side of things before he graduated.

"When Twitter started to become really popular I kind of started getting into that over in Jonesboro, and it just kind of blew up, really," Cockrell said.

After college Cockrell made his way to SMU, then he followed Chad Morris to Arkansas. Cockrell was overjoyed when he found out how many people worked in Arkansas' social media and video department.

"When I was at SMU it was more of a smaller operation in terms of how many other people were involved," Cockrell said. "Then (I) got to Arkansas and it was like, 'Holy cow there are actually people here to help with this stuff. This is amazing.'"

But why would athletic departments spend time and resources on social media? Because that's where the fans are.

Twitter averages 330 million monthly users, 145 million daily users and 22% of Americans are on Twitter, according to Brandwatch.com. On Facebook the number is even bigger. There are 2.7 billion accounts on Facebook and 190 million United States users according to statista.com.

With so many accounts, the Razorbacks' social media team wanted to find a way to stand out.

According to Harris, Arkansas' social media strategy is to support the athletes, build a community of Razorback fans and have some fun. Emphasis on that last point.

"We're never going to be snooty or trying to hold our nose up above everyone else," Harris said. "We just want to be down to earth, fun to hang out with (and) celebrate the successes we have as much as we can. So it's definitely a little more down to earth, a little more willing to laugh and just go with the flow.

"It's certainly not a scenario where we just now figured out how to make a meme and post it online. Obviously a lot of it is dictated by results."

Coming into 2020, Arkansas had won just one SEC game in the last three seasons and was a combined 6-28 over that span, so the opportunities to get creative on social media were few and far between. But with three wins over three SEC teams this year, the Razorbacks have been able to let loose on social media.

"(Pittman's) been great, and obviously he's a sound bite machine which makes our job easier," Cockrell said. "Winning games has made things a lot easier, too. The team is playing well and the better they play the easier our job gets."

Arkansas' 21-14 win against Mississippi State gave the social media team its first opportunity. They did not miss.

"Obviously we were prepared for the Georgia game to have something to post," Harris said. "We were prepared at the Auburn game to have something to post, but (Mississippi State) we prepared and we actually got to post it. So that's always the best part of the night, and I guess it was kind of like the first time that we've really gotten to do that, and so it felt really really good for our student athletes to get to celebrate and for us to get to celebrate as well."

How did the social media team celebrate? With two posts playing off of Mike Leach and his love of all things pirate.

Back to Fay we go @RazorbackFB pic.twitter.com/QWxMGRQuqO

Then two weeks later, a 33-21 victory over Ole Miss gave Harris, Cockrell and the entire social media team an opportunity to derail the "Lane Train."

"We're never going to go after the student athletes of another school," Harris said. "If we're going to put a dig on someone it's going to be the person making millions of dollars, right? So I think for us that's kind of always our starting point... We went through several different iterations of train footage and eventually just kind of figured that Thomas the Train engine would be the most understandable one, and would kind of translate the best visually so that's where we went with that one, and seeing that one blow up really was awesome."

Despite the success of the idea, Harris still had her doubts about it going into the Ole Miss game.

"(Graphic Design Assistant) AJ Enloe was the designer that made the magic happen, but we were sitting there at his computer putting pieces together and kind of looked at each other and were kind of like is anyone actually going to get this? Is anyone actually going to think it's funny?" Harris said. "So to see everyone latch on to it as much as they did is really really awesome."

But the Lane Train video wasn't the only one posted after the Ole Miss game. Immediately after the game a post depicting a hog hunting an Ole Miss player in the water, like the famous Jaws movie poster, finally surfaced after a few years of waiting.

"(Cody Vincent, Assistant Director of Recruiting and Graphic Design) made the Hogs as jaws one for the Ole Miss game, and he's been sitting on that one for a little bit," Harris said. "So it's never just 'Oh now we'll never get to use that.' There are certain times that we can bring something back up, and finally get to bring it out of the vault, if you will."

Ideas for the game are normally figured out in the beginning of the week, and are complete by Friday night. But some are spur of the moment, like what the Razorback football account tweeted the day after the Ole Miss game.

"I will brag on that one. That one was something that I did," Cockrell said. "I was up here Sunday morning after the Ole Miss game and I was just kind of thinking about it, and I just thought his response to that question was so funny to me, but if you know Coach Pittman, you know that's just how he talks. He wasn't trying to be funny or anything like that, that's just how he is. He's a very straightforward guy. I just thought it was funny and threw that together and it ended up blowing up which is insane."

Harris knows when it comes to social media eventually something is going to flop.

And you have to expect the other teams to have some fun at your expense, like when Missouri used Pittman's signature "yes sir" catch phrase after beating the Razorbacks on a last-second field goal last week.

Did Mizzou just have their largest 4th quarter comeback in school history? pic.twitter.com/jVJu2QzPDB

A fine line the creative team rides is finding content that is funny and current, but not so current that it alienates a portion of the fan base. They rode that line with a post after the Tennessee game.

The game Among Us has taken off recently among college-aged students. In its most basic form, the game tasks imposters to kill off crew members aboard a ship before the crew members figure out who the imposters are and vote them off the ship.

Both Harris and Cockrell had never played the game before, but they still felt the post was relatable enough that most people would understand it.

"That one was really fun, short, sweet and to the point," Harris said. "I felt like even people that didn't get it, (and) hadn't ever heard of among us were like 'Oh that makes sense OK', and it's easy to grasp. That's the thing: we can't make anything that's too complex. We want to make sure that everyone can understand it right away."

Despite the nuances that go into their posts, Harris said the social media teams job is pretty basic.