Pittman proud of team's effort in '20 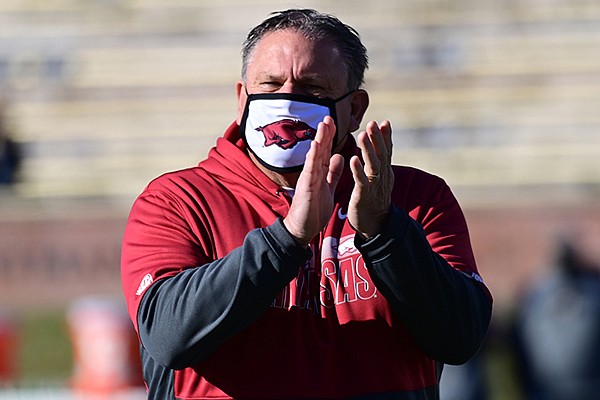 FAYETTEVILLE — The University of Arkansas was an underdog in all 10 games of its coronavirus-restricted, SEC-only football season.

Many analysts went on record to predict an 0-10 campaign for first-year Coach Sam Pittman, who inherited a team with one SEC win in three years and a 19-game conference losing streak.

The Razorbacks (3-7) capped their regular season Saturday with a 52-3 loss to No. 1 Alabama, the only game in which they fell truly out of contention by halftime. Arkansas is expected to receive and accept a postseason bowl bid Sunday, its first since 2016.

Pittman was asked last week to reflect on how he would remember the seniors on his first Arkansas team.

“This team, the ones that stayed with us, I think you can ask them, and I think they’re proud of being an Arkansas Razorback,” Pittman said. “I’m not saying they weren’t in the past. But I’m proud of them.

“I’ve been really, really proud of this group. And they’ll always be the group that I think about because of my first ever Division I football job. So very, very, very thankful for that group.”

The Razorbacks will begin adding to their 2021 roster today with the start of the early signing period, in which Arkansas is expected to add up to 20 scholarship players for a class that was ranked No. 20 in the 247Sports.com composite rankings as of Tuesday.

Pittman has been adamant that the progress shown by Arkansas this fall was only the start to something bigger.

Prior to the 49-point loss to Alabama, Pittman and his staff:

• Engineered a 21-14 road upset at then-No. 16 Mississippi State, which had posted 632 yards the week prior in a win at defending College Football Playoff and SEC champion LSU.

• Had the Razorbacks in position to upset then-No. 13 Auburn 28-27 on the road prior to a last-minute erroneous officiating decision.

• Derailed the Lane [Kiffin] Train of Ole Miss with a seven-takeaway performance in a 33-21 win over the Rebels at home.

All three of those games happened in succession early in the year as Arkansas displayed its toughness under the new regime.

“I think Pittman changed our whole mindset from the get-go with what he sold to us and kind of what he wanted our team to be about, and I think everybody bought in right when he stepped in the building,” said redshirt freshman safety Jalen Catalon, a Thorpe Award semifinalist and a strong candidate for other postseason honors with 99 tackles, 3 interceptions and 7 passes defended.

The Razorbacks — who along with Tennessee were the only SEC teams to face the big four of Alabama, Florida, Georgia and Texas A&M this season — responded to road loss at then-No. 8 Texas A&M with a come-from-behind 24-13 win over the Volunteers to improve to 3-3.

Arkansas lost its last four games as injuries, opt-outs and covid-19 issues depleted the roster. Two of them were within grasp: a 27-24 home loss to LSU, and a 50-48 defeat at Missouri.

In the first of those, Arkansas had a potential game-tying field goal blocked late in the game. In the second, Pittman rolled the dice with a two-point conversion try with 43 seconds remaining. Mike Woods caught the deflected two-point pass from freshman KJ Jefferson to give Arkansas a short-lived 48-47 lead.

Pittman summarized his thoughts on the season two days before playing Alabama.

“I love the team,” he said. “There’s been some heartbreaking losses that you wish you had made a play here or there. At Auburn. At Missouri. And, obviously against LSU. We’re 3-6. They beat us. That’s the bottom line. They beat us.

“I wish we could have given this football team, this state, a couple more wins on the left. Another couple of numbers on the left.”

Alabama Coach Nick Saban pointed out how close the Razorbacks were to being 6-3 prior to their game. Then his Crimson Tide joined Georgia, Texas A&M and Florida among the four teams who won handily over the Hogs.

“A&M and Georgia and Florida, they’ve got a little bit more depth, and things of that nature, at this time than we do,” Pittman said last week. “The other teams we match up very well with, and I don’t know that we did in the past. So, I’m very excited about the future.