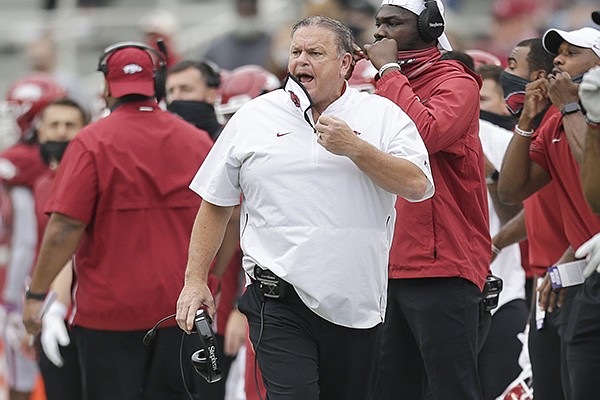 FAYETTEVILLE — Proximity to a team’s campus is expected to play a prominent role in the selection of teams for bowl games this year, the director of a national bowl alliance said Wednesday.

Nick Carparelli, the executive director of Bowl Season (formerly the Football Bowl Association) said geography typically isn’t the “overriding factor” for bowl selections, but it likely will factor more into discussions this year as teams weigh playing another game during the coronavirus pandemic.

“In all my conversations I think the conferences and their bowl partners are going to throw the pre-prescribed selection order out the window a little bit and make matchups that make a little more geographic sense,” Carparelli said, “just to save on travel time, travel costs and to make it all as safe as possible.

“I fully expect you’re going to see a lot more regional matchups in bowl games than you typically do.”

Arkansas (3-7) is expected to receive a bowl bid this season because the NCAA for one year eliminated a minimum-win requirement to qualify for the postseason. The Razorbacks might fit into one of the SEC’s “pool of six” bowl games that include the Outback, Gator, Liberty, Music City, Texas and Armed Forces bowls.

Other affiliated SEC bowls include the Birmingham Bowl and the Gasparilla Bowl in Tampa, Fla.

The Liberty Bowl in Memphis, Tenn., is the closest bowl in proximity to Arkansas’ campus in Fayetteville, about 320 miles by car. The next-closest bowl game affiliated with the SEC is the Armed Forces Bowl in Fort Worth, Texas, about 360 miles from Fayetteville.

The Texas Bowl at Houston’s NRG Stadium is 516 miles from Arkansas’ campus, and the Music City Bowl at Nissan Stadium in Nashville, Tenn., is 530 miles away. The Outback and Gator bowls are played in Florida, more than 1,000 miles away.

“I would imagine, you know, it would be somewhere within the Texas, the Armed Forces, the Music City, possibly the Liberty Bowl,” Arkansas coach Sam Pittman said Wednesday when asked about the possibility of playing in a bowl game.

Pittman said it would be ideal to play in a bowl game that would be an easy trip for fans.

"All those bowls are located well. We just want to go, and when we go we want to win it. So whichever one we can go in there and play well and win, that’s the one we’d like to go to.”

“I don’t predict a lot of that happening,” Carparelli said, “but it’s certainly a possibility.”

Pittman said the Razorbacks will begin practicing Thursday in preparation for a bowl game. Arkansas is not expected to learn its destination or opponent until Sunday.

“Obviously we don’t know who we’re playing, but we can still do fundamentals and things of that nature,” Pittman said. “Then on Monday, whoever we have and wherever we’re going, we’ll be really, really excited to go do that.”

Carparelli said teams are likely to spend less time at bowl sites this year than in years past. This year’s trips might more resemble two-day trips to regular-season road games than the week-long trips many teams normally take to a bowl site.

Attendance is expected to be extremely limited for bowl games. Carparelli said capacity limits will be determined by the bowls in cooperation with their local authorities.