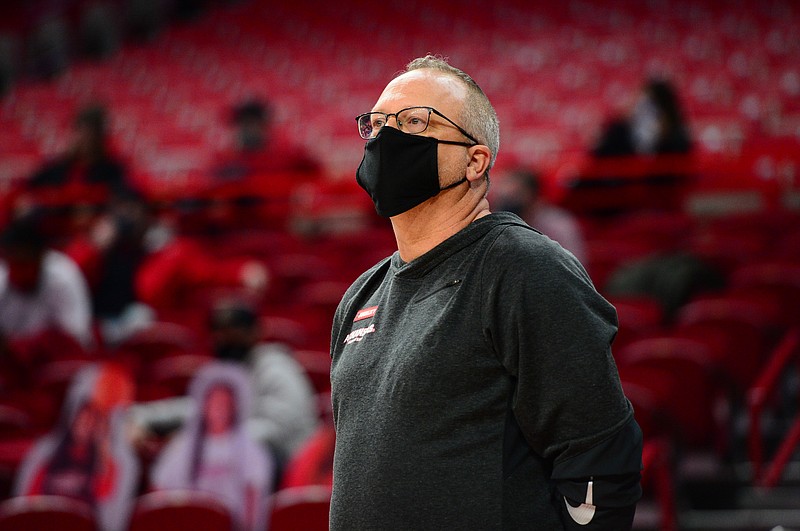 Mike Neighbors looks on during Arkansas' 96-49 win over Oral Roberts on Wednesday, Nov. 25, 2020, at Bud Walton Arena in Fayetteville.

FAYETTEVILLE — Count University of Arkansas women’s basketball Coach Mike Neighbors as a fan of the NCAA’s plan to possibly play the NCAA Women’s Tournament all in the San Antonio area.

“I’m hopeful that is what they decide on,” Neighbors said. “It’s one of my favorite, top five cities in the country. It’s (Razorbacks guard) Amber Ramirez’s home.”

It was announced earlier this week that the NCAA was already in talks with San Antonio city officials to hold the entire event in that one geographic area. San Antonio was already set to host the women’s Final Four this season.

It was made to help mitigate the risks of covid-19 and matches that of the men’s tournament, which the NCAA said last month will be played in a single area — most likely Indianapolis.

“I think it’s smart,” Neighbors said. “Limiting environments has been a huge part of what we do. And I don’t know where we’re going to be at that point and time with the vaccine.

“That’s still two or three months away. But there’s so much planning that goes into an event like that. You pretty much have to start right now.”

The area has plenty to offer aside from basketball, Neighbors said.

“If we would be fortunate enough to be invited, it would be a great place to visit for our kids,” Neighbors added. “There’s a lot tradition-rich areas down there as well as being warm that time of year.”

The first two rounds of the women’s tournament have been played at campus sites the past few seasons, with the top four seeds in each region hosting. The regionals were slated to be played this season in Albany, N.Y.; Austin, Texas; Cincinnati and Spokane, Wash.

The NCAA expects the tournament to be played in late March and early April as usual, though there is a chance the time frame could be shorter.

Arkansas was in a position to likely earn a tournament berth last season for the first time since 2015. But both the men’s and women’s tournaments were canceled because of the pandemic.

The Razorbacks (7-1), who will play Arkansas-Little Rock on Saturday afternoon in Little Rock, climbed to No. 12 in both the Associated Press and coaches polls this week. That could put them in a position to possibly host the first two rounds under the usual system.

But Neighbors said if his team is in that position later this season, he will focus on positives.

“Our fans have worked to build us a home-court environment,” Neighbors said. “But if we play well enough to have earned one of those, I like our chances of being able to do it again in the future.

“But there will be no disappointment whatsoever if there’s anything that resembles an NCAA Tournament this year.”