State of the Hogs: Team Daly among favorites at PNC 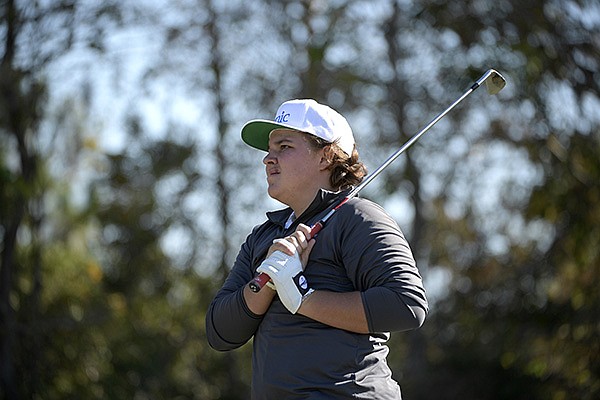 Little John Daly watches after hitting his tee shot on the eighth hole during the first round of the Father Son Challenge golf tournament Saturday, Dec. 7, 2019, in Orlando, Fla. (AP Photo/Phelan M. Ebenhack)

There’s lots of compelling football to watch Saturday as league championships are decided, but forgive me for starting my winter golf viewing a little early.

My favorite PGA Tour tournaments are the primetime events in Hawaii starting in January, but there is fun golf this weekend in the PNC Championship, formerly the Father-Son Championship.

NBC and the Golf Channel got lucky this year when Tiger Woods entered with his 11-year-old son Charlie. Tiger always moves the needle.

But so does John Daly, and Razorback Nation can pull for a team that has a legitimate chance at the title. Little John Daly, signed by Arkansas golf coach Brad McMakin in November, has grown up and the Daly team is the sixth choice in betting lines.

The favorite is Justin Thomas, playing with his father Mike, a 60-year-old club teaching pro. Tiger and Charlie Woods are the second choice in betting lines.

McMakin reminds that John and LJ have contended in the past and that his newest Razorback is a much different player than he was at this time last year.

Part of the attraction is more than the golf. John and LJ have hinted that their usual “Loud Mouth” attire will have a Razorback twist.

“I talked to LJ and he said, ‘Watch for the shorts,’” McMakin said. “I’m guessing the shorts will be good.”

Little John’s recruitment had some interesting twists. McMakin and LJ’s dad both wanted to make sure that it was the right fit despite an intense desire to be a Razorback.

“John and I both talked a lot about this,” McMakin said. “We both wanted to make sure that he was an SEC-type player. We knew it was the only place he wanted to be, but just didn’t want to take him to take him.”

Everything changed last summer when Little John finished second at the Dye National Junior at Carmel, Ind. The tournament was played at Crooked Stick, where John won the 1991 PGA Championship.

“That was an elite tournament,” McMakin said. “It’s a long course, with rough. That was an eye opener.”

The younger Daly had won some lesser events.

“We’d been following him, for sure,” McMakin said. “After that, we knew it was time to get serious and recruit him.

“He just continued to get better through the summer. It’s super exciting to see that, just the way he blossomed. He’s going to be a really, really good player on what I think will be a good team.”

Arkansas junior Julian Perrico, one of the nation’s top players, had been prodding McMakin to recruit LJ all along. They were teammates at Monteverde Academy in Clearwater, Fla.

“Julian said LJ had the length and was a good putter,” McMakin said. “They were good friends. Julian said all he had was Razorback gear.

“We knew he’d come here, but John told us that it would be good for LJ to earn the right to come here. He did. He just keeps getting better. As they say, he is trending up.

“We had mature phone conversations with LJ. He understood exactly what we were talking about and he agreed.”

The tough part was that is exactly what they were, phone conversations. Covid-19 recruiting restrictions prevented McMakin from seeing the explosion on the junior circuit this summer.

“But I know what he can do,” McMakin said. “He’s long. I played against his daddy in college and LJ isn’t longer than everybody else like his daddy. But he’s plenty long.

“Length is important. He’s not crazy long, but he’s got (club head) speed and distance that transfers to the college game. He’s got the length of a normal college player.

“One of the problems you have in evaluating junior players is that sometimes the courses are not real long and they are easy. They get to college and they don’t have the distance to compete. LJ has that.”

And, he’s got the intangibles.

“He’s got a lot of what his daddy had, really good touch around the greens and he’s a good putter,” McMakin said. “LJ has moxie. He’s tough, too. His dad had real toughness. You don’t win two majors and not have toughness.”

John needs that toughness now. He’s recovering from surgery for bladder cancer. The Daly team will be the sentimental choice in Orlando because of that.

“John is doing well,” McMakin said. “He thinks he’s going to beat it.”

LJ could have gone a lot of places besides Arkansas. He attracted the top Florida golf schools with solid junior play last summer. He earned Rolex Junior All-America status on the way to a top 40 ranking.

“It’s pretty neat how he loves the Razorbacks,” McMakin said. “So does his dad. I’ve been here 14 years and there have only been about three that I could say were Razorbacks before they got here like LJ.

“Taylor Moore was like that. His dad played for Norm DeBriyn and his mom was a cheerleader. Taylor still keeps up with all things Razorbacks.”

There will be some Razorbacks to keep up with on the national stage this weekend.