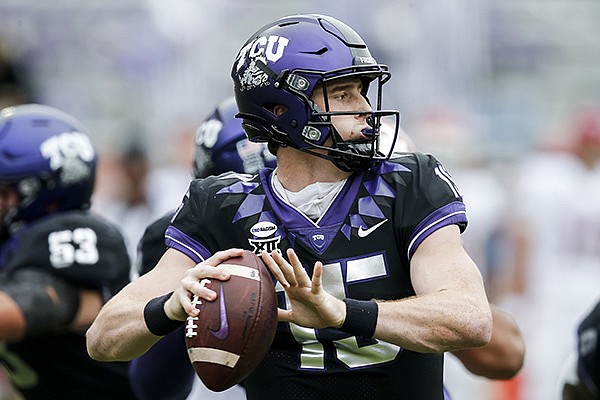 That will especially be true when the Razorbacks face TCU in the Texas Bowl on Dec. 31. The old SWC rivals will meet for the 71st time, but for the first time in a postseason game.

It will be Arkansas’ 30th game against a former SWC opponent since leaving for the SEC following the 1991 season. The Razorbacks are 2-0 in bowl games against old SWC teams, with victories over Texas in the 2000 Cotton Bowl and 2014 Texas Bowl.

Arkansas and TCU have met recently, completing a long-awaited home-and-home nonconference series in 2016 and 2017. The road team won each game — the Razorbacks 41-38 in double overtime in 2016 and the Horned Frogs 28-7 the following year in Fayetteville.

Much has changed since that time, though. Arkansas has fired two head coaches, while TCU uncharacteristically stumbled to a losing record (5-7) and missed a bowl game last season.

TCU is 6-4 this year, including its first winning Big 12 record (5-4) since 2017. The Horned Frogs have notable victories over Texas and Oklahoma State this season, and lost to the Big 12’s top two teams, Oklahoma and Iowa State in Fort Worth.

Here are five more things to know about TCU and this year's Texas Bowl:

The Horned Frogs have been good in the area where the Razorbacks have struggled all year.

Davis is fifth nationally with a 14.5-yard punt return average. He had touchdown returns of 67 yards against Baylor and 37 yards against Kansas. He also returned a punt for a touchdown as a freshman two years ago.

The Razorbacks allowed an 84-yard punt return touchdown to Alabama’s Smith in their last game, but had been solid in punt defense most of the season. Prior to Smith’s return, Arkansas had not allowed a punt return over 10 yards in its previous six games.

Kicker Griffin Kell was named Lou Groza Award star of the week after he made four field goals at Texas. Kell is 11 of 16 on field goals this season.

Punter Jordy Sandy, a 27-year-old sophomore from Australia, was named second-team all-conference. Sandy has had 10 punts downed inside the 10-yard line.

Freshman Savion Williams, who backed out of a verbal commitment to Arkansas following the coaching change last year, leads TCU with 22.3 yards per kickoff return.

TCU has consistently fielded one of the best defenses in the offensive-dominated Big 12, and that has been the case this season.

The Horned Frogs are allowing 350.9 yards per game, which ranks 32nd nationally and fourth in the Big 12. TCU has forced 15 turnovers, three of which the Horned Frogs returned for a touchdown.

TCU ranks 10th nationally with an average of eight tackles for loss per game, including 2.7 sacks. The Horned Frogs have 22 sacks in their past six games after recording five in their first four games.

Ochaun Mathis leads TCU with nine sacks and his 0.9 per-game average ranks 11th nationally. Mathis has 14 total tackles for loss this season, one behind freshman defensive end Khari Coleman for the team lead.

Sophomore quarterback Max Duggan is TCU’s leading rusher this season with 526 yards and 10 touchdowns on 116 attempts.

When adjusted for sacks, Duggan has rushed for 652 yards on 97 attempts for an average of 6.7 yards per carry.

Duggan has led TCU in rushing three times this season — victories over Texas, Texas Tech and Oklahoma State. Duggan has rushed for more than 100 yards twice, including 154 yards and three touchdowns against Texas Tech.

After mostly sharp outings in the first half of the season, Duggan’s passing production has tailed off during the second half of the season. In his past five games Duggan has completed 52 of 102 passes for 755 yards, 5 touchdowns and 3 interceptions. Over the same time he has rushed for seven touchdowns.

Freshman Quentin Johnston has been Duggan’s top receiver this season with 22 receptions for 487 yards and 2 touchdowns. Johnston's 22.1-yard per reception average is fifth nationally.

Gary Patterson is in his 20th season as TCU’s head coach. Among active FBS coaches, only Iowa’s Kirk Ferentz (22 seasons) has been in charge for longer at one program.

Patterson has a 177-74 record at TCU and has overseen the Horned Frogs’ ascent from a national afterthought to a team that has competed on the national stage at various times throughout his tenure. The Horned Frogs have won a combined six conference championships in three separate conferences under Patterson and have competed in bowl games affiliated with both the BCS and College Football Playoff, including victories in the Rose and Peach bowls.

The Texas Bowl against Arkansas will be TCU’s 18th bowl game under Patterson. The Horned Frogs had been to 17 bowls in program history prior to Patterson succeeding Dennis Franchione at the end of the 2000 season.

Patterson has had success retaining assistant coaches, notably coordinators. Chad Glasgow has been on Patterson’s staff for 19 seasons, including the past nine as defensive coordinator. Offensive coordinator Sonny Cumbie is in his eighth season.

Patterson is in his 23rd season overall at TCU. He was the Horned Frogs’ defensive coordinator from 1998-2000.

Attendance for this year’s Texas Bowl will be capped at 13,300, according to information listed on the bowl’s website.

That total is roughly 18% of the listed capacity of 72,220 at NRG Stadium, which is home to the NFL’s Houston Texans.

Unlike most years, no tickets will be sold by the participating schools. All tickets must be purchased through the Texas Bowl or a third-party vendor.

All attendees who are 10 years or older will be required to wear face coverings during the game, except for when eating or drinking. Fans are asked to take their temperature before attending the game and are encouraged not to attend if within 14 days they have experienced covid-19 symptoms or been in close contact with someone who has tested positive for the virus.