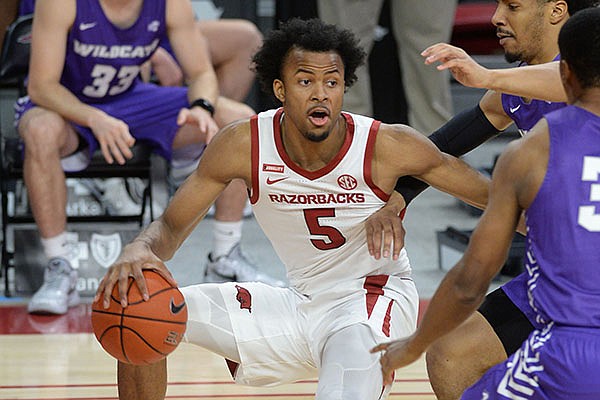 Arkansas guard Moses Moody is double teamed during a game against Abilene Christian on Tuesday, Dec. 22, 2020, in Fayetteville.

FAYETTEVILLE — Having been away from home for nearly three years now, Arkansas freshman Moses Moody is mature and never lets much affect him on the court.

It was no different Tuesday when Arkansas coach Eric Musselman was sent home due to covid-19 contact tracing and associate head coach David Patrick took his place for the Razorbacks' game against Abilene Christian.

Moody, a North Little native who spent his final two high school seasons at Montverde (Fla.) Academy, had a team-high 21 points and unbeaten Arkansas fended off the pesky Wildcats for an 85-72 victory in its last game before SEC play begins at Auburn next Wednesday.

“I think he definitely stepped up,” Moody said of Patrick. “That is something that Coach (Musselman) always talks about — when one man goes down, another steps up. The coaching staff is a team and we had to protect our undefeated season so far without Coach.”

Coverage from Arkansas' win over ACU

Moody is averaging a team-leading 16.9 points and 5.6 rebounds per game this season in a team-high 29.6 minutes per game.

Arkansas had started slow in recent wins over Central Arkansas and Oral Roberts, but led ACU 11-1 and 40-19 in the first half.

The Wildcats, who are coming off back-to-back 20-win seasons, return four starters from last season’s team and are picked second in the Southland Conference behind Stephen F. Austin, which was 30-4 last season with a win at Duke.

"It was good to definitely jump on them early,” Moody said. “Coach had been letting us know how good of a team they are, played Texas Tech really well and that was the only loss of the season so far. So we just anticipated a good game and we definitely had to come out from the jump.”

Abilene Christian entered the game forcing 24 turnovers. The Wildcats forced Arkansas into up with 13, eight of which were on charge calls.

“Yes, it was definitely an emphasis, but 13 is too many,” Moody said. “We planned on having less than nine so we didn’t reach that goal. So we are not necessarily going to call it a win in that aspect. That is something we stressed all week.”

JD Notae had 17 of his 19 points in the second half while Desi Sills had 16 of his 18 before intermission.

Sills had seven of Arkansas’ first nine points as he attacked the basket, but was limited later due to foul trouble.

“He came out aggressive, he was hitting shots, getting to the cup,” Moody said of Sills. “Desi does more than just shoot the ball. He can get into the lane, get us a lot of (free throw attempts), so he's going to get to the line and draw the defense and kick out and create. He can do it all. His stat line doesn't just stop with scoring.”

Notae is impressed with calmness on the court of Moody, who is hitting 51.2% from the field, 41.3% from 3-point range and 79.1% from the free throw line so far this season.

“Very poised,” Notae said. “He's probably one of the best shooters in the country to me. I've seen it with my own eyes. Him just being shot ready, or him just even rebounding the ball. And he can defend. He's a really good young player.”

While Moody is leading Arkansas in minutes played (235) this season, the Razorbacks’ other three freshmen have seen limited action. KK Robinson, Jaylin Williams and Davonte “Devo” Davis all have under 85 minutes. Davis and Williams have not played in two games apiece.

All three can be seen after games getting extra shots.

“They're very mature,” Moody said. “They’re very disciplined, so they're just staying in the gym and working on their craft just knowing they'll all be ready when their name is called, that they'll come out and be productive. They're just ready at all times.”

The game offered Moody — who began his high school career at Little Rock Parkview — a chance to play against former Parkview star Airion Simmons, who had 9 points and 5 rebounds in 18 minutes.

"He’s undersized, but he’s one of the toughest kids in our program,” Golding said. “He might make a lot of money one day in the NFL as a defensive tackle or defensive end or something. He’s been a heck of a basketball player for us. We’ve extremely fortunate to have him.

"The first half he was obviously a little fired up. He’s played AAU basketball with a lot of those guys....I thought the second half he settled down. I was excited that he got to come home and played well.”

It was probably not the last time Moody will see Simmons this week.

“Big Airion (Simmons), that's my guy,” Moody said. “We grew up going to middle school together and high school. We were out there on the court talking. We're competing at the same time. No friends on the floor, but after the game we talked. And we're all going home to the city, so I'm probably going to see him tomorrow.”

Moody is happy about the chance to see his family over Christmas, although the Razorbacks will have to be back Friday night for practice.

"It's good,” Moody said. “Being away from fam, that's nothing new to me. I was at Montverde for two years, and last year I didn't even get a break for Christmas. This is great being able to go back and see my people and all. Very thankful.”

That being said, Moody knows that he and his teammates must be mindful of coronavirus.

“We definitely have to be careful,” Moody said. “I'm going to take the necessary precautions and be around the people that I have to and continue to be socially distanced and be responsible knowing we're different. We're not like everybody else. We have to sacrifice for the greater goal, and we just can't let our guard down now going into SEC play.”

Arkansas will next take the court at Auburn (6-2), which won its fifth straight game with a 67-53 home win over Appalachian State on Tuesday. The Tigers should be the Razorbacks' biggest test yet.

“I think Arkansas is a top 25 team in the country,” Golding said. “I think they have a really, really good team and I think they’re going to have a great year.”