UNDER THE RADAR: Bentonville’s Jaylen Lee 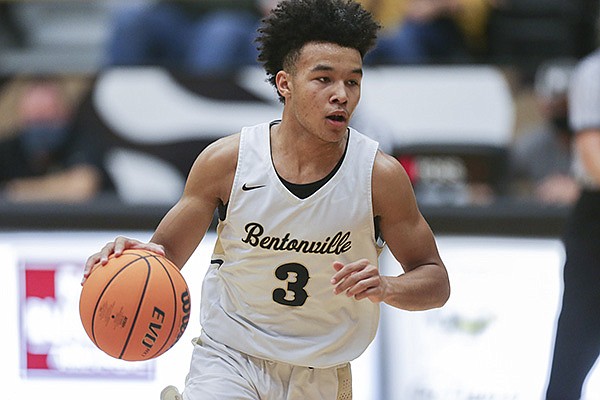 Bentonville guard Jaylen Lee (3) dribbles the ball during a game against Little Rock Central on Saturday, Nov. 14, 2020, in Bentonville.

On Wednesdays, we feature an in-state prospect who could be flying under the radar of college coaches. This week's UTR prospect is Bentonville’s Jaylen Lee.

“I’ve been blessed to coach some really good players, but he sees the floor as well as anybody I’ve coached. His vision is really unique and impressive.”

“He came in and played as a freshman in the middle of January. It gave him an opportunity to play and he ended up being one of our best players down the stretch. I think he had 18 points against Conway in the first round of the state tournament. We led the entire game until the end and Conway won by two and we all know they went on and were co-state champions with Little Rock Central.

“He’s really a great ball handler. Doesn’t get rattled. He’s pretty smooth, even tempered. He’s playing with a lot of confidence right now and really focusing on making his teammates better. He’s done a heck of a job doing that early on in the season for us.”

“We need him shooting more. We has to be a little more aggressive but he has some weapons around him that he’s setting guys up and it’s been really good for us so far this year.

“The last couple games all of our seniors have been quarantined. So we’ve been playing without any senior leadership and Jay’s on the floor leadership the last couple of games especially at Russellville has been tremendous. I’m probably most proud of that from him because he’s a quiet young man.”