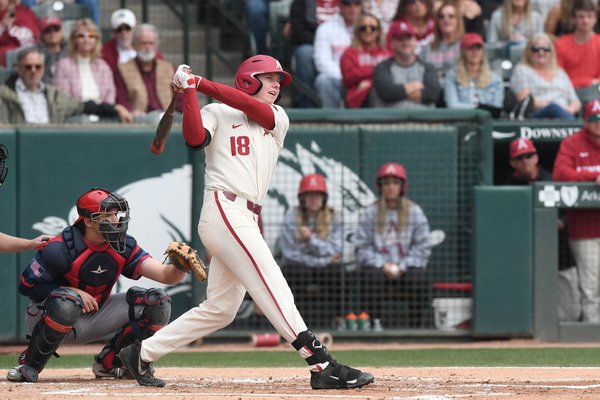 Arkansas' Heston Kjerstad gets a hit against South Alabama Sunday March 8, 2020 at Baum-Walker Stadium in Fayetteville. The Razorbacks won 5-3 and are back at home to take on Grand Canyon University Tuesday at 6:30 P.M.

The finally tally on Heston Kjerstad’s monster 2020 season will never be known.

Kjerstad, the junior outfielder for the University of Arkansas, was hitting .448 with 6 home runs and 20 RBI through March 11, the final game of the season before the coronavirus shutdown.

The Baltimore Orioles bet big on Kjerstad’s future, making him the No. 2 pick in the Major League Baseball Draft. That made the always smiling, unassuming native of Amarillo, Texas, the second-highest drafted Hog ever behind No. 1 pick Jeff King.

“We are very excited in particular about Heston’s role in our organization’s future and what we feel is ultimately going to be his place in the middle of our lineup one day,” Baltimore General Manager Mike Elias said. “What we saw that led us to select Heston with this pick was a rare combination of power and the ability to hit for average, and what we feel is a swing and approach that will convert that production to the professional game and ultimately to the major leagues.”

Arkansas Coach Dave Van Horn saw the potential in Kjerstad when he was a gangly 5-10 high-schooler, who added 5 inches and some muscle to his teenage frame.

“I changed a lot just because I wasn’t done growing and maturing,” Kjerstad said. “Van Horn originally … saw me as a leadoff hitter, hit for average and maybe a little power.

“But I grew, put on some weight and ended up 6-3 and 200 pounds. I definitely grew as my power came and then settled in to the corner outfield”

“What attracted me to Heston initially was just his ability and his knack for squaring up a baseball routinely,” Guthrie said. “He can do damage with pitcher’s pitches.”

Kjerstad was a cornerstone on the Razorbacks 2018 and 2019 teams, the first back-to-back College World Series teams in Arkansas history.