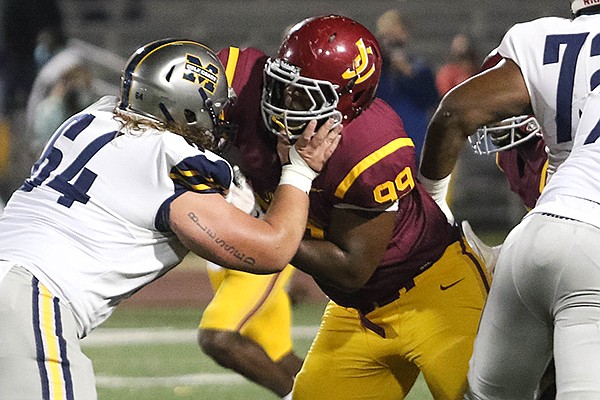 FAYETTEVILLE — New Arkansas defensive tackle signee Jalen Williams of Jones (Miss.) College took a gamble on himself and it paid off.

Williams (6-3, 310 pounds), the top junior college defensive tackle and sixth-best JUCO prospect overall according to ESPN, chose to take the junior college route in a quest to get better offers than he had coming out of Tylertown (Miss.) High School

What once was a lone offer from Colorado out of high school turned into offers from Arkansas, Auburn, Georgia, Ole Miss, Missouri, Florida State, Baylor, Duke, Minnesota, Southern Mississippi and others during his time at Jones.

“He has a great belief in himself and made that decision that he could come here to Jones and get bigger, stronger and develop into someone who a lot of of Division I schools would love to have in their program,” Jones coach Steve Buckley said. “That’s exactly what happened and I couldn’t be prouder of what he has accomplished on the field and in the classroom.”

Williams had 58 tackles, 6.5 tackles for loss and a pair of sacks in his two years at Jones. Williams' team played just a five-game schedule this season due to covid-19.

“If you talk about athletic development, Jalen has gone from a 252-pound kid in high school to a 305-pound defensive tackle that played at a high level this past year,” Buckley said. “It was interesting to watch him develop and carry his weight. I think his freshman year he had gained so much weight that it took him a semester to get used to playing at 300 pounds.

“He is an extremely hard worker, great kid, does a great job in the classroom. Jalen was a qualifier out of high school and is going to graduate from Jones with over a 3.5 GPA. He handles business off the field in the classroom. I think he is going to be a really, really good player for Arkansas.”

Williams had 111 tackles, 20 tackles for loss and 13 quarterback hurries as a senior at Tylertown.

Buckley is pleased that Williams — whose dad Jason played basketball for Ole Miss from 1994-96 — will be in a program with Arkansas coach Sam Pittman and defensive line coach Derrick LeBlanc.

“You look at what Coach Pittman has done there and it has been great,” Buckley said. “I’ve never met him, but I have known about him for a long time and his background. I have heard nothing but great things about him as a a person and that is important to me that my kids are going to be taken care of by character men, and I think Coach Pittman is that.

“I have also had a long-standing relationship with Derrick LeBlanc, the defensive line coach there. Derrick and I worked together at Southern Miss for a couple of years. So I thought it was just a great fit for Jalen. I know who is coaching him and I know the kind of person Derrick is and Coach Pittman is. I just think it is going to be a great fit.”

Buckley wasn’t sure that Jones was going to get to play a season due to coronavirus.

“Going into the season we didn’t know how many games we would play and the bottom line was we fought hard to play in Mississippi,” Buckley said. “The NJCAA made a determination that we would not play until the spring, but we did not think it would be fair to our kids getting recruited to make them come back and play in the spring.”

Jones was poised to have a big season before the virus hit, Buckley said.

“It was crazy,” Buckley said. “I felt like going into the season that this was going to be our best team. I have been here four years so it would be our fifth season. But then covid hit and I had a lot of kids on my roster that were qualifiers and we ended losing five kids in the summer.

“One went to Louisville, one went to North Carolina State, one kid went to Mississippi State and so on."

Williams could have left as well, but chose to stay.

“Jalen was one of the kids that also had Power 5 offers to leave, but he just wanted to stay and continue his developmental process,” Buckley said. “We actually tried to talk him into leaving, not because we didn’t want him, but kids don’t lay in bed at night and dream of going to junior college, and I get that.

“My background is Division I and I know these kids come here to get to the next level. Jalen had opportunities, but wanted to finish up what he had started here. I think it is a testament to him.”

Williams will have four years to play three seasons at Arkansas.

“At one time I was thinking about leaving Jalen on scholarship and not burning a year of eligibility," Buckley said, "but when the NJCAA granted the free year like Division I did, he and I and his family made that decision to go ahead and play.”

Buckley believes the Mississippi junior college slate has helped Williams in his development.

“I didn’t know how good this league was until I got in it,” Buckley said. “I had recruited it forever, but you truly don’t pay that much attention to the overall league when you are recruiting certain kids.

“But just to look at our league and the competition in our league; we have had 95 kids sign scholarships in the past four years."

Buckley also believes Jones is a place that did the same.

“We graduate 97% of our football team at December after three semesters,” Buckley said. “We just have a great set up at Jones from an academic standpoint and from an athletic development one. I am probably one of the few junior college coaches that has a strength coach.

“The level of competition that these kids go against every day in practice and in the games, it just helps them get ready for the next step.”