Loyd Phillips, who won Outland Trophy with Razorbacks, dies at 75 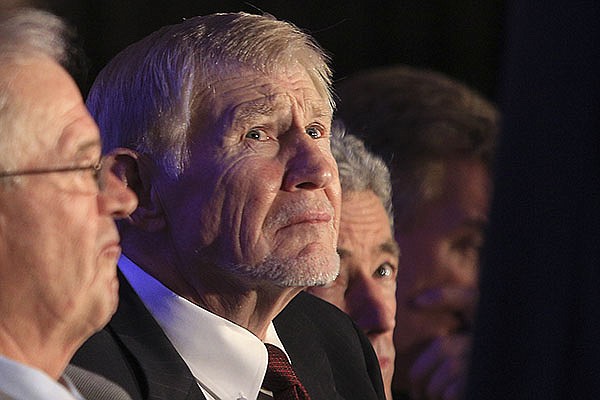 But Phillips said returning to the University of Arkansas after his NFL career was cut short by a leg injury and earning his bachelor’s and master’s degrees was more significant than anything he did on the football field.

“I’m proud of what I did as a football player,” Phillips said in 1983. “But that doesn’t mean nearly as much to me as graduating and getting my master’s.”

Phillips, who became an administrator for the Springdale and Rogers school districts, died Sunday from complications related to a stroke. He was 75.

Phillips was a three-year All-Southwest Conference pick from 1964-66 and starred on Arkansas teams that were a combined 29-3 — including three victories over Texas.

After Phillips helped the Razorbacks go 11-0 and win a share of the national championship in 1964, he became Arkansas’ first two-time consensus All-American in 1965-66. He had 304 career tackles.

“Loyd was just such a great, great player,” said Ken Hatfield, the former Arkansas defensive back and coach who was a senior for the 1964 Razorbacks. “So quick with his hands, so strong, so fast.”

Phillips and Hatfield remained close friends over the years.

“We were in a Bible study together the last three years and Loyd never missed it,” Hatfield said. “I just appreciated his friendship. He was fun to be around.”

Phillips, who came to Arkansas from Longview, Texas, was the Razorbacks’ second Outland Trophy winner after Bud Brooks won it in 1954.

“Loyd didn’t have any technique that I know of, except no blocker could handle him,” Frank Broyles, who was Phillips’ coach at Arkansas, said in 1994. “He ignored the blocker, chased the ball and always arrived in a bad humor.”

When Phillips was voted to Arkansas’ All-Century Team in 1994, he said few if any of the students he worked with knew about his football career.

“I like it that way,” said Phillips, an assistant principal at the time. “I want them to respect me as an educator, not as someone who played football a long time ago.”

Phillips was supportive of the Razorbacks and often attended UA functions, but he seldom spoke of his exploits as a player.

“He has a great deal of humility,” Terry Don Phillips, a former Arkansas player and administrator, said of his older brother in 1994. “You could be with him in a room from now until forever, and you would never know he was a great football player. He won’t talk about it unless someone else brings it up.”

Broyles said despite Phillips’ success as a player, he preferred to remain in the background.

“You’d have to break his arm to get him to make a speech,” Broyles said. “He’s very shy. But he didn’t play that way.”

Terry Don Phillips, who in 1966 played defensive tackle alongside his brother, said opponents naturally ran at him.

“I was the weak link, but it actually was a mistake to run my way because Loyd Wade was such a great player in pursuit,” he said. “I don’t believe I’ve ever been around anybody as intense as he was. There just wasn’t any quit in him.”

The Chicago Bears made Phillips their first-round pick — No. 10 overall — in the 1967 NFL Draft.

Phillips, 6-3 and 220 pounds, figured he would play middle linebacker in the NFL, but that position was filled in Chicago by Dick Butkus. So Phillips played defensive end.

“I was probably the smallest defensive lineman in the NFL,” Phillips said. “I knew I was kind of small when [Minnesota Vikings quarterback] Joe Kapp was bigger than me.”

Phillips played in 32 games in three years with the Bears, including 21 starts, before a right leg injury he suffered as a rookie eventually led him to retire before the 1970 season after he had been traded to the New Orleans Saints.

“I knew that it was coming to an end before anybody else, and I couldn’t hardly come to grips with that,” Phillips said in 1983 of his football career. “You think you’re going to play forever.”

Phillips returned to Arkansas, where as a player he admitted that he did the minimum required to maintain his academic eligibility.

“I had good intentions about going to class when I got up in the morning, but I got sidetracked real easy,” Phillips said in 1994. “I was immature in a lot of ways.”

Given a second shot at college, Phillips got serious about his education.

“When Loyd came back, I called him in and told him I wanted to help with his finances to get his bachelor’s degree,” Broyles said. “And he said, ‘At the end of the semester I’ll bring you my grades, and if you think I warrant it, you can help me.’

“When he brought me his grades, they were all A’s. I said, ‘You dirty so-and-so, you worried me for four years about being eligible, and you could have made A’s the whole time.’ It just goes to show you how much attitude means.”

Phillips became an honors student, earned his bachelor’s and master’s degrees in education and administration and passed 30 hours toward a doctorate degree.

“When Loyd played here, people sort of looked at him as a dumb jock, and he worked hard to maintain that image,” Terry Don Phillips said. “But he certainly wasn’t dumb.

“When he got hurt and had to quit playing football, he pretty much swallowed his pride and decided to apply himself in school and really did well. Obviously, he studied a lot, because he had a lot of ground to make up.”

Betsy Phillips said her husband went about college the second time around with the same passion and determination that he played football.

“He found his niche working with children,” she said in 1983. “He loved being able to do that.”

Hatfield said becoming an educator was a natural fit for Phillips.

“I think of the hundreds and hundreds of kids that he’s had an influence on,” Hatfield said. “So many of them he could relate to, because he’d been where they were at that point. He made such a difference and set a lot kids’ lives on the right path.”

In addition to his wife, Phillips is survived by his son Mackenzie — who also played football for the Razorbacks — and daughter JoAnn.

“The Razorback Family and college football has lost one of its true legends,” Arkansas Athletic Director Hunter Yurachek said in a news release. “Loyd Phillips was a ferocious competitor for Coach Frank Broyles in what was a truly golden era of Razorback Football.

“As his accomplishments attest, he established himself among the best to ever play college football. However, away from the field, Loyd was a humble gentle giant who made a meaningful difference in the lives of generations of young people in our state through his dedicated service in secondary education. He will be greatly missed.”

Phillips said Oklahoma recruited him the hardest, but Arkansas always was his top choice.

“Arkansas could have saved some steaks,” Phillips said in 1983. “From the start, that’s where I wanted to go.

“I started watching the Razorbacks when I was in high school, and I liked the way they played. They weren’t that big, but they were always aggressive.”

Phillips retired from the NFL when he left the Saints’ training camp in the summer of 1970.

“I wanted more out of life, I just didn’t know what it was,” Phillips said in 1983. “That was a point in my life when I had to decide which way I was going.

“I think I could have hobbled through that season, maybe a couple more. But I don’t think I ever would have gone back to school if I hadn’t left camp.

“That was hard to do, especially when you’ve been playing football all your life. I questioned for a long time if I made the right decision.