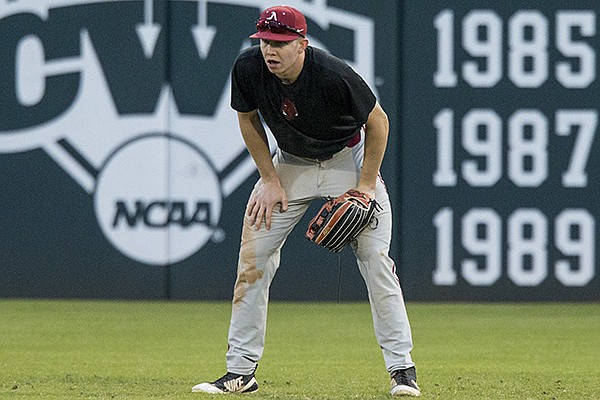 Arkansas sophomore Heston Kjerstad plays in the outfield during a scrimmage Thursday, Oct. 18, 2018, in Fayetteville.

FAYETTEVILLE — Through five preseason scrimmages, one thing is becoming clear about the 2020 Razorbacks.

There is not an easy out in the Arkansas lineup, and that extends beyond the projected starters.

That isn’t to say that hitters won’t go through slumps or have production that is less than desired. But the Razorback hitters make pitchers work for their outs by hunting pitches, and in the process have the capability of running up a pitch count fairly quickly.

Such was the case early in Saturday’s scrimmage at Baum-Walker Stadium, which ended with a 4-4 tie after six innings.

The scrimmage’s two most impressive at-bats came during the first inning. Each ended with a two-run home run against a veteran pitcher - first by Heston Kjerstad against Kole Ramage, then by Cole Austin against Kevin Kopps.

Kjerstad fouled off five consecutive pitches before hitting a line drive into the opposite-field bullpen in left. It was Kjerstad’s third homer of the preseason scrimmages and scored Christian Franklin, who reached on a fielder’s choice one at-bat earlier.

In the bottom of the inning Austin had his own prolonged at-bat, fouling off four consecutive pitches by Kopps before drilling the seventh pitch of the at-bat over the 375-foot marker in left-center field. His homer also scored Jacob Nesbit, who reached with a single between shortstop and third base.

Casey Martin followed with his own good at-bat. After fouling off three pitches, Martin hit one toward the line in left, but Braydon Webb dove for an inning-ending catch that was the day’s defensive highlight. It was a similar play to the one Webb made in a fall scrimmage that resulted in a hairline fracture in his shoulder.

Casey Opitz had another grind-it-out at-bat in the third inning. He fouled off three pitches from Ramage before doubling to left with a hit to the base of the wall.

Kopps allowed a second home run to Zack Gregory in the second inning. Gregory’s hit went off the video board in right-center field and was his second homer in as many days.

Relief pitcher Miller Pleimann might have been the day’s best pitcher with a 1 ⅔-inning stint that included 4 strikeouts. Pleimann, a sophomore right hander from Fayetteville who transferred from Wichita State, is not eligible to play this year.

Freshman right hander Peyton Pallette worked around some trouble to record 1 ⅔ scoreless innings. Pallette inherited two runners in scoring position from Caden Monke with one out in the fifth inning. Franklin hit a line drive that ricocheted off Pallette’s glove to score Cason Tollett from third base.

After Franklin advanced on catcher Dominic Tamez’ second passed ball of the inning, Pallette walked Kjerstad to load the bases with one out, but he got out of the jam by striking out Opitz and getting Robert Moore to hit into a force out at second base.

Pallette retired the first two batters he faced in the sixth before giving up a single to Webb and issuing Franklin’s second walk. Kjerstad made good contact on a couple of pitches, but flied out to the warning track in right field to strand two.

Monke, a sophomore left hander who impressed in the fall, labored for the second straight outing, allowing 2 runs on 3 hits and a walk in 1 inning. He struck out Moore to strand two in the fourth inning.

Kjerstad was the day’s top hitter with a 2-for-4 performance that included a walk and 3 RBI on the home run and a double. Both of his outs were on deep fly balls to the warning track.

Some other notes from Saturday’s scrimmage:

• If Webb’s diving catch in left field was the day’s defensive highlight, Pierce’s play from third base to throw out Nesbit was not far behind. In the at-bat following Gregory’s home run, Pierce made a diving stop on a grounder to his left, jumped to his feet and made the throw for the final out of the inning.

• A third defensive highlight was a 4-6-3 double play that Martin hit into to end the third. Moore, playing shortstop, gloved the ball off a hop moving to his right. He threw against his body to Cullen Smith at second base for the first out, and Smith made a strong throw to beat the speedy Martin at first base.

• Freshman outfielder Bryce Matthews did not play in Saturday’s scrimmage after suffering a strain in his right arm during the pregame. Matthews had an ice pack on his right elbow in the dugout.

• With Matthews out, Gregory played in left field. Gregory has been practicing mostly at second base.

• Pierce and Curtis Washington each had stolen bases. Braydon Webb was caught stealing by Tamez, and Tamez was picked off at first base by Kopps.

• Freshman right hander Nathan Rintz had a rough sequence in the fifth inning. He walked Matt Goodheart to lead off the inning, threw a wild pitch that allowed Goodheart to advance to second, then committed a balk to move Goodheart to third. Rintz rebounded by striking out Austin before giving way to Pleimann, who caught Martin and Tamez looking on consecutive strike threes to strand the base runner.

• Tamez had an up-and-down day behind the plate. He had two passed balls and was also called for interference in Opitz’s fourth-inning at-bat, but he caught Webb stealing in the sixth.