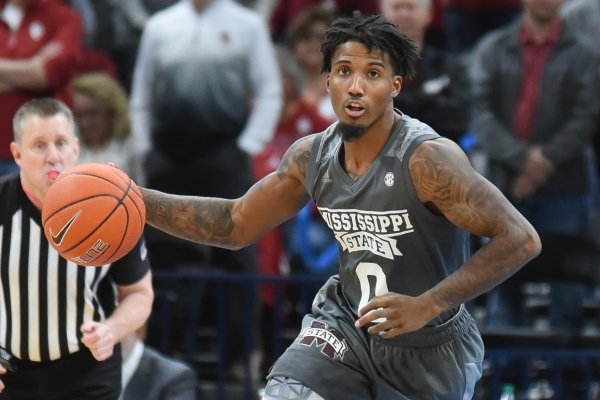 Mississippi State guard Nick Weatherspoon pushes down the court during the second half of an NCAA college basketball game against Oklahoma in Oklahoma City, Saturday, Jan. 25, 2020. (AP Photo/Kyle Phillips)

Coach Ben Howland's Bulldogs have won five SEC games in a row, including an 86-73 victory over Tennessee on Saturday in which they shot 69% in the second half while scoring 58 points.

A one-point road loss at Oklahoma in the Big 12/SEC Challenge on Jan. 25 is Mississippi State's only blemish since falling 60-59 at LSU on Jan. 11.

The challenge level goes up for the Bulldogs this week as they take on Kentucky at Rupp Arena on ESPN tonight at 8.

The Bulldogs opened SEC play with consecutive losses to Auburn (80-68) in Starkville, Miss., at Alabama (90-69) and at LSU. Today Mississippi State is 14-7 overall and 5-3, tied for fourth, in the jumbled SEC race and gaining traction among NCAA Tournament predictors.

USA Today produced its debut NCAA Tournament projections Monday and included six SEC teams. Among them, Mississippi State was included among the last four in the field as a 12 seed in a play-in game versus Arizona State.

USA Today also slotted Auburn and LSU as 4 seeds, Kentucky as a 5, Arkansas as a 7 and Florida as a 10. Additionally, it included the University of Arkansas-Little Rock as a 15 seed projected to play 2 seed Duke.

CBS Sports also recognized Mississippi State with an 11 seed, giving the SEC six teams in its latest projection. The other SEC teams with these seeds include: 5 Auburn, 5 Kentucky, 7 LSU, 8 Arkansas and 11 Florida in a play-in game vs. Rhode Island.

University of Arkansas guard Mason Jones hit the 30-point mark for the fourth time this season, and the second game in a row, in Saturday's 82-78 victory at Alabama. The junior from DeSoto, Texas, leads the SEC in scoring with 19.2 points per game, just ahead of Georgia freshman Anthony Edwards (18.9).

The Razorbacks are 3-1 this season when Jones scores 30 or more points.

Arkansas is 19-10 in conference play when a Razorback scores 30 or more points, including 3-1 this season.

Jimmy Whitt scored 30 points in the Razorbacks' 75-55 victory over Vanderbilt on Jan. 22 prior to Jones' 30-point outburst at Alabama.

The week is loaded with games between some of the SEC's best clubs, starting tonight, when Auburn takes on Arkansas at 6 p.m. at Walton Arena on the SEC Network. Later on ESPN, sizzling Mississippi State plays at Kentucky at 8 p.m.

League-leading LSU will have a challenging end of the week after a game Wednesday at 8 p.m. (SEC Network) at Vanderbilt, which is riding a 27-game SEC regular-season losing streak. The Commodores made it close in a 61-55 home loss to Florida on Saturday, and the Gators nearly upset LSU on the road a couple of weeks ago. The Tigers, who have won 12 consecutive SEC road games, have a Saturday showdown at Auburn. That game will likely go a long way toward determining the SEC regular-season champion.

Kentucky at Tennessee on Saturday at noon (CBS) also features teams in the top half of the SEC standings, though the Vols enter tonight's game at Alabama riding a two-game losing streak.

Jones and the sophomore Perry were co-players of the week, while Edwards was the league's freshman of the week.

The SEC boasts two players who are shooting 90% or better from the free-throw line. Kentucky's Immanuel Quickley leads the way at 91.5%, followed closely by Missouri's Dre Smith (91.3%).

Quickley ranks seventh in the NCAA behind Wofford's Nathan Hoover (95.4%), while Smith is tied for 10th.

The SEC games last Tuesday had showcased one of the wildest nights in league play in years, as no lead was safe at home or on the road.

The night was filled with major comebacks, and none was larger than the 20-point deficit Missouri overcame to trip up Georgia 72-69 at Mizzou Arena. The Tigers finished the game on a 27-8 run to rally from a 59-39 deficit with 13:33 remaining.

Auburn's rally for an 83-82 win at Ole Miss in double overtime last Tuesday was nearly as impressive as Missouri's rally from a 20-point deficit. The Tigers came from 19 back -- a deficit of 39-20 early in the second half -- to stun the Rebels. It was the third-largest comeback in Auburn history.

The wild SEC action also featured Mississippi State's recovery from a 16-point deficit in its 78-71 road win at Florida. The Bulldogs snapped a six-game road losing streak to the Gators, who led 36-20 in the opening half.

The SEC's initiative to strengthen its nonconference scheduling several years back is paying dividends.

The SEC is the only basketball league in which all of its members have played schedules that rank in the top 100 in the nation.

• The SEC has 14 men's basketball players who are competing as graduates this season, among them Arkansas forward Jamario Bell, a fifth-year senior who had four seasons as a Razorback football player.