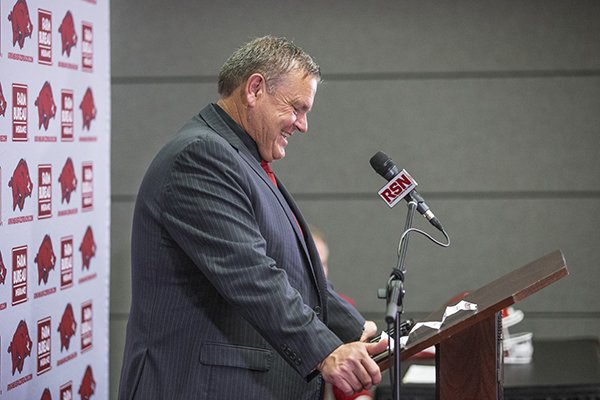 FAYETTEVILLE -- University of Arkansas Coach Sam Pittman likes the look of his first full signing class, which was completed with 12 additions Wednesday on national signing day.

Yet Pittman indicated this first class, attracted by he and his staff in less than two months, is merely a prelude for big Razorback hauls to come.

The Razorbacks' haul -- filled mostly with three-star talent and highlighted by four-star signees in dual-threat quarterback Malik Hornsby and offensive lineman Marcus Henderson of Memphis on Wednesday -- surged to No. 30 in the 247Sports.com composite rankings.

[Video not showing up above? Click here to watch » https://www.youtube.com/watch?v=ytLpbrv7akY]

That's not bad considering where Arkansas football was when the new staff arrived. Arkansas' class -- on the heels of back-to-back 2-10 seasons and the firing of coach Chad Morris with two games remaining -- was ranked 118th when Pittman took over in December.

Hornsby, Henderson and offensive lineman Jalen St. John of St. Louis were huge pickups for the Hogs on Wednesday. St. John, a Missouri pledge in early December, opened up his recruitment after the Tigers fired head coach Barry Odom, who swiftly joined Pittman as Arkansas' defensive coordinator. Arkansas won a battle with Florida State to sign him.

"The thing I like most about this group is they want to be part of Arkansas," Pittman said. "Now, you're going to say, 'Well, we know that.' But by 7:47 this morning, we had all [of today's signees] scholarships signed. And I think that shows you that they want to be here, that they're all excited about being here."

Pittman and his staff wrapped up their first class with a wide-ranging group from 10 different states, led by four each from Arkansas and Georgia.

The Razorbacks went hard on defense, with 13 of the group on that side of the ball.

Pittman and his staff targeted five positions of most critical need: quarterback, tight end and all three levels on defense.

"When I say needs, I'm not talking about talent, I'm talking about numbers," Pittman said. "On our board, our numbers were low -- what we consider low -- on the defensive side of the board, at tight end and quarterback, so we went up there and tried to address those needs."

Hornsby's announcement was made on ESPNU on Wednesday afternoon. He chose the Razorbacks over offers from many other schools, including Baylor, Alabama, Auburn, Georgia, Mississippi State, North Carolina, Oregon, Tennessee, Texas A&M and others.

"Malik, he's the guy that we wanted," Pittman said. "He's the guy we went after."

Offensive coordinator Kendal Briles had a long-standing relationship with Hornsby and his family from Missouri City (Texas) Fort Bend Marshall.

"Kendal did a great job of recruiting him and has for a long time," Pittman said. "But there's a guy who can throw it and run it, and certainly would be ideal for the type of offense that Kendal is planning on running."

Hornsby and graduate transfer Feleipe Franks, the 6-6 former starter at Florida, join a quarterback room that was down to three scholarship players in junior Jack Lindsey, sophomore John Stephen Jones and freshman KJ Jefferson, who each had one start in the final three games of last season.

Hornsby announced he would "for the next three or four years be attending the University of Arkansas" on the televised ceremony.

Hornsby said he hoped to come in and start, and if not to "learn the system and hopefully get a national championship."

"Feleipe Franks has proven he can do it in this league and do it at a high level," he said. "It's a huge deal for us. I'm not saying he's going to win the starting spot, but it's a big deal to get him. It will allow some of these young guys, KJ and all of them, to compete and get a little bit more time to get game ready."

The linebacker group was specifically targeted, and it led to a group of five signees at those spots.

Pittman said he got excited when he talked to Odom and linebackers coach Rion Rhoades about the linebackers Arkansas was trying to land.

"Rion Rhoades proved that you don't have to have experience at the D-I level to be an elite recruiter," Pittman said. "He went out there and we really addressed that linebacker and that D-line position.

"Our defensive board, I think we had 13 guys, 14 guys committed early. So I think that guys want to come in and play for coach Odom and those guys."