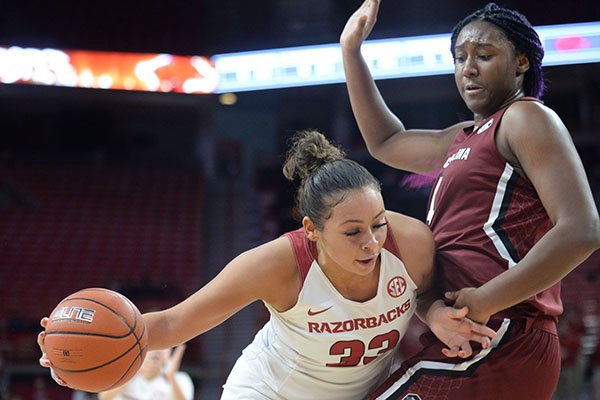 Arkansas guard Chelsea Dungee (left) drives to the basket Thursday, Feb. 6, 2020, as she is guarded by South Carolina forward Aliyah Boston during the first half of play in Bud Walton Arena.

FAYETTEVILLE -- South Carolina's Aliyah Boston hurt her leg in Sunday's 69-48 victory against Tennessee and did not return to the game.

She was feeling much better Thursday night in the No. 1 Gamecocks' 86-65 victory over No. 25 Arkansas at Walton Arena.

The 6-5 freshman flirted with a triple-double before settling for 18 points, 15 rebounds and 7 blocked shots in a dominating performance at both ends of the floor. She also missed just 1 of 8 shots and made all 4 of her free throws.

"She was actually a game-time decision tonight," South Carolina Coach Dawn Staley said. "She didn't practice the last two days, just trying to rest that lower leg. She felt good in the shoot-around and good warming up. Luckily for us, she played."

Boston's length was one reason the Razorbacks struggled from the field, making 26 of 73 shots (35.6%). Arkansas leading scorer and 5-11 junior guard Chelsea Dungee scored a team-high 16 points, but she was 7 of 25 from the floor.

"She definitely affects the game a lot both offensively and defensively," Dungee said of Boston, who volleyball spiked one of Dungee's field-goal attempts. "Offensively, it's hard to stop a 6-5, 6-6 player. Then when you drive it, you have to adjust your shot. That makes it difficult."

"I guess she has the principle of verticality down," Staley said. "She doesn't lean over too much. I think her ability to block shots, it's more about understanding personnel. She understands scouting reports and players' tendencies. So I think part of it is timing, part of it is understanding where people like to go on the floor.

"I've never been around a young player that has all of those attributes."

South Carolina jumped to a 9-0 lead and was never seriously threatened. Tyasha Harris made a three-pointer with 9:14 remaining in the first half to put the Gamecocks ahead 31-19, and they would lead by double figures the rest of the way.

Down 41-24, Dungee scored all of the Razorbacks' points during a 9-2 surge that saw them creep within 43-33. Zia Cooke's three-point play gave the Gamecocks a 46-33 edge at halftime.

Arkansas Coach Mike Neighbors said his team made too many mental mistakes to compete with the Gamecocks, which won their 16th game in a row ahead of a Monday showdown with No. 3 Connecticut.

"You cannot have any lapses against the No. 1 team in America," Neighbors said. "They're too good, too balanced, too well-coached ... they're too everything."

South Carolina, which entered the game with a plus-12.8 rebounding margin, outrebounded the Razorbacks 57-31. Harrigan added 25 points and 9 rebounds, and every South Carolina starter had at least 5 rebounds. Dungee gathered seven rebounds for the Razorbacks, but no other Arkansas player had more than three.