State of the Hogs: Henry happy to be back in Fayetteville 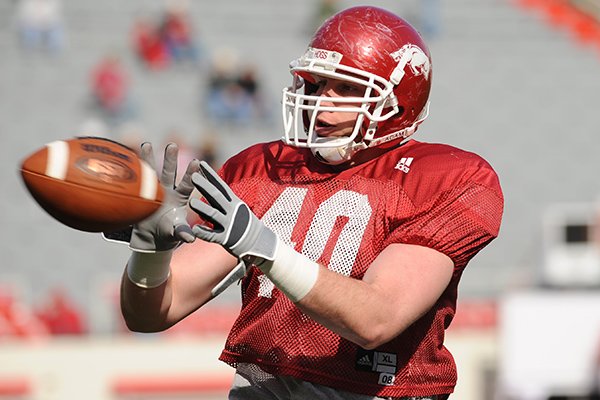 It was a chance to meet Sam Pittman’s 10 new assistant football coaches, the first day they had a spare moment after playing catch up ahead of Wednesday’s National Signing Day.

I tried to meet a few of them Thursday afternoon at the interviews at the football offices, but mainly to talk about the five coaches on Pittman’s staff that never have a spare moment. Those are the quality control coaches, the five-workaholic staffers most will never know or notice.

Coordinators Barry Odom (defense) and Kendall Briles (offense) gave me the scouting report on their guys.

Odom brought Michael Scherer, one of his former players, from Missouri and inherited John Roberts, a five-year quality control assistant at Arkansas.

Briles brought Michael Anthony and Mark Cala from Florida State. Briles gave me some tidbits about both. I gave him more than he knew about the fifth, my nephew, Joseph Henry.

Actually Joseph is no relation. But the former Arkansas tight end has always referred to me as his uncle, following a cue from his dad. Cliff Henry lettered for the Razorbacks from 1979-81, a tall, lean, fast safety from Conway who was a fierce hitter on special teams.

Kyle Parkinson, the UA ace in communications, came out of the staff room with Joseph soon to follow. Just before the interview began, Kyle said, “Are you Joe’s uncle?” No, but I explained that I’ve known the family forever.

I lived next door to Bob Henry’s law office in Conway when I was working for the Log Cabin Democrat. We often mowed yards at the same time, but not before Cliff’s father would ask about the Conway Wampus Cats, the UCA Bears and the Razorbacks. Bob could talk details.

I started seeing Cliff and his wife Judy, now Pittman’s agent, at Arkansas practices in about 2007 when Joseph was working his way through the depth chart as a walk-on tight end. He lettered in 2009, then stayed on with Bobby Petrino as a graduate assistant.

It appeared Joseph was going to hang on with Bret Bielema. Joseph was assigned to Pittman as O-line grad assistant and began to study drill tape of his practices. But five weeks into that process Garrick McGee offered him a full-time job as tight ends coach at Alabama-Birmingham.

“I went into to see Coach B about maybe staying here and finishing my Masters,” Joseph said. “He said, ‘No, you are going to get on the field. You’ve got to take that job.’”

Now, he’s right back where he started, in a similar position. He’s assigned to new offensive line coach Brad Davis, although quality control coaches can’t be on the field.

In the middle there was four years at Prairie View A&M, then one year at Florida A&M, two historically black colleges. Willie Simmons, former Clemson quarterback, was the head coach at both. Henry quickly became his right hand man.

“What I’ll say about those five years was that it was tough,” Henry said. “Tough, in that it seemed the last thing I got to do was coach. The two hours on the field coaching was the one escape I had each day.”

“I’d been a GA at Arkansas in 2010 through 2012 and you just get to see a lot of different things, do a lot,” he said. “So Coach Simmons made me tight ends coach, special teams coach, running backs coach, video coordinator and director of football operations.

“There was no down time. Looking back, I appreciate that I got to see all of those ends of what goes into a program because it forced me to learn it all.

“I’d like to be a head coach some day, so learning the inside of everything is important. I learned how a team functioned, from travel to compliance.

“But I might head to practice trying to make sure what time the plane was going to pick us up for a game two weeks later. But when practice started, that was my safe haven. I didn’t have to take any calls.

“Willie became a great friend, a great man. But when he became a head coach, he spent a little while trying to do everything. He wasn’t good at delegating. He figured out finally that he could give anything and I’d get it taken care of. A lot of stuff ended up on my desk. Willie would say, ‘Joe do you mind?’ I did it all.”

There was one more thing he did, a request from his mom. He had to finish his Masters.

“I took a little while to get my Masters,” he said. “I started it in 2010, finished it in 2017. It was online courses. That was in Human Resource Work Force Development. My undergraduate degree, a double major in Finance and Marketing.”

Both diplomas say University of Arkansas. He’s glad to be back home, although things look different.

“My old office was in the Miller Room in the Broyles Center,” he said. “It’s gone. Where we practiced is now a parking lot between our offices and the stadium.

“It’s cliché, but it’s absolutely true; as much as things change, it’s all still the same,” Henry said. “There are still a lot of the same people here. Clarinda Carr lit up when I came down the hall for the first staff meeting. Bobby Allen is here. Jon Fagg is still here.

“I got to know Jon when I was here previously, and there were times that I called him from my other schools to figure out a compliance question. He was always helpful.”

The move from FAMU to Missouri came just before the start of last season, not an ideal time. The question about interest was in the form of an Odom text, an unknown number. Odom found out about Henry in a different way.

“He heard about me through my best friend’s father-in-law, Larry McBroom,” Henry said. “McBroom is now the coach at Sheridan High School.”

McBroom was a legendary coach at Ada, Okla., where Odom grew up.

“I figured Garrick McGee told him about me, but it was Coach McBroom,” Joseph said. “Now, he bounced it off of Garrick when I told him I’d worked for him at UAB.”

McGee was coaching quarterbacks at Missouri.

“I was assigned to help Brad Davis with the O-line, the same thing I’m going to do here,” he said. “Brad is awesome.”

Being back at Arkansas is even more awesome. Coaching against the Hogs last year in Little Rock when Missouri won, 24-14, provided some interesting twists. There were some brief conflicting thoughts.

“I’ve never told anyone, but I whistled the (Arkansas) fight song in the press box by accident once,” Henry said. “I stopped myself. I don’t think anyone else realized it, but that was weird.”

Then, there was an instant when he got confused on who “we are” on the scoreboard.

“We were on defense, so I didn’t have as much to do and I looked up at the scoreboard and saw the 14 by the Razorback and 10 by the Tiger, and thought, ‘We are ahead,'" Henry said. "No, that was wrong. I’m with the Tigers, not the Razorbacks. I got rid of that thought pretty fast. So that was two slip ups.”

Usually, there is no time for the mind to drift for a quality control coach. There’s just too much to do.

“The older you get, the more you realize that the quality control role is vital,” Odom said. “They are of huge importance to me. I’ve used them to help game plan, give me a look from a different lens and someone who is going to be here with us for long, long hours.

“I hire smart people who are not going to be a yes man. You don’t want that.”

That’s understandable because part of the job is the critical self-scouting that alerts coaches when they are getting too easy to predict.

“You need to surround yourself with great coaches,” he said. “We hired Sam Carter to coach our corners here. He had been a quality control assistant the last four years at Missouri and he was probably the best coach we had in the building. He’s a rising star.

“You better surround yourself with value. Joseph is like that with Brad and we are glad to get John Roberts from the offensive side (to be a defensive QCC). I see great value in him because he’s got a different perspective, moving over to our side of the ball.”

It’s hard to detail all of the job description of a quality control coach. Briles heaps a lot on his three staffers.

“They are incredibly valuable,” he said. “We are in the first year of installing a new offense. They are going to get in film of what we’ve done, collect the data, organize our play books, get them printed, get break downs on video and all of the data that goes with that.”

All of that has to happen in a matter of days. The Hogs begin spring practice on March 16.

“During the season, they are going to do the opponent breakdowns and also continue to provide our self scout,” Briles said. “That Michael and Mark have been with me is a big asset. We speak the same language.”

That Henry has worked with Davis – and briefly with Pittman – is an asset, too. It’s interesting to hear his breakdown of the job description.

“At the end of the day, the quality control coaches are doing anything to help the coaches with time management,” Henry said. “If there is something that takes 20 minutes that they can give to us, then that’s an asset. It might be a menial task that they don’t have to stop to do.

“Now it stinks that we can’t help much at practice, but we can meet with players. It might be to help someone one-on-one who is struggling to learn something. We can be like a tutor.

“But it’s really an all inclusive job. In the offseason we are helping with recruiting. In season, every document that is used probably we printed it.

“The self scout is important. It really hits after about three or four games. You evaluate trends and make sure you aren’t doing something too suspicious. But in the end, it might be something as simple is getting coffee.”

No doubt, coffee is consumed in mass quantities. Late nights are the rule, not the exception.

And, none of these guys are getting rich.

“What we hope,” Odom said, “is that they don’t do this long. We don’t want to keep them. We want them to advance in the profession.”

There is pay for the quality control staff, but Henry said the key breadwinner is wife Grace.

“She’s an attorney and has a good job,” Joseph said. “It’s allowed me peace of mind to do this.”

Obviously, that runs in the family. His parents are attorneys. It doesn’t take much for Joseph to get started talking about his mom, the agent.

“I know she’s good at it and was important in Coach Pittman getting the Arkansas job,” Joseph said. “She’s brilliant. It’s hard for me to separate all that she is; mom, sports agent and everything else she is.

“She has incredible knowledge. She understands so much. She’s helped me make good decisions. Her advice is always good.

“I know she’s good at relationships and that was important in what she did to help Coach Pittman get this job.”

It is all about relationships and networks. And, for the record, I sure would like to be related to this Henry network.