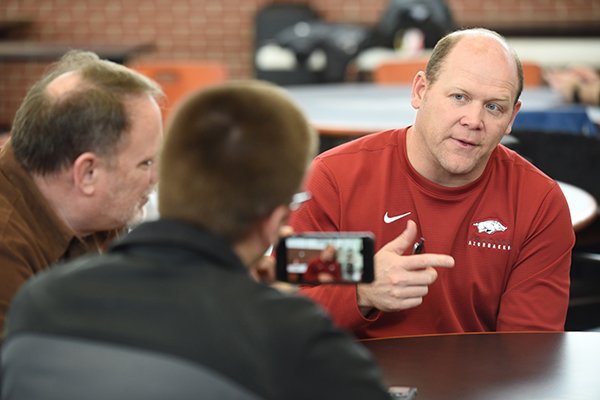 FAYETTEVILLE -- With the rush of two signing days in two months behind them, the University of Arkansas football coaches are turning their attention to critical steps they must take between now and the start of spring drills March 16.

There are playbooks to absorb and install on each side of the ball, practice plans to create and relationships to build. It will be a nearly nonstop blitz for Coach Sam Pittman, his 10-man on-field staff and their assistants.

"The most important thing we have right now is building relationships with our current team," defensive coordinator Barry Odom said. "They don't know me, and I don't know them. We don't know names.

"But really the substance of building a relationship takes time. I'm going to pour into them and provide them the opportunities to get ready for spring practice. If we can do that, we'll have started the foundational approach of moving this program forward."

The 10-man group of assistants conducted an hour's worth of interviews Thursday at the Smith Football Center the day after the Razorbacks completed a 20-man signing class that earned a No. 30 ranking by 247Sports.com.

The Razorbacks were in catch-up mode on the recruiting trail as Pittman's staff was assembled in December, and now they're meshing en masse as a staff.

"We really hadn't had the opportunity to do that much, just going through the offense," Briles said.

[Video not showing up above? Click here to watch » https://www.youtube.com/watch?v=00yo1-_ikq0]

"I learned the first formation today," said Justin Stepp, the third-year receivers coach and only carryover from Chad Morris' staff. "We've been in there and talked kind of philosophy stuff, but as far as learning what we're doing, we had our first meeting today. So I'm about two hours in and really excited about it."

There's a major difference between the Morris/Joe Craddock offense and the one Briles is bringing to the Razorbacks. He expects to have a much larger percentage of the schemes in place before the season opener against Nevada on Sept. 5. Morris and Craddock talked about having about 30% of their offense in place heading into 2018.

"I plan on having 85% of what we do in by spring ball," Briles said. "There's no reason not to. That gives us 15 spring practices. I know we'll get some time built in through our strength program to be able to be on the field, not with footballs or anything, but being with the guys. So I don't see why there's any reason we can't have that, depending on our personnel.

"If we don't feel good about a certain personnel grouping, then we won't be able to run that. Yeah, you'd like to have everything in. That way when you line up against a body you're ready to go."

[Video not showing up above? Click here to watch » https://www.youtube.com/watch?v=hd7HMfCnt7g]

Odom was asked whether his base defense will be a 4-3 or 3-4 alignment.

"Yes," Odom said with a laugh. "It's going to depend on the skills that we have. I'll say we'll be very multiple, especially this first year, until we get a good feel for what our kids can do, and how well we can teach them."

The Razorbacks' 15 days of spring drills will come with spring break in between and end April 25.

Arkansas is scheduled to play the Red-White game at War Memorial Stadium in Little Rock, but it is not guaranteed. UA officials have to get clearance from the SEC office to conduct their spring game anywhere other than campus, as they did in 2018 when Reynolds Razorback Stadium was undergoing north end zone renovations.

[Video not showing up above? Click here to watch » https://www.youtube.com/watch?v=-7HCF4BT8P8]

"It was scheduled at Little Rock, and I don't know exactly where that's at right now because we don't know if the [SEC] will let us have it over there," Pittman said Wednesday. "If they will, than that's where we're going to play it. If they won't, we'll play it back here at home."

The Razorbacks improved 15 spots in the recruiting rankings on national signing day, winding up 11th in the SEC.

"I think we finished up the way Coach Pittman wanted us to finish up," cornerbacks coach Sam Carter said. "We were behind a little bit, but every guy came in hitting the ground running."

Said Stepp: "For the little bit of time we had, I thought we did a heck of a job. These guys did a really good job. We've got some really good recruiters, so that's a refreshing thing to be around to kind of see how other guys do it."

[Video not showing up above? Click here to watch » https://www.youtube.com/watch?v=2zPbW9Q1HFg]

Defensive line coach Derrick LeBlanc will work with the largest group of newcomers Arkansas landed, with six signees targeted for the defensive front.

"They're newcomers, so we don't know much," LeBlanc said. "You always recruit and evaluate off potential. We all know what potential means, right? It means absolutely zero until they put the work in.

"But speaking on that potential, I think the six guys we did sign have potential to be really good football players. We went really athletic with this group."

[Video not showing up above? Click here to watch » https://www.youtube.com/watch?v=pDE0o2BdKLM]

"We looked at how you build the roster and things that you need, and not to diminish at all what our current team looks like, but also we looked just at developing some depth," Odom said. "Areas of need we needed to get in here immediately.

"That's kind of why the numbers aligned like they did for this year's signing class. Next year, I'm sure the numbers will be different but we needed that for the here and now and we're excited about who we were able to get."

The Razorbacks are engaged in winter strength and conditioning under coach Jamil Walker and his staff. Pittman said Walker apprised the coaching staff on the progress of individuals and position groups recently.

"I'll tell you, we hit the jackpot with coach Walker and his staff," Pittman said. "We've seen them work out. Great energy, and we're getting bigger, we're getting stronger.

[Video not showing up above? Click here to watch » https://www.youtube.com/watch?v=1FoU3OSohQs]

"Right now we're a little more concerned about getting some bulk on our guys, some confidence through the weight room, than we are necessarily about as much getting them in shape for spring ball. I think we're going to buy another week in the weight room for size and strength before we head to the conditioning."