Whitt in familiar position vs. Tigers 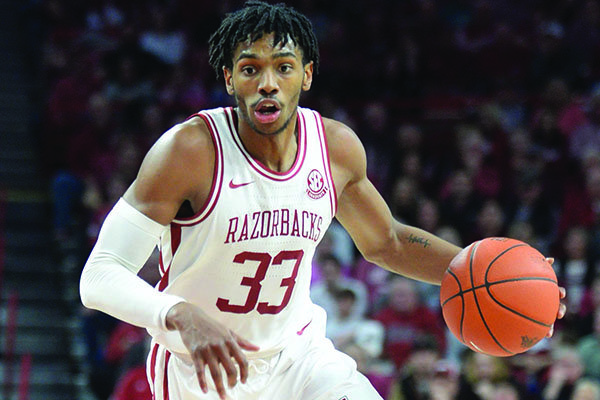 Arkansas guard Jimmy Whitt (33) looks to drive to the lane Saturday, Jan. 25, 2020, during a game against TCU in Bud Walton Arena.

FAYETTEVILLE -- Four years ago when Jimmy Whitt had his only scoreless game as a freshman for the University of Arkansas, he bounced back with a big homecoming performance.

Whitt, who is from Columbia, Mo., returned to his hometown and scored what was then his career-high 15 points to help the Razorbacks beat Missouri 94-61 at Mizzou Arena on Jan. 12, 2016.

In No. 11-ranked Auburn's 79-76 overtime victory over Arkansas on Tuesday, Whitt was held scoreless for the only game of his second stint with the Razorbacks as a graduate transfer.

Arkansas' next game is against Missouri on Saturday at Mizzou Arena.

"It depends on how I end up playing in this game," Whitt said with a laugh. "Because if I go scoreless again, I guess it wouldn't be fate."

Whitt, a 6-3 guard who starred at Columbia Hickman High School, said he'll be ready to play against the Tigers despite missing Thursday's practice with a sore back.

The Razorbacks were off Wednesday when Whitt had a magnetic resonance imaging scan, which Coach Eric Musselman said came back negative and ruled out a serious injury.

[Video not showing up above? Click here to watch » https://www.youtube.com/watch?v=4TW8M1xuvkY]

"His back has been bothering him for sure," Musselman said. "He's been in getting a ton of treatment."

Musselman said the Razorbacks will have a light practice today before traveling to Columbia.

"So in reality, Jimmy's kind of going to get three days off because I don't really need him to do anything [today], either," Musselman said. "Just need him to wake up Saturday morning and feel fresh."

Whitt said he's hopeful history will repeat itself in his second game at Missouri.

"I'd like to go there and play well, but my biggest thing is going there and trying to get a win," Whitt said. "That's what matters to me at the end of the day. Winning is going to go a lot farther for us than me playing well."

Whitt is averaging 14.7 points this season, but 18.8 in the four games after he had scored seven or fewer points in the previous game.

"The times where Jimmy's had low-scoring games, he comes back and has some of his better games," Marcus Whitt, who played basketball at Columbia (Mo.) College, said of his younger brother. "So I expect him to have a good game at Missouri, and I'm really excited for him to play back in Mizzou Arena because that's like a home game for him.

"Jimmy grew up playing on that court. He competed for a state championship there. Being back home in that environment, he'll be completely comfortable."

Whitt shot 0 of 7 against Auburn and ended a streak of 60 games -- going back to his redshirt sophomore season at SMU -- in which he had scored. He took one shot in the second half.

"I thought his back stiffened up noticeably in the second half," Musselman said. "He didn't have the same mobility that maybe he did early in the game."

Whitt didn't want to use his back pain as a reason for going scoreless.

"It's definitely getting better," Whitt said. "It's just one of those things you've just got to take it day by day. It's not something I would use as an excuse for anything. That last game, it just wasn't my night. I didn't play well.

"I definitely know I've got to step it up. I can't have performances like that, especially when we're down numbers already with Isaiah Joe being out."

Whitt, who had 7 rebounds, 3 assists and 1 steal against Auburn, said he wanted to get shots for his teammates rather than himself after his first-half struggles.

"It wasn't my game," Whitt said. "You've just got to know that. You've got to see who's hot. Other guys were making plays."

"Scoring's not something I'm just going to hang my hat on," Whitt said. "Other guys were hitting shots."

Manny Watkins, who was Whitt's teammate at Arkansas and has been his friend since both were in elementary school in Columbia, talks with Whitt almost every day. They spoke about two hours after the Auburn game.

"Jimmy's a fifth-year guy -- he's an old man," Watkins said with a laugh. "He wasn't going to stay down about what happened against Auburn.

"He hated that he didn't play better, but he knows it was just one of those games that every player has sometimes. He's played great this season, but he just didn't have it against Auburn."

"I honestly feel like Jimmy is going to have a great game," Bailey said. "He's a vet. He knows the game, and he's going home. It's one of his last times to compete in front of his family, so I feel like he's going to take it personal. We're going to get Jimmy back."

Saturday definitely will be the last game Whitt plays in Columbia for the Razorbacks.

"After my freshman year, I never thought I'd get to play there again in front of my hometown family and friends," Whitt said of his transfer to SMU. "So I think that's the coolest thing on my part."